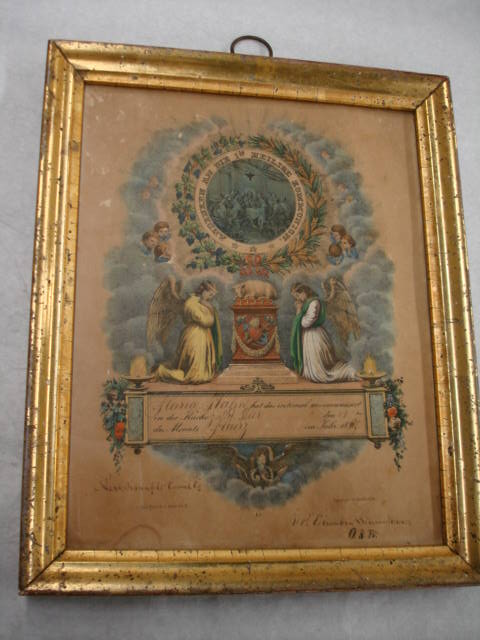 This is a framed First Communion Certificate, from St. Peter and Paul Catholic Church in New Braunfels, Texas. In the Catholic faith, a child goes through three sacraments: baptism, communion, and confirmation. Out of the seven sacred sacraments, these three are the most important in the early years of a child’s life, and part of the journey in bringing them into the Catholic faith. The seven sacred sacraments are ceremonies that Christians participate as part of their devotion to God as Christians. The First Communion ceremony is an important celebration for Catholic children, their families, and the church community. Children typically have their First Communion around the age of 7 or 8. Prior to receiving Communion, the child will have participated in confession, and may be asked to actively participate during the Mass on that day, and often assist in decorating the church for the occasion. Girls typically wear white dresses and boys wear suits as part of the ceremony, which often includes a procession or special gathering for the children prior to receiving their First Communion. After the ceremony and accompanying Mass, the families will often have a small party to celebrate and the children are usually given gifts and a First Communion Certificate to mark the occasion. This certificate was made in 1867, and is written in German, as German immigrants were building their settlements in Texas.

The town of New Braunfels, Texas was established in 1845 by German immigrants who came to Texas during the mid-19th century. The German population was the largest of the European ethnicities that came to Texas by entering through Galveston Island. The location of New Braunfels proved beneficial as it was close to the Guadalupe River and Comal River, giving the community access to fresh water. Once settled in New Braunfels the German Catholic community built its religious center, St. Peter and Paul Catholic Church, during the mid 19th century.

In the Catholic Church, baptizing a child is considered a promise to raise that child as a Christian so that they can become active members when they are adults. That child’s First Communion is an active step on the part of the child to become fully integrated members of the Catholic community, whereas the baptism was their family’s choice. Confirmation is the final step, as this ritual is when the child decides that they want to live their life as a devout Christian and accept Christianity as their faith.