This item is a $1.00 change note issued by the Republic of Texas in 1841. This particular type of currency consisted of low denomination ‘change notes’, which were commonly redeemed for larger denomination notes. Many stores, cities, and states commonly issued their own forms of currency during the 18th and 19th centuries.

The Republic of Texas began issuing its own currency in 1837. Due to limited supplies of metals throughout the United States at the time, the Republic of Texas did not mint coins, but rather only supplied paper currency. This early type of paper currency commonly bore the name “Star Money” due to the prevalence of star-shaped designs printed on the paper currency. Other common themes printed on the currency included: commerce, industry, agriculture, and other images specifically associated with Texas. Each bill was hand-signed by both the president and treasurer of Texas.

The Republic of Texas printed other types of currencies, including: change notes, “redbacks”, and exchequer bills. Currencies issued by other states and foreign nations were still available to the general public, but the Texas government attempted to restrict the use of non-local currency through several laws and regulations. 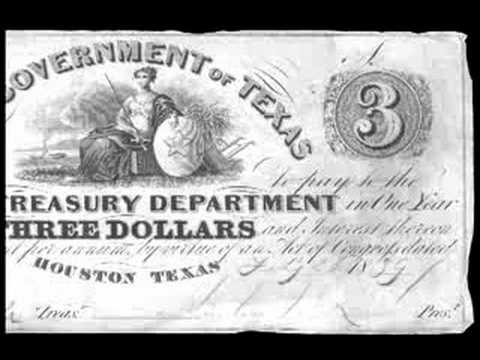 Click the video above to view a further discussion of Texas currency can be found in the following video, produced by University of Texas-Arlington Special Collections.

— By Catherine Sword. Edited by Kathryn S. McCloud.
Additional Resources
Back To Collection Blog
Join Our Newsletter!
Get the latest news & updates about ITC.
Sign-Up Today!