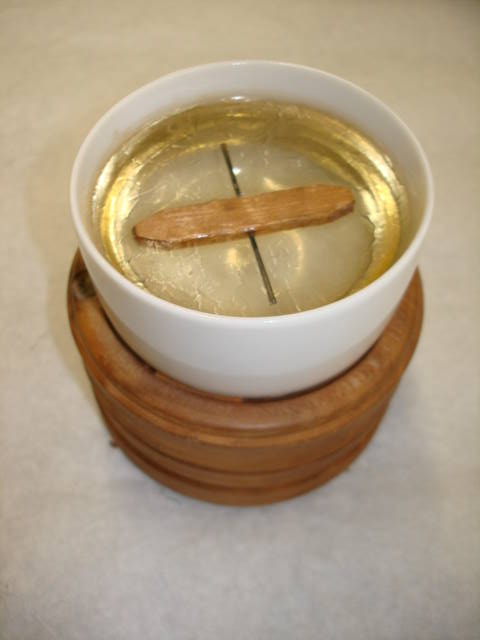 Exploration is how many countries were born, without exploration we would not have the United States, we would not have the technologies, foods or even cultures that we experience today. Yet, every good explorer needs tools to help them navigate across the worlds’ terrain or vast seas. At the very least an explorer should know which direction they are going, and the compass was one of the first tools created to help give us direction. This replica compass has a small cup on a wooden base, along with an iron and wood crosspiece. This compass design is used by filling the cup with water and floating the wood and iron crosspiece in the water. The iron, if magnetized, will be pulled toward the north. Rubbing it with a magnet or lodestone can temporarily magnetize the iron or any other metals.

The lodestone is a naturally occurring stone with magnetic properties. Suspending the lodestone from a string or floating it on a piece of wood allowed it to move toward the northern magnetic pole, the north, because of its magnetic properties. How the lodestone itself is created is still debated. One theory suggests that lightning magnetizes the stones. Evidence to support such claims is that lodestones are often found near the earth’s surface, where lightning would be able to reach them. The origin of the name lodestone comes from Middle English, lode meaning way or course. Thus, the literal translation gives us the way or course stone, used by early mariners to show them the way.

Before the compass the stars in our solar system were the main tools used to identify north, south, east and west. With the sun rising and setting the same way each day and stars mapping out what we today call constellations, a pattern was formed and directions were set. Directions, before the compass, were based on landmarks, such as a tall mountain or common streams. Some even claim that these early ways of giving directions is how Europe got its name, from the Phoenician word Ereb, meaning ‘toward the setting sun’. As the business of trade was important to many counties, devising a way to determine direction was crucial. It is not known for certain when the first compass was discovered, but the Chinese were amongst the first to write about the compass. With the discovery of the lodestone we find evidence of the earliest directional tools. Interestingly enough,  early Europeans thought they were being pointed north, meanwhile the Chinese, using early compass technology, thought they were being directed south. This leads us to another confusion at hand, the moving north.

Now the north isn’t actually moving, but the magnetic north is, which is the direction that a compass leads you. Our magnetic north is shifting because it uses magnetic properties from the magnetic field of the earth. As the earth’s hot liquid core shifts it sends out electrical currents that make up the earth’s magnetic field and this changes the location of our magnetic north. It is still accurate for general direction but the compass can’t lead you to the geographical north pole. The geographical north, also often referred to as the ‘true’ north, is a fixed point in our Northern hemisphere. It is believed that mariners, most often our earliest known compass using explorers, were the first to notice the deviation between the true north and magnetic north. Thus, by the 1500s we had substantial mapping of the earth’s magnetic field, but it was later explorer John Ross, along with his nephew James Clark Ross, that would first locate the magnetic north pole.

Geologists have watched the magnetic north travel ever since, through traces of paleo-geomagnetism, which is just a long word for the study of the history of earth’s magnetic field found in rocks and minerals. They found that the magnetic poles of the earth have actually traded places several times over thousands of years. So the north we see on the compass today was once actually the southern magnetic pole, but the poles will switch again, so keep an eye on your compass.