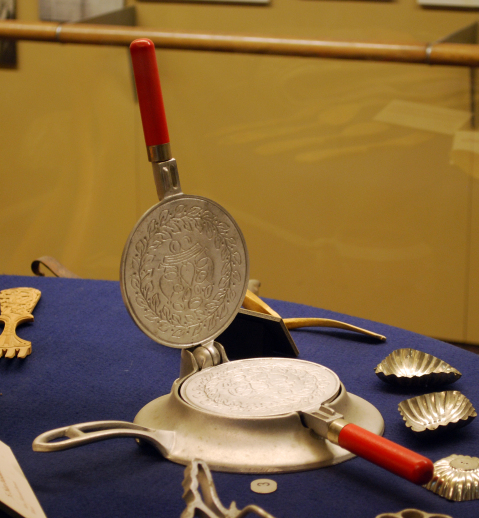 This object is a Norwegian krumkake iron. Not to be confused with crumb cake, this Norwegian cookie is pronounced kroom-kai-kuh, and means bent or curved cake. The plural is krumkaker. Krumkake is a traditional Norwegian Christmas cookie. Krumkaker are made from flour, sugar, eggs, butter, and cream. They look and taste very similar to waffle cones, and are made in a device that looks similar to a waffle iron.

Krumkake irons are decorative two-sided iron griddles, with intricate patterns that vary based on what region of Norway it’s from. Older irons were designed to be held and turned over an open fire, and had wooden handles to be able to turn them without getting burned. Newer versions are electric, and allow bakers to make more, in a shorter period of time.

Once the batter is poured onto the griddle, it’s baked to a light golden brown. While still hot, it’s rolled into small cones with the use of a conical rolling pin. Krumkaker can be filled with virtually anything- from whipped cream, to chocolate, to berries, or can just be sprinkled with powdered sugar.

It wasn’t until the 19th century that the term “Christmas cookie” became popular, possibly due to the fact that ovens became popular household appliances around that time. However, cookies in Norway were categorized as one of three types: those baked in an iron, those that were deep fried, and those baked in ovens. Cookies baked in irons- like krumkaker– can be traced back at least a thousand years.

In the pre-Christian Viking tradition, during the dark afternoons of the Winter Solstice, children would go from house to house looking for treats. Because Norway is so close to the North Pole, darkness came by 4 o’clock during the months of December and January.

Before Christmas began being celebrated in Norway, around 1000- 1100, Norwegians celebrated Jul (the English tweaked this to yule) a time to celebrate the last of the harvest, and a way to look forward to spring. It was a celebration of light manifested through the yule log thrown on the fire.

Norwegian Christmas is a celebration of more than a thousand years of beliefs and traditions, all tied together in a month-long celebration. The baking, the solstice, the celebration of light, and Christian faith, all come together for the holiday season.

Perhaps this explains why krumkake has endured. Today, it is a featured element in the tradition of “seven sorts,” which is a Norwegian holiday baking custom. Per tradition, seven traditional cookies are to be baked and served during the holidays. Although which cookies are included in the seven are disputed, krumkake is the most widely accepted, along with pepperkaker (gingerbread).

Norway’s holiday traditions are still honored by Norwegian immigrants and their descendants across the American mid-west, and communities in Texas. The krumkake is just one of many elements of Norwegian tradition that interlock the past and the present.