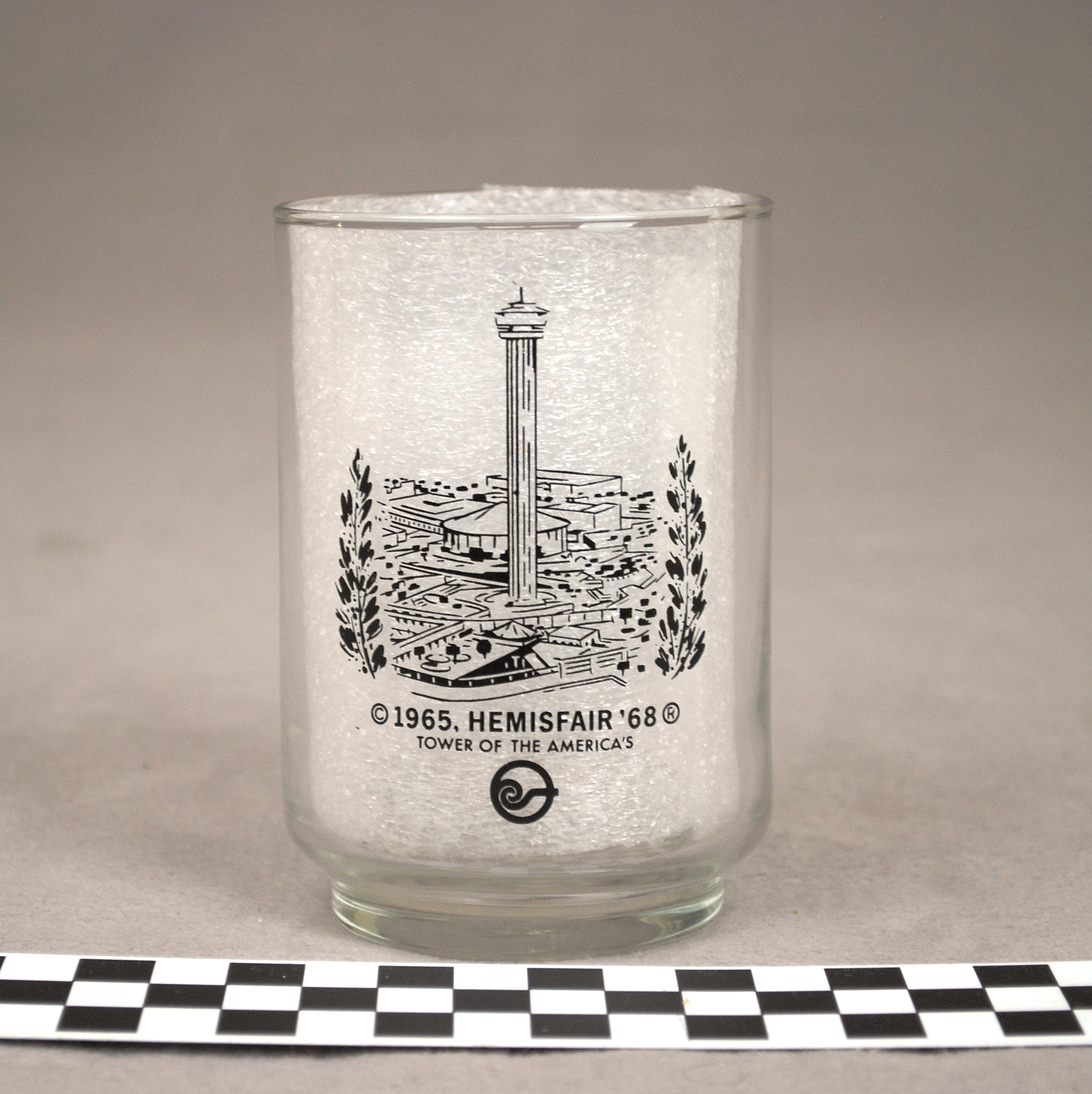 This object is a glass souvenir cup with the scene of the Convention Center and Tower of the Americas printed on it to represent HemisFair ’68. HemisFair ’68 was the World’s Fair held in San Antonio, Texas from April 6th to October 6th 1968. The fair’s theme was “The Confluence of Civilizations in the Americas” and celebrated the multiple nationalities settled in Texas. It coincided with the 250th anniversary of the founding of San Antonio which was one of the first major cities established in Texas.

The World’s Fair is an international exhibit that generally lasts three to six months. It includes industrial, scientific, and cultural items as well as entertainment in the form or rides, shows, food, and drinks. Britain and France were the first to hold small scale fairs which culminated into the first World’s Fair in 1851. This first fair was called the Great Exhibition, also known as the Crystal Palace Exhibition, and was held in London’s Hyde Park. Since that time there have been over 100 other world’s fairs held in 20 different countries around the world.

The 1968 World’s Fair began its planning in 1959 when it originally was meant to be a fair to celebrate the connections San Antonio shared with Latin America. The name HemisFair came from this idea, inspired by merchant Jerome K. Harris. Ewen C. Dingwall was soon brought in as the executive vice president because of his experience with the Bureau of International Expositions in Paris, which regulated the World’s Fairs. By 1965, HemisFair gained its international status and World’s Fair 1968 planning began.

The HemisFair wasn’t as successful as the planners had hoped, with financial troubles costing the city $7.5 million by the end. Still, the exhibit included more than thirty countries throughout North America, Europe, and South America as well as a few from Asia. Entertainment included artworks from the renowned Prado Museum in Madrid, celebrity entertainers, and groups such as the Ballet Folklórico de México and the Bolshoi Ballet from Russia. More than 6.3 million visitors attended and multiple corporate exhibitors.

The 1968 World’s Fair had a lasting impression on the San Antonio landscape. It created the Henry B. Gonzalez Convention Center, and the Tower of Americas which is an iconic part of the San Antonio skyline. HemisFair also brought about the UTSA Institute of Texan Cultures. The desire to represent the civilizations that contributed to San Antonio, and Texas as a whole, continue to be represented and celebrated in the museum today.