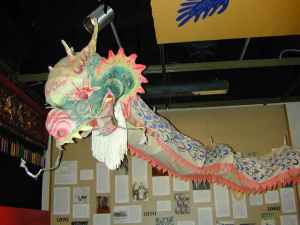 In western society the thought of dragons conjures up fearful images of large lizards that can fly and breathe fire. Often dragons are perceived as evil and a menace upon the land. Knights of legend would ride out and dual with dragons in the hopes of freeing the land and saving a beautiful princess. This image of the evil dragon has gone back for millennia in Greek, Norse, English and German culture and legends. However, the legend of the dragon in Chinese culture is very different.

China and its connection to dragons

The Chinese Dragon, sometimes called the Oriental dragon, is a benevolent creature with the ability to fly and live in the ocean. Dragons in China are often thought to control rain, rivers and other forms of water. The earliest known depictions of dragons in China date back thousands of years, and can be seen in art, jewelry and pottery. Even though dragons have been a part of Chinese culture for a long time, there is still much debate on when and where they originated. The Totem-Worship Theory states that sometime around 2697 BC, China was made up of a number of different tribes who each had a totem depicting an animal or plant. The tribes believed they were blood related to these totems. One of the tribes, was ruled by the first legendary Emperor Huang Di. Huang Di fought against the Yandi tribe for the throne.

Emperor Huang Di’s tribe won and it is thought that his tribe adopted a coat of arms which depicted a snake. Emperor Huang Di soon started waging wars with other tribes in the area. It is believed that every time they conquered one of these tribes they took that tribes totem animal and incorporated it with their own. Many scholars believe that this is why the oriental dragon looks like it is made up from nine different animals, possessing the antlers of a deer; the head of a camel; the neck of a snake; a hawk’s claws; the palms of a tiger; an ox’s ears; a rabbit’s eyes; a frog’s belly, and a carp’s scales. Under Emperor Huang Di’s rule the central plains of China were unified and the symbol of the dragon has remained popular even today.

Two other popular theories are that the dragon is a stylized depiction of an animal, such as a fish, snake or crocodile or that the Chinese dragon represents lightning. Some evidence to support this is the fact that the Chinese pronunciation for the word dragon, lung or long, resembles the onomatopoeia of the sound of lightning in Chinese culture.

Symbolism of the Chinese Dragon

Today dragons are still highly respected in China and many Chinese consider themselves decedents of dragons. Legends say that after Emperor Huang Di died the gods in heaven granted him rebirth as a dragon. This falls in line with the Chinese belief that the dragon is the symbol of the emperor and all emperors of China were believed to be direct descendants of celestial dragons. Ancient emperors called their robes “dragon robes,” their palace a “dragon palace” and their throne “The Dragon Throne.” The close association with dragons in Chinese culture has made it a well known symbol of China.

Where did the Dragon Dance come from?

The dragon dance originated during the Han Dynasty (180-230 AD). While it is usually performed at festivals, like the New Year’s Festival and Lantern Festival, it originally started out as a folk dance. Because dragons are believed to be the bringers of rain, many farmers started to perform this dance in order to honor the dragon. The farmers would hoped that the dragon would be pleased by the dance and in return bring rain to the crops. By the time the Song Dynasty (960–1279 AD), the dragon dance had become very popular and being performed almost exclusively for festival events.

Though the dance may look simple from an outsider’s point of view, it takes many hours of practice for the performers to get and keep the movements of the dragon flowing. If one performer messes up, it can spoil the entire performance. The dragon dance is carried out by a team of performers who carry the dragon on poles. The dragon’s body is made up of a series of hoops with a head attachment on one end and a tail attachment on the other. These dragon props can range from 25 to 70 meters long, with the shorter dragons used for more acrobatic dances while the longer ones are for ceremonial use. The color of the dragon is also symbolic. Most dragons are green, which symbolize the harvest. Gold represents the empire, and red represents excitement and good fortune.