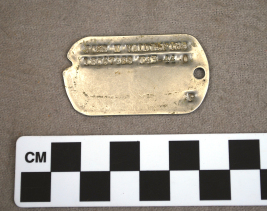 This object is a metal identification tag also known as a dog tag. This tag was worn by Jose M. Valdespino who enlisted in Sept 1942 at Duncan Field, in San Antonio. After training, he was assigned as the Ball Turret Gunner in a B-17 with the U.S. Army Air Corps in the the 367th Bomb Squadron, 306th Bomber Group, based in England. He flew 24 missions with “The Clay Pigeon’s” in a B-17, his missions included the bombing France which was occupied by Germany. Joe’s combat service ended when he was injured in a jeep accident. He was discharged in October 1945.

Identification tags for the military have been used since around the 1850s. The earliest known example where dog tags were used was during the Taiping Revolt in China. The soldiers fighting in this rebellion wore wooden tags on their belt. The information on the tag included name, age, birthplace, unit and the date they were enlisted. In the days of the American Civil War more than 150,000 soldiers were unidentified. Some knew that if they were to perish in the war there was a possibility that they would not be identified. So many went to great lengths to have some sort of identification on them. Many attached notes to their bodies while others wrote their name on their belts, and some wrote their name on the bottom of their shoes.

Example of a identification tag used during the American Civil War. Image via: http://www.ephemerasociety.org

With the high demand for some type of identification tag, merchants started selling metal disks to soldiers. In many periodicals such as Harper’s Magazine there was advertisements for tags called “soldier’s pins” which were made of silver or gold with the soldiers name and unit. By the 1890s dog tags were being issued to the U.S. Army and Navy. By the time the United States entered WWI all soldiers were required to use a identification tag.

During WWII a new type of tag was introduced, this new tag changed in style from a disk to a rectangle tag, known as the M1940. The rectangular tag had a notch at the end like the tag from our collections. It was during WWII that the tags got the nickname “dog tag.” The tags not only had the name of the soldier but also other information such as blood type, tetanus shot information, and religious preference. During WWII however, there was only 3 options for religious preference: Protestant, Catholic, and Hebrew. Since then more options have been added and soldiers even have the option to put “none” or “no religious preference.” Early versions of identification tags included the name and address of the soldier’s next of kin. During the war, the enemy used that information as a tool for psychological warfare, so the practice was discontinued by 1943. Silencers for the dog tags were also introduced during WWII. The silencers were used to prevent the dog tags from making noise when coming into contact with each other. The M1940 tag was in use until it was replaced by the M1967 which was made of a T304 stainless steel. This type of tag has no notch and is what is used today.

With technology being so advanced, the future of dog tags looks promising. The U.S. Army is currently developing and testing dog tags that would use RFID, microchip, or USB technology. The dog tags would hold the soldiers medical information as well as dental records, which would make it easier if in identifying them. These dog tags would be worn in addition to the current ones. The Marine Corps is developing dog tags with advanced technology also including RFID and the possibility of even being able to use GPS data to help locate wounded soldiers. 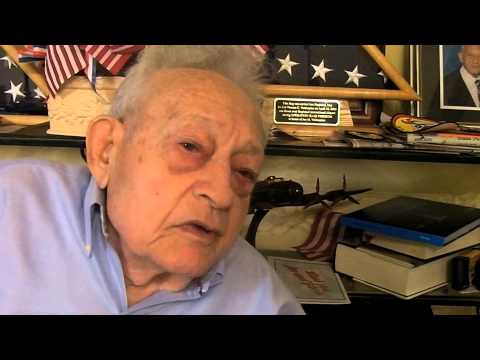 Click the video above to view ‘An Interview with Joe Valdespino’.