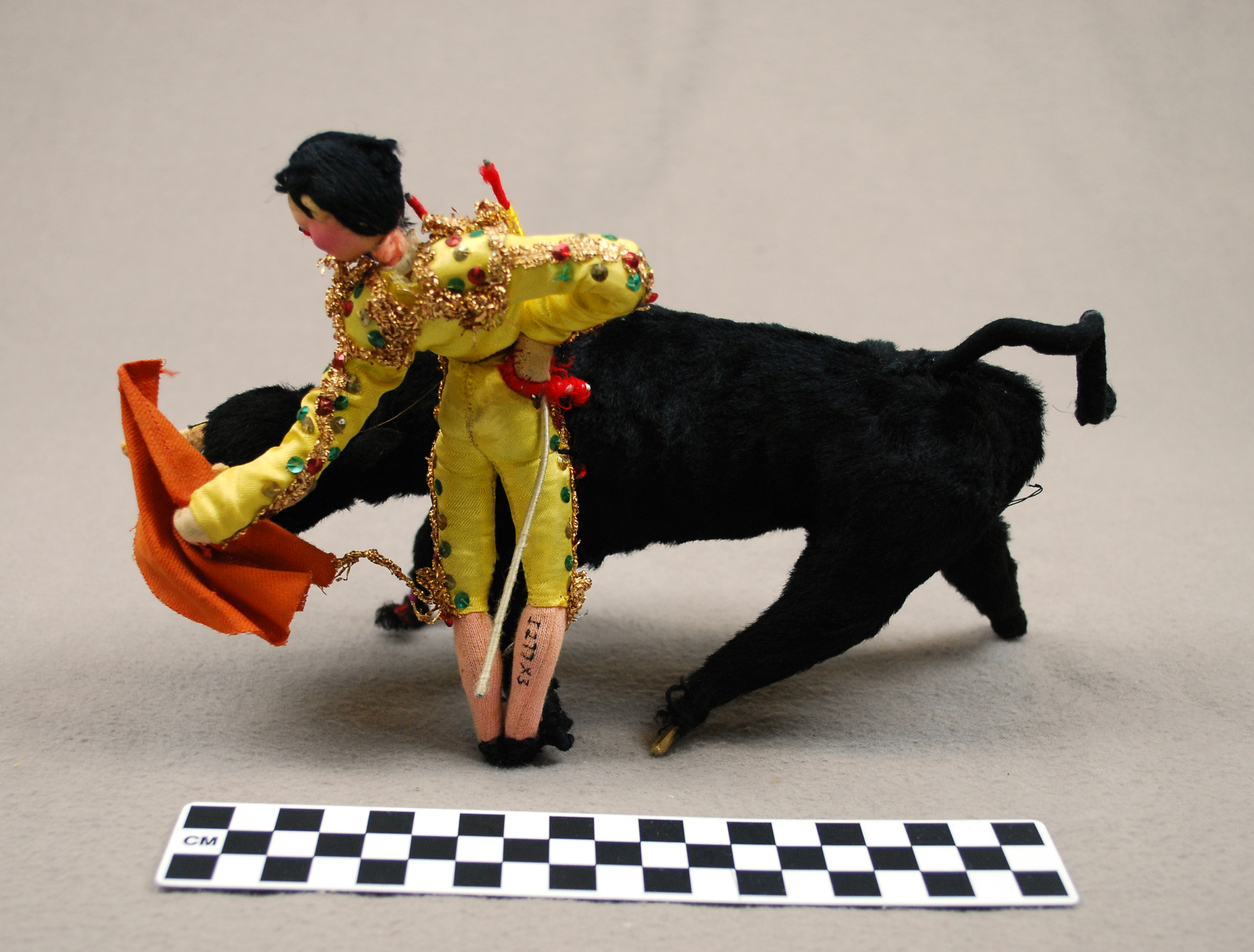 This doll shows a bullfighter, leaning out of the way of a charging bull. Originally introduced to the Americas by the Spanish, bullfighting has long been a popular sport throughout Spain, France, Portugal, Mexico and Latin America. There are many different styles of bullfighting performed in different areas of the world, not all of which include injuring the bull. However, in most traditional bullfights seen in Spain and Mexico the death of the bull is the climax of the event. In these traditional events professional bullfighters, called matadores or toreros, perform a variety of death-defying moves to encourage the bull to charge at them. Depending on where the fight is taking place, and the stage of the fight, there could be a number of fighters in the ring with the bull. The fighters use a number of items in the fight. The doll above demonstrates how two of these items were used. In this example, the fighter is using a piece of red cloth, called a muleta or capote, to encourage the bull to charge. As the bull charges past the fighter, he attempts to a jab colorful lance, or pica, into the bull’s neck. The metal tips of the lances are sharpened to form small hooks that catch in the bull’s flesh and remain sticking out of his neck throughout the fight. The repeated charges, small injuries from the picas, and the resulting blood loss, slowly exhaust the bull. At the end of the fight, the fighter’s goal is to kill the bull with a single, perfectly placed, sword between his shoulder blades and into his heart.

Bullfights are often the main attraction at larger events including a number of other shows and activities. Thousands of bullfighting events occur annually around the world. Despite their popularity, bullfighting is now seen by many to be cruel and inhumane. Bullfighting is now banned from National Spanish Television, a number of areas in Europe, and there are a number of movements working to expand these bans worldwide.

While bullfighting is illegal in the United States, there are other sporting events that use bulls such as the charreada, which is an event similar to today’s modern rodeo. The charreada developed when area ranch hands would compete to see who was better at various animal husbandry skills. The charreada incorporates equestrian (horse) competitions and demonstrations, special costumes for the horse and riders, music, and food. Several competitions take place during the charreada, including a bull riding event called, Jineteo de Toro. The bulls used for the Jineteo de Toro are smaller than those used by Professional Bull Riders, Inc. Jineteo de Toro bulls typically weigh from 900lbs to 1300lbs, where bulls used in American rodeo-style bull riding can weigh up to 2200lbs. Another difference between these two types of bull riding is the length of time the rider has to stay on the bull. In PBR events, the rider is trying to stay on for 8 seconds, in Jineteo de Toro the rider tries to stay on until the bull stops bucking.  The charreada is still popular in Mexico and parts of the United States.

Both the charreada and bullfighting have taken place here in Texas. Bullfighting was legal in Texas up until 1891, when there was a push to move away from blood sports. Jineteo de Toro was, and is still, an active event here in Texas, but with the introduction of Wild West Shows, American cowboys started riding larger steers instead of the smaller bulls. Steers were used because they were easier to move from place to place. Steer riding was not a popular event until the 1920’s when bull riding came back into fashion. In 1936 Cowboy’s Turtle Association was founded, and began setting rules and regulations regarding bull riding. With the Association and the regulations, bull riding became much more popular on the rodeo circuit. In 1945 they changed their name to the Rodeo Cowboy’s Association, and became the Professional Rodeo Cowboy’s Association (PRCA) in 1975. In 1992 several professional bull riders broke away from the PRCA and founded Professional Bull Riders, Inc. which is the only professional organization for American-style bull riding. Bull riding has been a part of rodeo since its beginning and is considered the most popular event in rodeo.