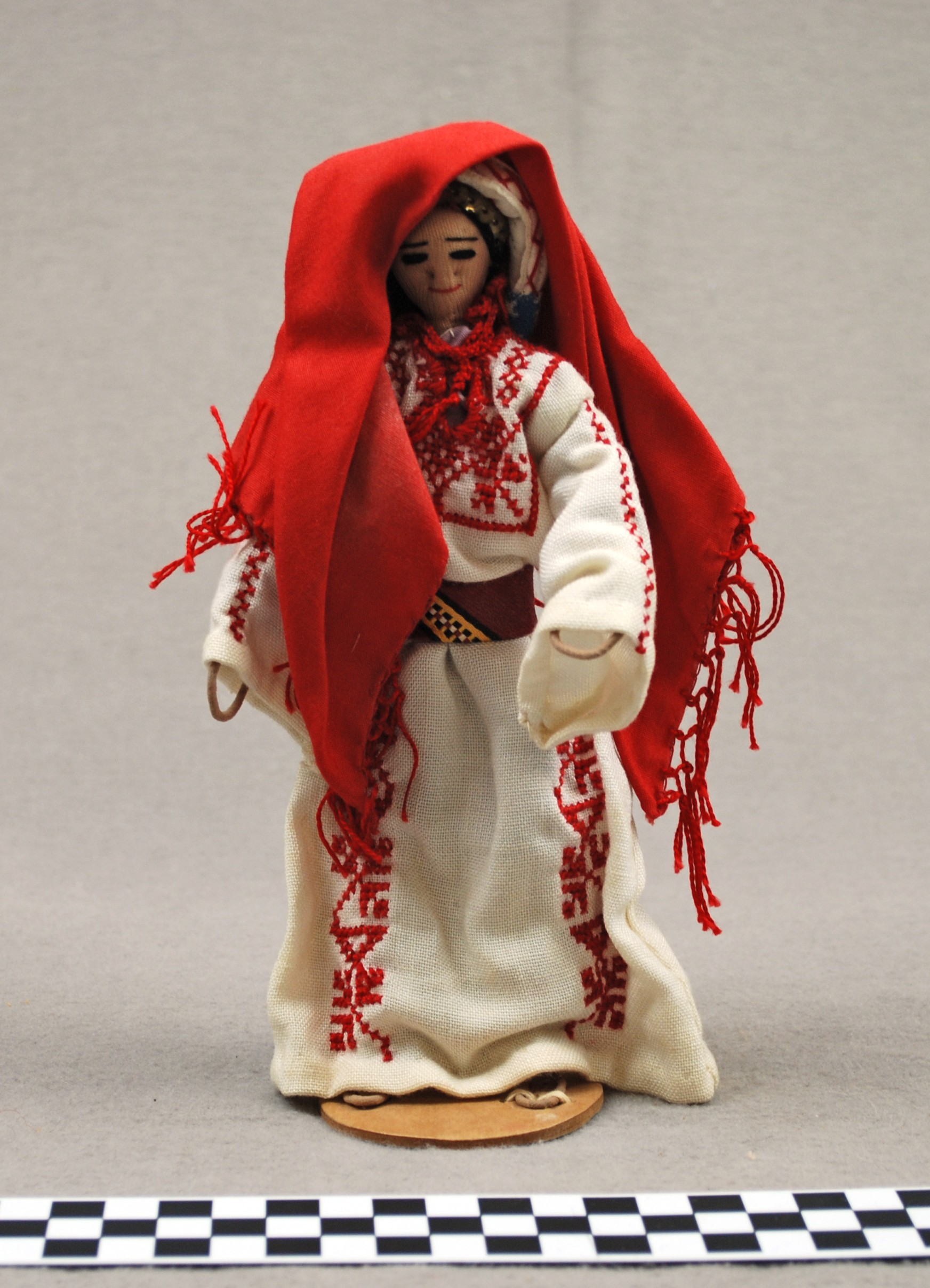 This object is one of several dolls in the permanent collection at the UTSA Institute of Texan Cultures that were produced in the 1960s as part of a YWCA project based out of various Palestinian refugee camps. This program, which is ongoing, hopes to raise awareness of refugee rights and help female refugees support themselves and their families while living in the camps. Refugee camps are meant to provide temporary shelter for people who have had to leave their homes due to war, or violence. However, as these conflicts often take years or decades to resolve, many refugees are forced to spend large portions of their lives living in these temporary shelters.

This particular doll is labeled as having come from the Aqbat Jaber refugee camp near Jericho, Jordan. This refugee camp was established in 1948 as a result of the Arab-Israeli War of 1948. This war, like many in the region, had deep historical roots. In 1516, as a result of the Ottoman–Mamluk War, the Ottoman Empire gained control over Egypt, the Arabian Peninsula, and the Levant. The Ottomans continued to control this region until the end of the first World War. The Ottoman Empire had sided with Germany during WWI and was divided into several separate nations after its surrender to the Allies. As part of this separation, the League of Nations granted France and Great Britain mandates over Syria, Lebanon, Mesopotamia (now Iraq), and Palestine (now Jordan & Israel). These mandates were created in order to help transition these areas from Ottoman rule into self government. Soon after receiving their mandate, the British government announced that they would further divide the area of Palestine into two separate states, called Palestine and Transjordan. The new Palestine was to be designated as a national home for the Jewish people, and Transjordan would become an semi-autonomous Arab state. After this decision was announced, Jewish immigrants from around the world began settling in the region. However, this territory was also home to an existing Arab population, which was uncomfortable with the increasing Jewish presence in the area. The two groups became increasingly at odds, leading to a number of protests and outbreaks of violence. After WWII the British announced they would be terminating their mandate of the area. The United Nations then drafted a new partition of Palestine, dividing the area into a new Jewish state (which would become Israel), an Arab controlled state, and an internationally controlled city of Jerusalem. However, as the mandate expired these new borders were still being contested in an ongoing civil war between the Jewish and Arab inhabitants of mandated Palestine. Immediately following the expiration of the mandate, the new Jewish state of Israel was attacked by Egypt, Lebanon, Syria, Transjordan, and Iraq. By the end of the 1948 Arab-Israeli War, Israel had managed to extend its borders beyond those originally proposed by the United Nations. However, this would not be the end of fighting in the area. This conflict over territory and religion has continued to erupt into violence during the Suez Crisis (1956), the Six-Day War (1967), the Yom Kippur War (1973), and others to this day. While many of the original refugees from 1948 have been able to leave the camps for their homes or new settlements away from the violence, these conflicts continue to force refugees to occupy camps like Aqbat Jaber decades after the fighting began.

Dolls like the one above provide excellent examples of traditional Palestinian dress and embroidery styles. Prior to 1948 Palestinian clothing styles were regional, with each area wearing a distinctive style of dress. This doll is wearing a garment that features the traditional Palestinian embroidered chest panel, called a qabbeh, girdle and veil. A handwritten inscription on the bottom of the stand, indicates that this doll may have been made to represent a woman from Ramallah. Traditionally, Palestinian women from the Ramalla area wore garments made of black, indigo or white linen (like the one on this doll) that were decorated with geometric and floral embroidered designs.

— By Kathryn S. McCloud.
Additional Resources
Back To Collection Blog
Join Our Newsletter!
Get the latest news & updates about ITC.
Sign-Up Today!