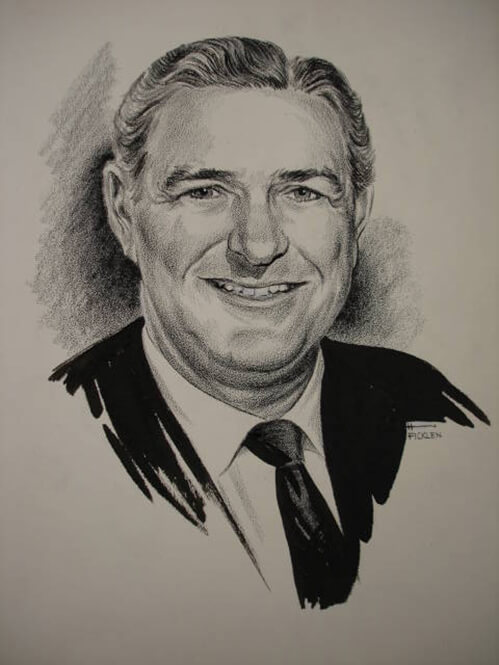 This object is a drawing done by Jack “Herc” Ficklen of the 38th Governor of Texas, John Connally. Connolly served as governor of the state of Texas from January 15, 1963-January 21, 1969. Connally was born on a farm near Floresville, Texas on February 17, 1917. He attended Harlendale High School in San Antonio, but graduated from Floresville High School. Graduating from the University of Texas and then the University of Texas School of Law. It was at the University of Texas where he met his future wife Idanell (Nellie) Brill. When he passed the state bar exam, he began working as a legislative assistant to Representative Lyndon B. Johnson. It was during this time that the two formed a friendship that would last for many years.

During WWII John Connally joined the United States Naval Reserve and served as a fighter director aboard a aircraft carriers. Connally was at 9 major air-sea battles in the Pacific. He survived 52 hours of consecutive kamikaze attacks in 1945. During his time in the military Connally rose up in the ranks all the way to the lieutenant commander. Upon returning home he worked in a number of different positions, including operating a radio station in Austin, Texas. He also served as Sid W. Richardson’s legal counsel. He was most notably known for managing five of LBJ’s political campaigns. He ran for governor in 1962 and won. He would remain governor until 1969. During his term as a governor, Connally signed a number of laws dealing with higher education. He also backed the entry of women into Texas A&M University that was previously an all male school. Connally also promoted the World’s Fair in San Antonio called Hemisfair ’68.

On November 22, 1963 Governor Connally was on the Texas tour with President John F. Kennedy. While on the motorcade through Dallas, Texas, shots rang out, fatally injuring President Kennedy and also hitting Governor Connally in his chest, neck, and wrist. At first in the chaos of what was happening, rumors spread that the governor had also passed away. His wife Nellie wrote notes about that fateful day stating how it affected them saying, “It was all I thought about, all I talked about. What if? Why? Why?” Governor Connally recovered slowly but surely, and even though he had a few doubts about what was found in the Warren Commission he agreed with most of it. John Connally would go on to become Secretary for the Treasury and even run for President of the United States. He passed away in 1993.