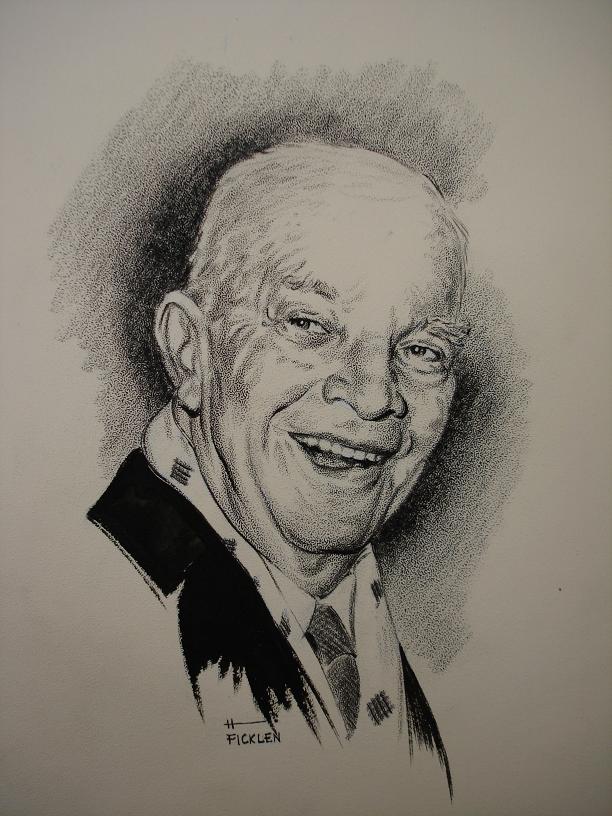 Known as one of the greatest commanders in U.S. history, this object is a drawing of Dwight D. Eisenhower also known as “Ike.” Eisenhower was born in Denison, Texas in 1890 and would go on to be the 34th president of the United States. He is also the last president to be born in the 19th century. Dwight Eisenhower was the son of David Jacob Eisenhower and Ida Elizabeth (Stover) Eisenhower. The family moved to Abilene, Kansas in 1892 and Dwight considered this his hometown. He attended Abilene High School and graduated in 1909, but was not able to attend college due to financial reasons. Ike’s brother also wanted to attend college so the brothers made a deal that one would work while the other attended college. After his first year Ike’s brother wanted a second year so, at the urging of a friend, Ike applied to the naval academy because no tuition was required. Ike requested consideration for West Point or Annapolis from his U.S. Senator and although he won the entrance exam competition, he was too old for Annapolis. Eisenhower accepted an appointment to the U.S. Military Academy of West Point in 1911, and graduated in 1915. Following graduation Eisenhower was stationed in San Antonio, Texas where he met his wife Mamie Geneva Doud.

During World War I Ike served with infantry in both Texas and Georgia. He was denied an overseas assignment and was instead placed with a new tank corps and was promoted to Lieutenant Colonel. During this time Ike showed exceptional organizational skill and was later awarded the Distinguished Service Medal. However, he was disappointed because he did not see combat. He would however, have a big role to play oversea during World War II. Following WWI Eisenhower served as an aide to Douglas MacArthur and was stationed in the Philippines until 1939, right before the Nazi invasion of Poland. After the attack of Pearl Harbor, Eisenhower was called to D.C. to be a planning officer. He would command the Allied Forces landing in North Africa known as Operation Torch. He was also Supreme Commander on D-Day of the troops invading France, this was known as Operation Overload.

After the war Eisenhower became the President of Columbia University in New York City. However, he was then commissioned by President Truman to take command of the North Atlantic Treaty Organization in Europe also known as NATO. In 1952 he was persuaded to run for President of the United States with the support of President Truman. He resigned his command at NATO and ran as a Republican, using the campaign slogan “I like Ike.”

Eisenhower won the Presidency by a landslide becoming the 34th President of the United States. In November of 1956 he would be elected for his second term. Throughout his Presidency Eisenhower had to face issues dealing with ending the Korean War, containing Communism, and try to strengthen relations with the Soviet Union, as well as the civil rights issues present in United States. As President he was able to ensure a secure economy and kept many New Deal and Fair Deal programs. Perhaps his most enduring project was the creation of the Interstate Highway System, which was responsible for 41,000 miles of roads across the country. After the launch of Sputnik, Eisenhower launched a campaign to support space exploration, science and higher education. This would result in the creation of NASA.

Eisenhower left the White House in 1961 and although he received criticism from both sides he had favorable approval ratings overall. He retired to his home in Gettysburg, Pennsylvania with his wife. After a long illness Dwight D. Eisenhower passed away on March 28, 1969. Today he is remembered for his role in WWII, ending the Korean War, and the creation of the Interstate Highway system. Throughout the United States multiple memorials can be seen dedicated in his name, and his farmhouse can still be visited.