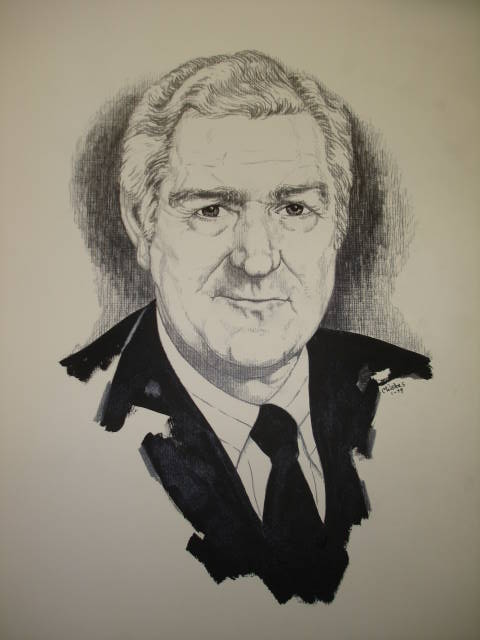 This pen and ink portrait by artist Michael Waters, from 1979, is of politician John Connally. He was Texas’s governor from 1963-1969, served as Secretary of the Navy under President John F. Kennedy, and Secretary of the Treasury for President Richard Nixon.

Connally was born in 1917 in the small Texas town of Floresville and was one of eight children. He started attending the University of Texas in 1933 and obtained his law degree in 1941 before beginning as a legal assistant to House Representative (and later President) Lyndon B. Johnson in 1939. This began to lay the foundation for his lengthy career in politics.

In 1941, World War II interrupted Connally’s political endeavors and he joined US Naval Reserve to serve as a fighter director aboard aircraft carriers. He was involved in a total of nine major air-sea battles in the Pacific Ocean and earned the rank of lieutenant commander before coming home. Upon his return,  Lyndon B. Johnson (also known as LBJ) convinced him to return to Washington and become his campaign manager. Connally assisted with all of LBJ’s races from election into the House of Representatives, the Senate (and its controversy surrounding 200 mysterious, last minute votes), and finally helped him into the Oval Office in 1964.

Connally revisited his naval background by accepting the position of Secretary of the Navy under President John F. Kennedy in 1961, but this didn’t last for long. Not even one year into his post did he resign, travel back to his native Lonestar state, and assume the title of governor. The next year, 1963, Connally was riding in the ill-fated car with John F. Kennedy when he suffered the blow of several bullets into his body. Undeterred, Connally went on to be reelected twice as Texas governor. He saw himself as someone who “personified the Texas establishment as the Texas establishment wanted to see itself.” His administration focused strongly on education, for Connally believed that the only way to truly improve social issues in society was to educate the young. He raised taxes in order to increase teacher salaries, fund school programs, increase educational resources, improve libraries, expand research, and facilitate new doctoral programs.

His next big break was under President Richard Nixon, who appointed him as Secretary of the Treasury. He tackled trade deficit and inflation problems by currency devaluation and price freezes. His success did not last, for it was not long after that Nixon became caught up in the famous Watergate scandal. Angry uproar in the legislature over John Connally filling Nixon’s vacancy ultimately resulted in the former president choosing Gerald Ford. For the next several years, Connally suffered several political blunders, including allegedly accepting bribes, criticism of being a political “chameleon” for attempting to run for the GOP nomination, and gave speeches that were interpreted by some to have anti-Semitic undertones. He gave up running for office and instead began investing heavily in real estate, becoming a partner in the Barnes-Connally Partnership investment firm. In 1983 the collapse of the price of oil and a general economic recession were contributing factors to Connally declaring bankruptcy. Connally died in Methodist Hospital of Houston in 1993 and was buried in the State Cemetery in Austin.