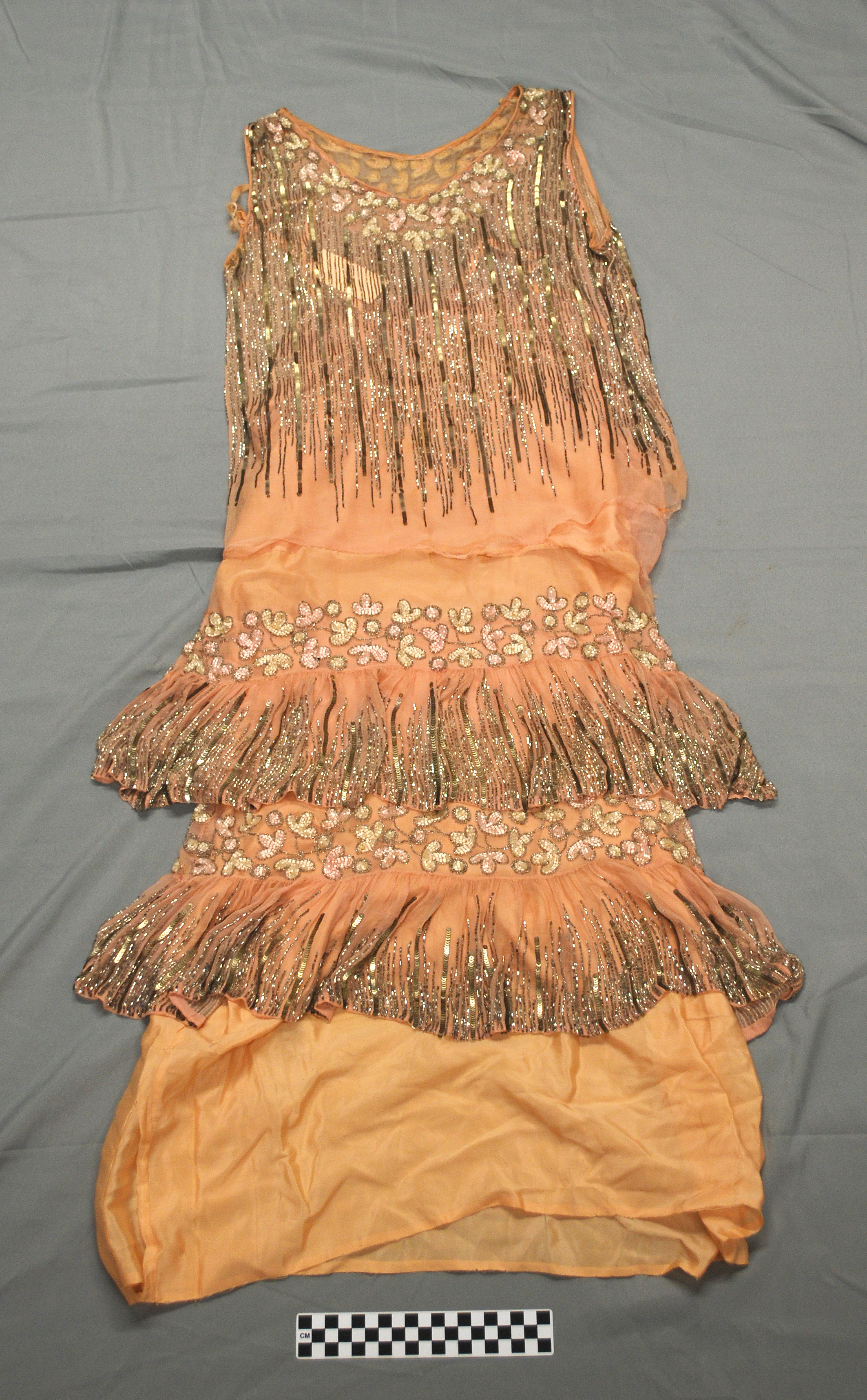 It’s a dress, but what kind of dress is it?

This item is a pink, two-tiered dress that looks to be a party dress resembling a popular fashion trend in the Roaring Twenties known in America as the ‘Flapper’ girl.

What were the Roaring Twenties?

The Roaring Twenties was a historical period in America between 1920 and 1929 that saw a number of changes in the country both socially and economically. On an economic level, America was booming— the economy more than doubled after World War I (then known as the Great War) due to a number of factors, with the most cited being that America’s infrastructure and resources were not damaged by the war. It was also the first time in the history of the United States in which more people lived in urban areas than rural areas, and a large proportion of Americans found themselves as part of a consumer economy that allowed them to purchase wanted items rather than just necessities.

Socially, the Roaring Twenties in the United States brought waves of change to the way people interacted with each other and their environment. Alcohol became illegal during a time period known as Prohibition. A new form of music known as Jazz became wildly popular and American literature found prominence with authors Ernest Hemingway, Sinclair Lewis, and F. Scot Fitzgerald. With the advancement of technology, new entertainment such as short films and radio were more accessible to everyday people and helped to create popular culture. In 1920 American women gained the right to vote—and with it, a new perception of what it meant to be a woman in the U.S.

The term ‘flapper‘ is originally thought to come from the motion that young birds make while learning to fly for the first time, and it was used in England prior to the 1920’s to describe someone or something as young, vibrant, and looking to make their own place in the world. In the United States, it was used to describe a new generation of young women who decided to stretch perceptions of what a woman could and should do. The term ‘flapper girl’ was coined in the 1920’s to describe young women who were urban, independent, working women who challenged the societal norms of the previous decades. Whereas the first ten years for the 20th century had seen women cast in a domestic light, the decade known as the Roaring Twenties allowed women to venture out of the home and establish themselves on their own terms.

Flapper girls were the epitome of independence at a time when women were still expected to get married and have a family as their sole priority― and the Flapper girls flaunted this new-found freedom from societal norms in various ways.

How were Flapper Girls different from other women at the time?

Flappers showing off their dance moves! Image via pixgood.com

Their signature style set them apart on a physical and social level. They generally sported short, bobbed hair as a symbol of their resistance against traditional beauty standards for women at the time. Flapper girls tended to show “unladylike” behavior by drinking, smoking, and being comfortable with their sexuality. Flapper girls also aimed to have fun and go out, and their clothing style reflected that desire. They tended to wear shorter skirts, higher heels, more make-up and a style of dress that allowed them to bare their arms in a fashionable way and dance freely in a number of popular, energetic styles. This was known as the Flapper Style― and became immensely popular as female celebrities such as Clara Bow, Alice Joyce and Louise Brooks sported the look.

If the Flapper Style was an American phenomenon, how did the style get to France?

While the emergence of the Flapper girl was indeed an American nod toward female empowerment, the clothing styles actually first appeared in France during the 1910’s! French designers such as Coco Chanel, Jeanne Lanvin, Madeleine Vionnet and Jean Patou focused on designs that emphasized new life, clean lines, and a “modern woman” that sought to work hard and play harder. After World War I these French designers sought to recapture youth and vitality in the wake of the conflict, and these styles that emphasized mobility and youthful expression of independence became very popular with their American counterparts.