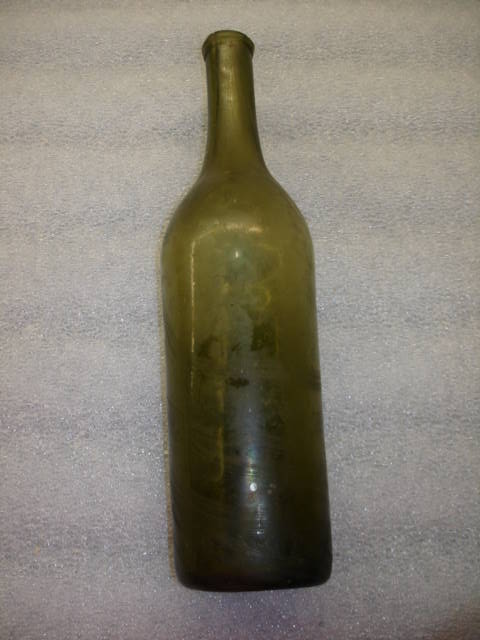 This item is a drinking bottle that most likely held wine. This particular bottle is thought to date between the 1740s to the 1840s. By looking at the bottle’s lip and base we can estimate a date range. The lip is the tip of the bottle where you drink from while the base is the very bottom. Glass making is a form of art which has been practiced for thousands of years. It is hard to determine who first used glass or who discovered it, however, it was most likely by accident. Glass is formed when a combination of sand and soda ash (a chemical with sodium) is heated until it turns into a liquid. Soda ash is a natural chemical combination found in mineral water near lakes and springs. When the mix of sand and soda ash cools it solidifies into what we know as glass. The earliest traces of glass can be found in Asia, where scientists believe it was first made. Glass was created and used throughout the ancient world by many different cultures.

The first glassware made in the United States was made in Jamestown, Virginia. The settlers used a technique called glass blowing. They used glass for everyday items like bottles, cups, and windows, but also made small beads to trade with Native Americans. It wasn’t until the 19th century the glass industry began to thrive in the United States. After the Industrial Revolution, new factories, new advanced tools, and skilled workers helped to expand the glass industry.

The first glass factory in Texas was built at Three Rivers in 1922 as sand and the gas needed as fuel to melt it were plentiful. Powered by local natural gas, the plant used quartzose sand, mined in the area to make glass bottles for milk and other beverages, as well as jars for food and cosmetics. The company attained an annual gross sales of a million dollars. The Great Depression forced the sale of the factory to the Ball Glass Company in 1937, and the factory was permanently closed in 1938. Today there are several glass manufacturers/fabricators, glass blowers, and installers that operate in Texas.