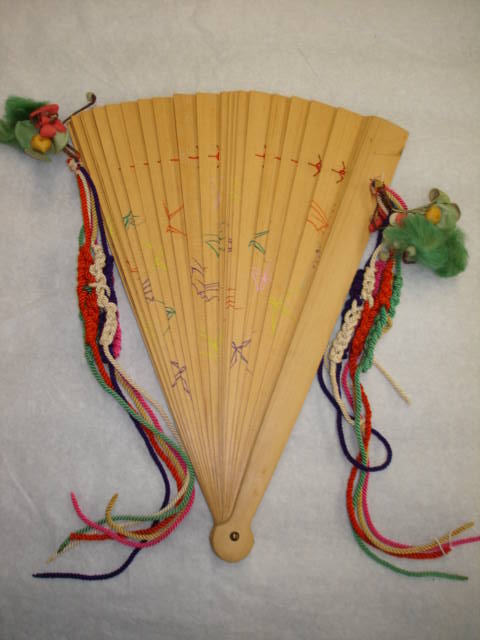 This item is a Japanese fan, more specifically a Suyehiro. It is believed that the round fan was first introduced to Japan, from China during the Han Dynasty. However, the folding fan, or Ōgi, is believed to be original to Japan and was first documented sometime in the 10th century. It is thought that the quasi-historical Japanese Empress Jingū carried one with her during her battles with Korea. These folding fans were first used by court-ladies and were more for hiding their faces than for keeping cool.

However, in Japan the fan was soon adapted for use by warriors in battle. These war fans had metal ribs and some had a red sun painted on them. Soldiers who went to the front line would take them out and wave them at their enemies in a show of challenge.

Eventually the fan made it to the common people in Japan and were used for a large variety of activities. For example, other than just keeping cool, dancers would use mai-ogi type fan in order to be more expressive in their dance.

The wedding fan that is picture above is called a Suyehiro, which translates to “future prosperity”. It is believed that carrying a fan like this brings good luck, which is why it is often used at weddings. For a traditional wedding, a fan is generally worn slightly opened; hanging from the bride’s kimono sash. When a man and woman are first engaged in Japan it is traditional for them to exchange gifts and a fan is a popular gift choice. The fan in this context represents happiness between the couple.  An actor or performer who is on a formal call might also wear it as a sign of etiquette.