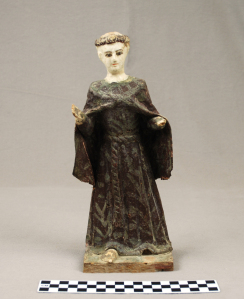 This object is a wooden statue of Saint Anthony, or possibly Saint Francis. Spanish statues like this were called bultos or santos and they were depictions of saints or other religious figures in Catholicism. This work of art was probably made in southern Texas or northern Mexico. A figurine like this would have been used in a home shrine, rather than in a church. Santos have a long history dating back to the Spanish Colonial period, after the Spanish had explored and conquered the New World.

Example of a santos. Photo by Marina Hayman Ph.D., via colonialmexicoinsideandout.blogspot.com

Originally, santos were made by the missionaries living in the New World. These religious men would use them as props to help teach Native Americans about Christianity, and were often given to the converts to display in their homes. However, not all santos were placed in the home, many of them were treasured items and churches proudly displayed them during religious celebrations.

This santo is depicting either Saint Anthony or Saint Francis. Saint Anthony is the patron saint of finding lost things or people. He was a part of the Franciscan order and was known for his gifted preaching which had the ability to reach people of various backgrounds. This gift was celebrated so much that he was given the title of Doctor of the Church by Pope Pius XII in 1946. He is usually depicted holding a book, or with Jesus as a baby.

Saint Francis is the patron saint of merchants, ecologists, and animals. He was known for abandoning his family wealth to live a simpler life of poverty. He is one of the most respected religious figures in history. The Franciscan order was also founded by him and the members of the church would later become widespread in the New World in their attempt to convert native populations. He is usually depicted with animals such as birds.

Santos are carved out of wood and then painted into the likeness of whichever saint they were supposed to represent. Today, people called santeros make the santos and other religious images. Like all art, the materials they are made from and their style reveal where they come from. Many santos are attributed to New Mexico where the tradition of making and keeping santos is still practiced. However, not many examples of early colonial santos survived to today.