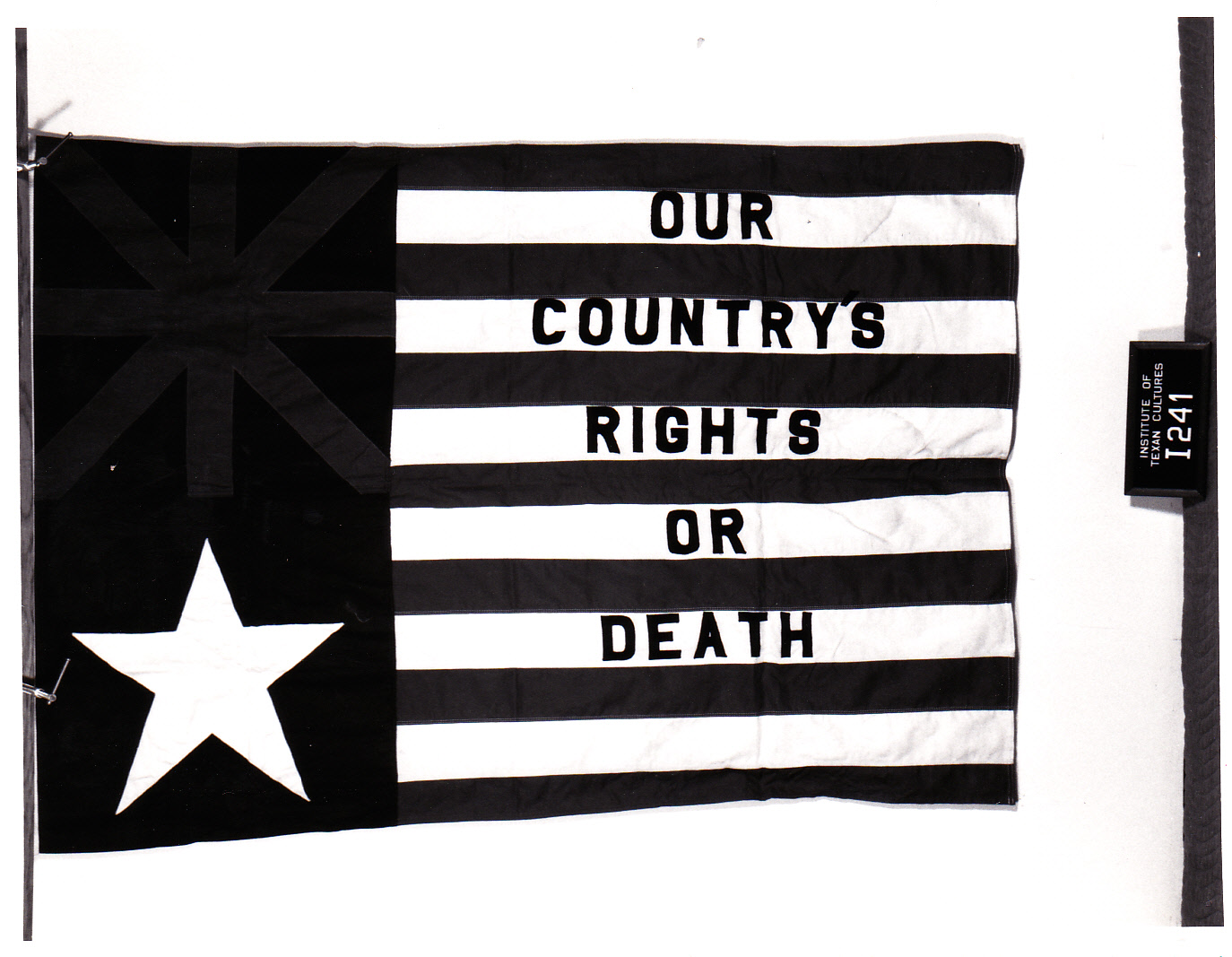 This item is a modern reproduction of the San Felipe flag which was carried in the Texas Revolution during Sam Houston’s retreat from Gonzales to San Jacinto. The front of the flag has thirteen stripes representing the stripes on the American flag. The star to the right of the stripes symbolizes Texas and its “spark of liberty.” The flag was carried by Captain Mosely Baker from the town of San Felipe to Gonzales in February 1836 where he and his men met with Sam Houston. From there they marched to San Jacinto where the flag led them into victory, and the end of the war.

The Texas Revolution began on October 1835 with the battle of Gonzales and ended with the battle of San Jacinto on April 21, 1836. The Texans gathered up nearly 10,000 soldiers to help fight for independence. Most of these soldiers had little or no military training. The battle of Gonzales was the official start of the war and is said to be “where the first shot of the Texas Revolution was fired.” Before the battle of San Jacinto began, San Antonio de Valero Mission in San Antonio, now commonly referred to as The Alamo, and town of Goliad had been brutally attacked by the Mexican dictator and president, Antonio Lopez de Santa Anna (also known as Santa Anna) and his armies. These attacks led to the fall of the Alamo and left many Texan soldiers dead or wounded.

The conflict at the Alamo started when Santa Anna and his troops arrived in San Antonio on February 23, 1836. At the time, only a couple hundred Texan forces defended the city. Santa Anna was able to easily push the Texans into the old mission called “the Alamo.” Less than 200 hundred men defended the mission against Santa Anna. The siege of the Alamo lasted nearly two weeks, however several letters asking for back up were sent out. The most famous letter written by Commander William Barret Travis was sent the night of February 25th. This is known as the “Victory or Death” letter.

In this letter Travis pleaded for help and stated that Santa Anna demanded surrender. Travis then said “I shall never surrender or retreat… VICTORY OR DEATH.” The commander declared that he would defend the Alamo or die trying. On March 6th Mexican forces took the Alamo and killed all defenders. The bodies of the defenders were ordered to be burned while the bodies of the Mexican troops were to be buried or tossed into the river. Mexican documents counted burning only 182-183 Alamo defenders, but buried close to 600 Mexican soldiers.

The battle at Goliad is not as well-known as the battle of the Alamo however it was just as important. After learning of the defeat at the Alamo, General Sam Houston gave orders to Colonel James W. Fannin to retreat from Goliad. For unknown reasons Fannin delayed in his retreat and was surprised by Mexican General José de Urrea. There Urrea and his men dominated Texas forces at the battle of Coleto (a spot just outside of town) and imprisoned Fannin and his soldiers after they surrendered. The prisoners were sent to the fort in Goliad named “La Bahía” where Urrea wrote to Santa Anna about the surrender. Santa Anna ordered Urrea to leave no survivors, so all the prisoners were executed.

After the battles of the Alamo and Goliad both Texas and Mexican forces marched near San Jacinto River. On April 20, 1936, while Santa Anna and his army rested, Houston and his 900 men attacked. The Texans took advantage of the Mexican Army’s unpreparedness and won the battle. The battle itself lasted only lasted 18 minutes but in the end helped win the war. Houston’s men were able to capture Santa Anna the day after the battle and talk him into coming to an agreement. He agreed to order all Mexican troops to leave Texas immediately. Soon afterwards treaties were signed at the town of Velasco declaring Texas independence from Mexico.