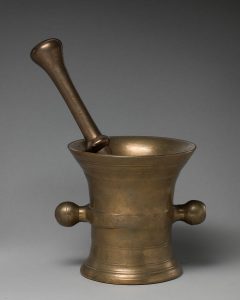 British or American 18th Century brass mortar and pestle from the Metropolitan Museum of Art.

Some foods are difficult to eat as they are naturally, so pulverizing hard foods can make them easier for humans to eat. They can also turn inedible food into delicious creations. Wheat in its natural form is not easily digested by humans and does not provide very many nutrients, but when you crush it up into a powder it becomes flour. Then, the flour can be turned into multiple types of breads that are better absorbed by the human body. The mortar and pestle also provides alternative ways to prepare one type of vegetable. You can cook corn on the cob and eat it as is, or you can grind it into a powder which can be used to make masa for tortillas, tamales and more. A few examples of foods that the Kickapoo tribe used the mortar and pestle with are: the fruit of the Hackberry tree which was crushed then eaten; the Hog-plum was crushed then steeped in water for a drink; beans from Honey Mesquite trees and the hearts from Texas Palm plants were dried then pounded into a powder or meal which could then be used to make other dishes. [Amanda Bell, edited by Adriana Christian]

To learn more about Native American Tribes in Texas: