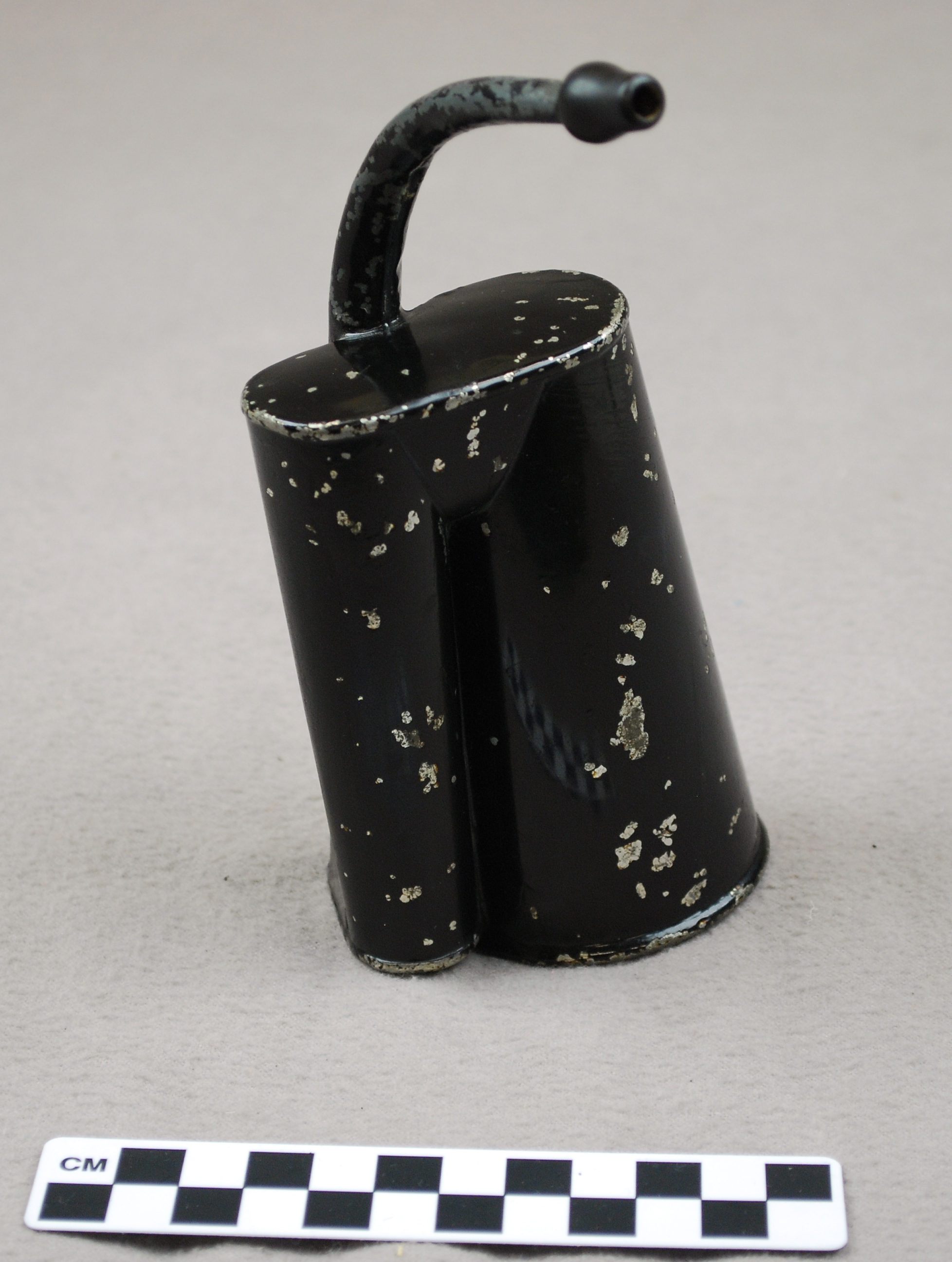 Hearing aid technologies have a long history, going nearly as far as deaf culture and community itself. Hearing technologies over time have empowered the deaf culture in the fight to be recognized as able citizens, not individuals with a disability. As one might guess much of the culture and identity of the deaf community is centered on language, but it is also focused on shared knowledge and a large support system. The deaf community is more than a group of non-hearing individuals; it is made up of people who share a history, language and struggle, which is an integral part of cultural development.

This object is very similar to the early London Dome Ear trumpet or, as it was also known, the Grand Opera Dome (1850-1880s). This device got its name because of their popularity at the opera. The dome shape of the piece made them well equipped to pick up voice frequencies. It is a simple hearing device, with a large thin metal dome attached to a smaller metal tube that would fit into the user’s ear. Struggles for the non-hearing to be seen as normal in the eyes of a hearing society were evident in many of the hearing aid technologies throughout history.

In the earliest written records we find philosophers and saints giving the first perspectives on individuals who could not hear, and they felt they were inherently inferior to those who could hear. This notion was based on the idea that the deaf could not be properly educated because they lacked language. In the deaf culture’s formative years they were cast out of religious institutions because they were thought to be under the punishment of God and without language could not learn about faith. It was not until Saint Augustine that the deaf community was recognized as having the foundations of language. He claimed that their body movements and gestures could be considered language and thus they could learn about faith and find salvation.

Saint Augustine opened the door for the individuals with a severe hearing loss to be recognized as part of society and by the 6th century we saw physicians in Europe trying to ‘cure’ the deaf. It wasn’t until the 16th Century that schools for the deaf were developed. Doctors realized it was not something that could be ‘cured’ because being deaf is not always related to illness. These schools would become the foundations of modern deaf culture. Thomas Hopkins Gallaudet in the 1800s traveled to Europe to learn about deaf education, after his to return to the United States he established the American School for the Deaf. His son Edward Miner Gallaudet would follow in his father’s footstep giving deaf culture their first university, Gallaudet University.

Over time we see technologies develop from the cumbersome ear trumpets of the 1700s to royal armchairs in Europe equipped with devices to amplify sound for whoever was occupying the chair. There were even end tables with vases or urns disguising amplifying technologies. Over time, with the drive to no longer be immediately recognized as non-hearing, technologies became smaller and more easily disguised. Developers tried everything, even fitting devices to glasses and shaping earpieces to fit directly into the ear canal, which leaves us with today’s most powerful and controversial hearing aid technology, the cochlear implant.

The cochlear implant is the most recent hearing aid technology developed and it has by far caused the most heated debate in the deaf community since its inception. This is an electronic device that is surgically placed under the skull flesh behind the ear. An external portion is attached and connects to the implant using a magnet. The external portion allows the individual to control the sound volume or turn the device on and off. For some this device gives them the opportunity to be a part of the hearing community, as well as the deaf community. Parents with children who are born with a severe hearing loss are encouraged to consider the implant at an early age so as the child matures they learn how to hear and speak. Often individuals who get the implant later in life find speaking to be a challenge, as they have to develop the muscles to speak as well as learning the language itself. The documentary ‘Sound and Fury’ (2000) outlines the controversy of the cochlear implant as it follow a family as they investigate the benefits and cultural consequences of this new technology. The deaf culture has overcome many struggles but must continue educating others to build an understanding of what it means to be deaf and help preserve their culture.