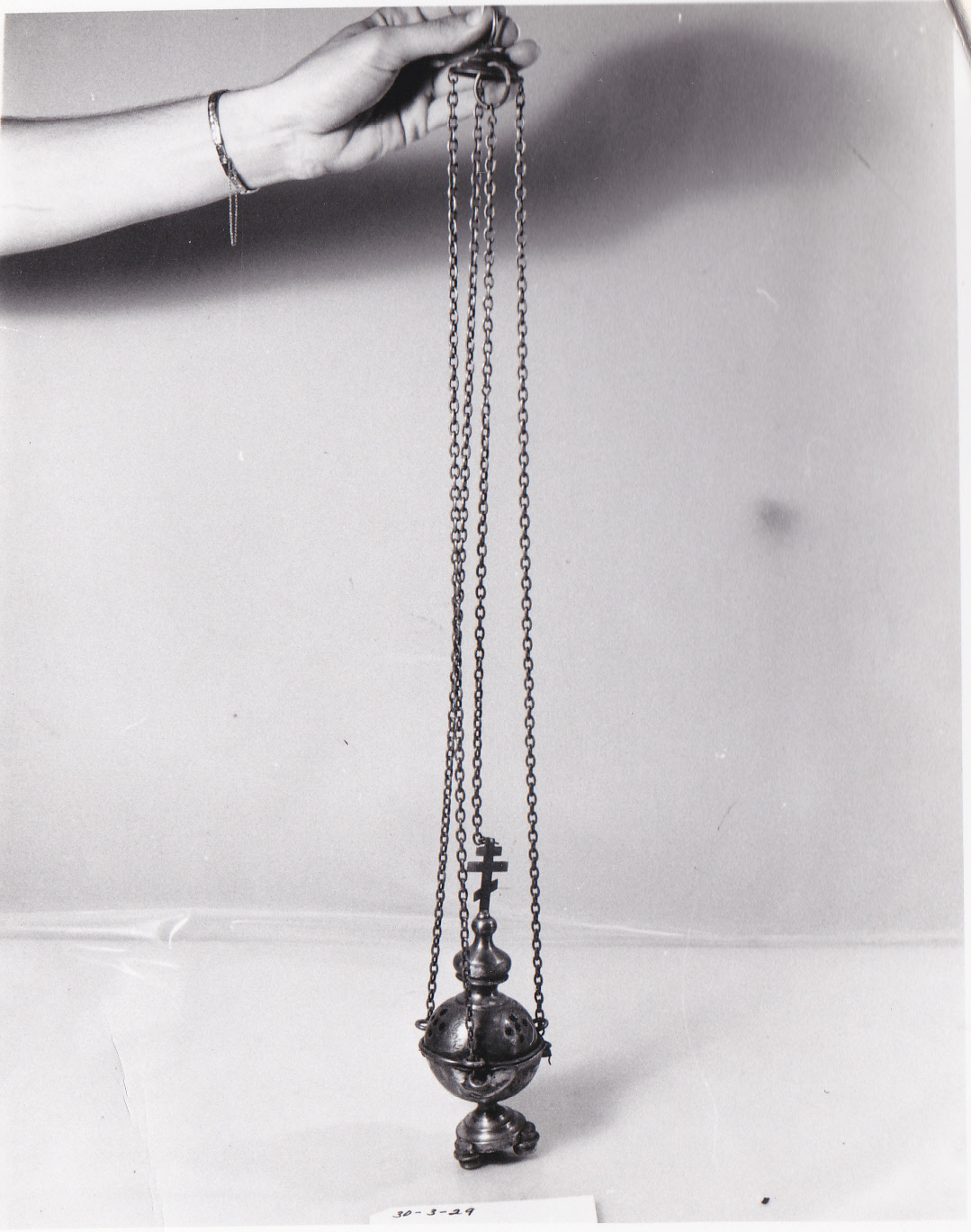 A thurible is a metal censer in which incense is burned during religious services. The thurible is suspended from chains and is gently swung by the priest or thurifer in order to spread the fragrant smoke of the incense. A thurifer is an acolyte that carries the thurible. In many religious ceremonies all five senses (sight, hearing, touch, taste & smell) must be used during worship. In Orthodox worship these senses are engaged by: looking at religious imagery throughout the church and at the altar, listening to the liturgy and songs, ingesting the Eucharist bread and wine, and smelling the incense. Additionally, the smoke from the thurible is believed to be a physical representation of the prayers of the church as they rise toward heaven. In the Christian tradition, a thurible is commonly used for Divine Liturgy, vespers and matins, although it may be used on a variety of other special occasions.

The thurible at the Institute of Texan Cultures belonged to Father Nahas of the Antiochian Patriarchate from the ancient church of Antioch. Father Nahas used this thurible to burn frankincense, a natural, aromatic resin from Boswellia trees. Frankincense was one of the gifts that were presented to Jesus by the magi at the time of his birth, making it a commonly used type of incense in many Christian churches.

Father Nickolas Nahas was ordained in 1916, shortly before immigrating to the United States with his family. At that time the Russian Orthodox Church was the dominant division of the Orthodox Church in the country. The Russian Church was one of the first to reach the United States (through Alaska) and, as the most established, was responsible for the administration of all Orthodox churches in the country. However, following the Russian Revolution in 1917, the Russian church was unable to continue its oversight of the American orthodox communities. Without this centralized leadership, Orthodox churches in the United States sought leadership from their countries of origin. This has allowed a number of different ethnic versions of Orthodox Christianity to flourish in the United States to this day. Father Nahas, coming from Lebanon, became part of the Antiochian Orthodox church in America. The Church of Antioch is one of the five ancient Patriarchates of the Christian Church. The Church was established in 42 A.D. by the Apostles Paul and Barnabas.

In 1935, Father Nahas made the decision to become a traveling priest. Father Nahas served as a priest in a number of churches, including: St. George Eastern Orthodox Church in Kearney, Nebraska; St. George Orthodox Church in Houston, Texas; St. Mary Orthodox Christian Church in Wichita, Kansas; and St. Michael Church in Beaumont, Texas. In his role as priest, Father Nahas performed some of the first marriages between Lebanese immigrants and non-Lebanese people in the United States. The Church of Antioch currently has over 250 parishes in North America, 21 of which are in Texas.