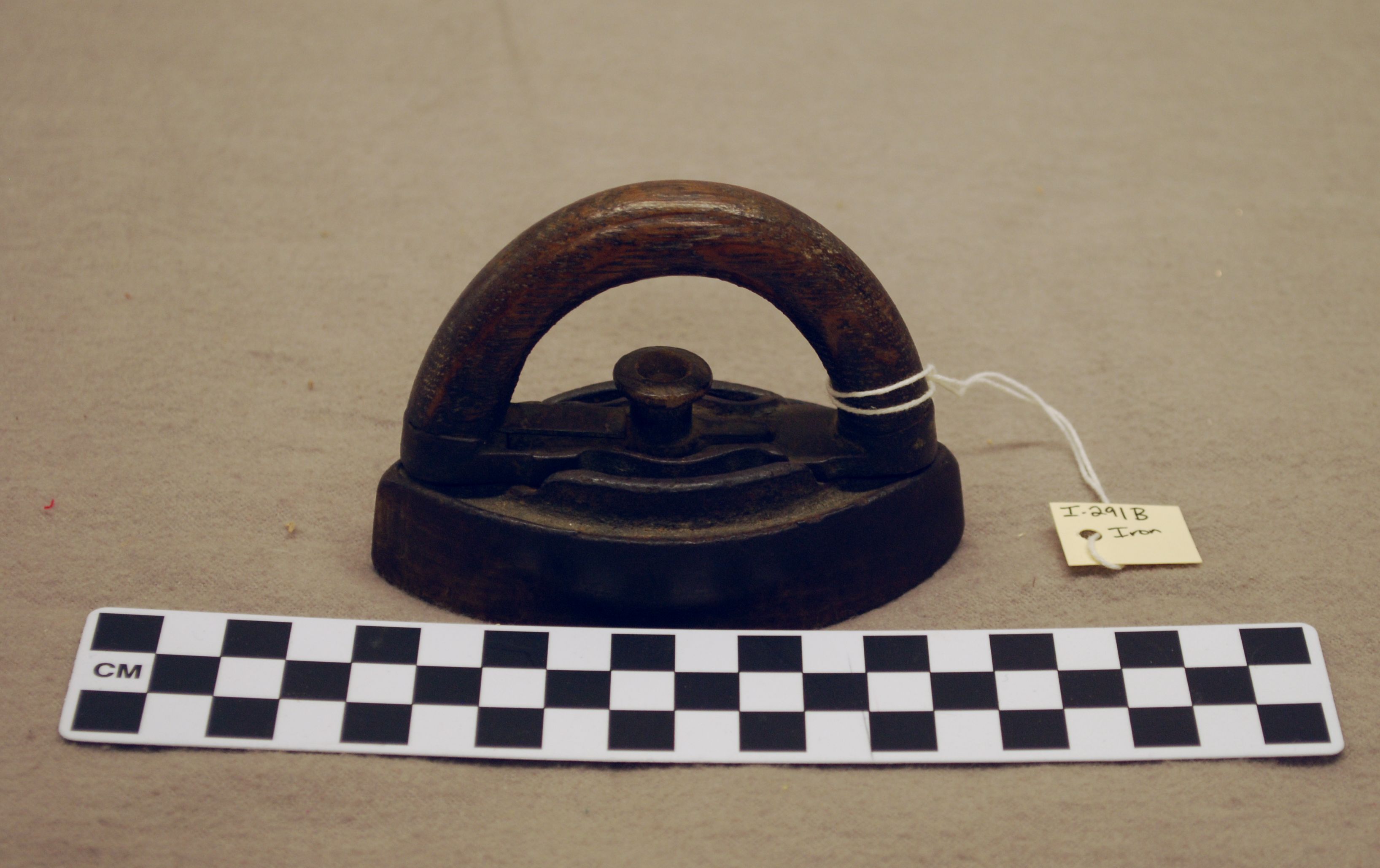 This is a small metal iron, referred to as a sadiron. It was donated by Sister Alexandrine, whose family immigrated to Texas from Silesia in the late 19th century. When her great-grandparents immigrated, her grandfather traveled to find work bricklaying and her grandmother, like many immigrant and ethnic minority women, took in laundry and ironing to support herself and her family. Hattie Elam Briscoe, who went on to become the first female African American lawyer in San Antonio, put herself through college by working as a laundress and cook for a local family.

Before European blacksmiths started making metal irons in the late medieval period, people would use stone, glass or wooden “smoothers” to press pleats or smooth fabric. More complex methods involved screw-presses and mangle boards which were very popular in Northern Europe and could be quite ornate. The early metal irons were mostly a flat piece of metal with a metal handle. The earliest irons were made to be placed directly into, or by, an open fire. Later irons were heated by being placed on a stove top to heat. The person ironing would need to be careful to use a rag or cloth to avoid getting burned by the handle of these early models.

Sadirons get their name from an older word, sald, which means solid. They were made with thicker metal and held heat longer. Though many households would have at least two so that one iron could heat while the other iron was being used. Over time, a number of clever inventors  improved the sadiron in a number of ways. In 1870 a woman, named Mrs. Mary F. Potts, patented an iron that was pointed on both ends, making it more versatile. Later, 1871 she also patented an iron with a removable wooden handle. he removable handle was an important safety feature, helping to prevent burns by keeping the handle from getting hot while the iron heated. One handle could have been used with multiple sad irons of this type, and since the handle was removable, it was not necessary for the handle to be attached to the iron while it was heating. They were sold in sets of 3 or 5, so that they could be continually rotated while ironing large numbers of items. Mrs. Potts also produced as small set of “toy” irons that were marketed to children. These smaller irons, like the one at the Institute of Texan Cultures, were fully operable irons and many women preferred these smaller irons for lace, doilies, and handkerchiefs.

Mrs.Potts traveled to a number of events to promote her invention, including the 1893 Columbia Exposition. There she demonstrated her irons in the Women’s Building, which was designed by Sophia Hayden Bennett, the first woman to graduate with a degree in architecture from MIT. This is the first time that there was an entire building dedicated for women at the World Fair.

Despite all of the innovations, ironing with sadirons could be tedious. The nature of the metal is such that it rusts, or oxidizes when in contact with water. The irons had to be sanded and polished to keep them from damaging or staining the fabric. Naturally any item being used on a daily basis such as an iron is going to be reinvented repeatedly as people discover new ways to make a tedious task less difficult. A later innovation was to make a reversible sadiron, made with the idea that if heat rises then rotating the top side to the bottom would enable the person ironing to always keep the hottest side of the iron on the clothing.

Around 1900-1910 charcoal irons, which had been used in Asia for quite some time, began to catch on in the United States. At that time door to door peddlers performed a valuable service in rural regions like much of Texas, traveling between communities, carrying news and a pack full of items that otherwise might not be available in those regions. Some peddlers carried charcoal irons, the American versions of which were very similar to sad irons, but hollow and filled with hot coals instead of heating over a fire. Some had a chimney for the smoke to vent away from the clothes.

Later slug irons replaced charcoal irons. Instead of using hot coals, a removable metal slug was heated and placed inside the iron. After slug irons, asbestos irons became extremely popular, until the electric iron became widely available. Asbestos irons were a steel case lined in asbestos, used to attach to a hot metal core. The asbestos and airspace between the hot metal core and the handle ensured that the handle for the iron would be cool, while staying hot longer. Overall, in the late 19th and early 20th centuries there were a wide variety of irons on the market.

When all irons were sad. An exhibit of the collection of John Rowley at the Feast Hall. 1969. [Ambridge, Pa.]: Old Economy.