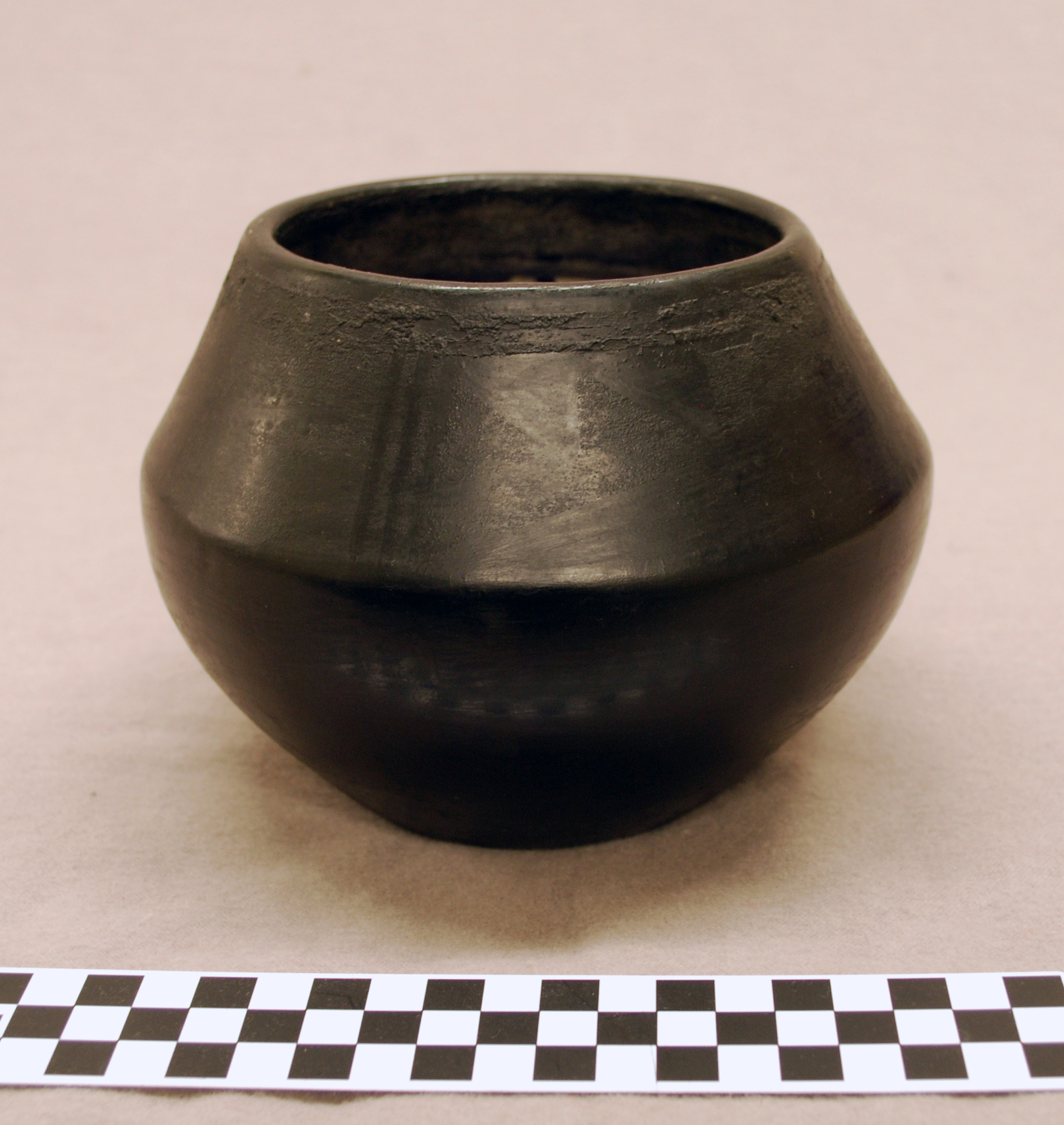 We have a pottery mystery here at the UTSA Institute of Texan Cultures. This piece of pottery was given to the museum with little historical background provided. After cataloging, photographing and inspecting its condition, a signature was found on the bottom and it appears to read: Marie + Julian. These are the names of one of the most famous producing pottery couples out of the southwest. They were masters of their craft, perfecting techniques that others today can only aspire to match. Yet, for being masters of their craft this pot is a bit underwhelming. It does not have the quality most commonly associated with Marie + Julian pottery. Thus, we must investigate further.

First we should start with what we know about the piece of pottery we have in the museum collection. In analyzing the piece we need to make note of as many details as we can, because no matter how big or small they could be a clue. Notice the color, shape and designs. Each of these characteristics can help identify where a piece of pottery came from. For example, the southwest is well known for its elaborately decorated pottery. Some pieces have distinctive designs, some are made of characteristic types of clay or finishes, others have symbolic shapes such as the wedding vase. The shape of a wedding vase is a symbol of unity, the unity between a man and a woman. It has a large round base for liquid and two spouts for the couple to drink from. This pot is 6 x 8.5 inches, black, with evidence of design work on the upper shoulder of the pot. The inside was left unfinished and there are signatures on the bottom of the pot that looks like Marie + Julian.

Maria and Julian Martinez are legendary names amongst potters, avid collectors and museums. Maria Martinez grew up in San Ildefonso Pueblo, just twenty-five miles north of Santa Fe, New Mexico. San Ildefonso has a rich history with evidence dating back to as early as 1300 A.D. The San Ildefonso people had many struggles over the years, from an uprising in 1696 to later colonial encounters that would spread illness through the pueblo, such as smallpox and pandemics like the 1918 Spanish flu. A once thriving population was diminished to only ninety by 1918. Arts and crafts became essential to the San Ildefonso economy soon after during the 1920s as they lacked the people and resources to maintain a thriving agricultural economy. The influence and attention that Maria and Julian’s pottery brought to the community helped build the reputation of an otherwise suffering San Ildefonso Pueblo.

Maria Martinez learned traditional pottery techniques of the area from her family as a young girl. Later in an effort to prefect her craft, she studied the excavated pottery from local archaeological sites. Maria alongside her husband Julian Martinez would spend their lives designing and teaching pottery to others. The two married in 1897. Maria and Julian Martinez were a perfect team. Maria focused on making the pieces of pottery themselves while Julian would paint and add detailed designs to the pieces. Julian Martinez is known for mastering the technique that creates the black on black finish you see on this object.

The inscription seems like a dead giveaway that this piece of pottery must be a work of Marie and Julian Martinez. The signature even has the ‘+’ symbol that is typical of their pieces produced between 1925 and 1943. Yet, the history of Maria Martinez signing pottery is a long one. When Maria and Julian first began producing pottery they didn’t sign their work. Even after they did start signing their works, the style of the signature would periodically change. Maria, while not officially changing her name, would sometimes sign her name “Marie.” It is said she was advised to do so because Marie was a more commonly recognized English name and Julian’s name was omitted entirely at first because pottery making was the work of women. As their work developed and gain notoriety they began to sign each piece ‘Marie + Julian’ and this would remain their signature until 1943 when Julian Martinez passed away. Marie surrounded by the support of her children would continue to make pottery with her daughter-in-law and son who took on the black on black design work of his father.

Compared to many of the pieces of pottery by Maria and Julian Martinez the craftsmanship of this piece is lacking. The black on black design is barely recognizable at first glance and has a rough, raised and bubbled look to it. This might be the result of damage, or simply a “bad batch” made of lesser quality materials or due to a problem with the firing conditions. The signature indicates that it couldn’t be one of their earlier works, when they were still learning their craft, as those pieces would have been unsigned. Of course, due to the popularity and value of Maria pottery, this piece could also be an attempted forgery. Unfortunately we don’t always get all the details when objects are donated as museum artifacts, and many authentications must be based on expert opinions. Without further research, we can only say that this piece might have been made by Maria and Julian Martinez. What do you think? Is this a Maria Martinez original?