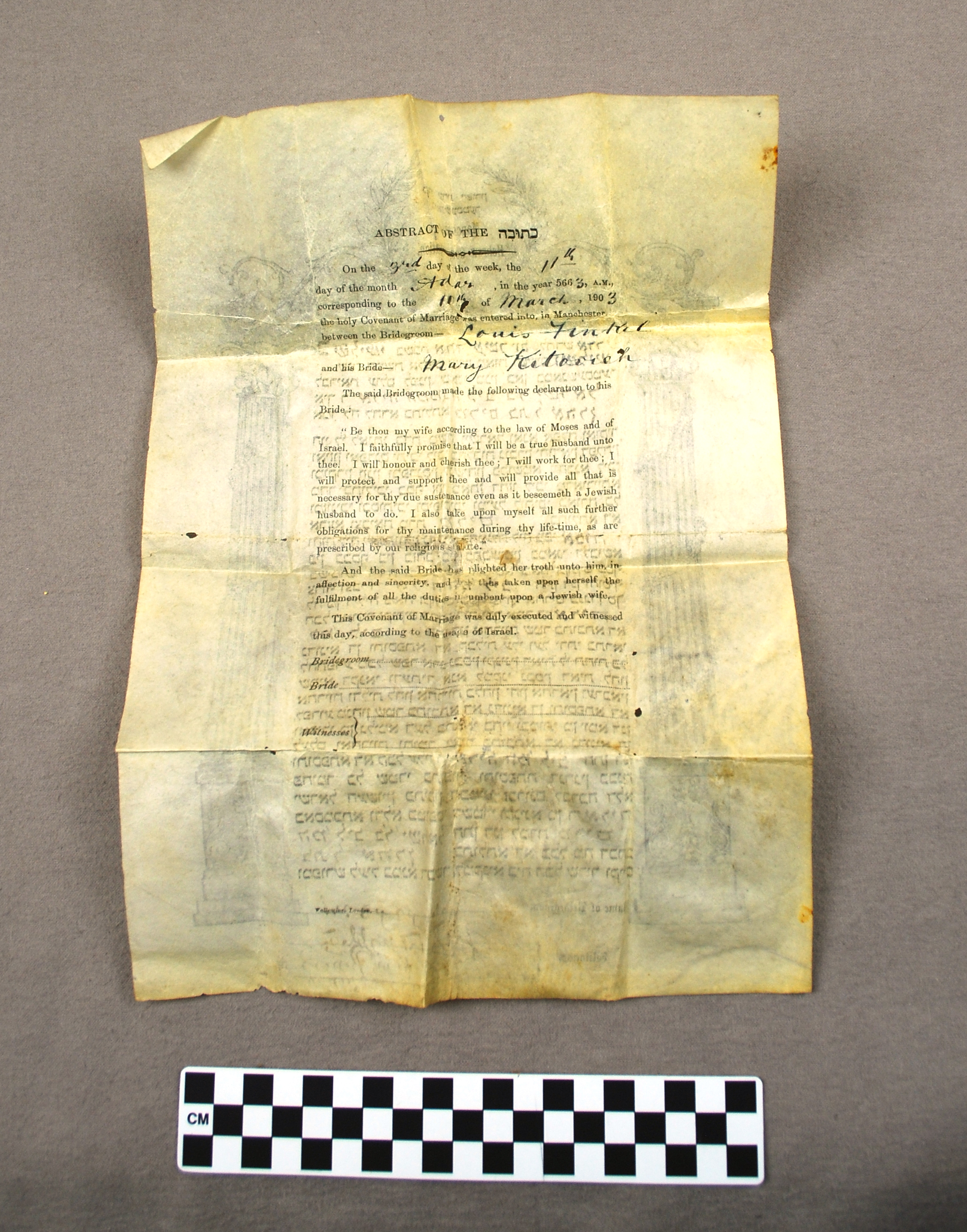 In many cultures around the world, marriage is a major life event that celebrates the legal and/or spiritual union of two people. Marriage ceremonies have been around since ancient times, but today weddings have increasingly become large themed parties with elaborate decorations, formal dresses, and a gathering of friends and family. However, if you are the one getting married, a key component of the wedding day would be having your marriage certificate signed. For people of Jewish faith, this marriage certificate or ketubah (keh-too-buh) is not just an essential part of the wedding day, but an important object throughout their marriage.

What is a ketubah?
A ketubah is a key component of a Jewish wedding ceremony, similar to a certificate of marriage used for legally documenting the union with the government. However, in Judaism the ketubah is more than that— by definition, the ketubah is a binding religious document that outlines and details the husband’s marital obligations to his wife. Usually written in Aramaic (an ancient language very closely related to Hebrew), the ketubah is read out loud by a scholar of the Torah such as a rabbi during the marriage ceremony, after the exchanging of rings. After the ketubah is read, it is handed to the groom who presents it to the bride. The ketubah is placed in a safe place and is regarded as an integral part of the couple’s married life.

What are the groom’s obligations?
The ketubah usually states what the groom must provide for his bride for the duration of their lives together: things like food, shelter, protection, and love. Some ketubahs also state the groom’s intentions of fidelity. Another key component of a ketubah is the amount of money that the wife is to receive if the couple separate or the groom passes away. In ancient times, the ketubah was a legal contract that was strictly enforced. Today, in some countries such as Israel, the ketubah is still a legally-binding contract. In places such as Europe or North America however, a ketubah is more of a symbolic document. Even though the ketubah is not always considered a legal document in modern times, for Jewish couples who observe this tradition, the ketubah is a beautifully decorated reminder of their commitment to each other.

What does a ketubah look like?
Traditional ketubah are usually written in ink on materials made of parchment paper or rolled animal hides. Today ketubah are made out of many types of materials, even stained glass!

Kehtubah also can be written in a number of languages. In ketubah that are produced today, there is often an ornate front written in Aramaic or Hebrew with a less decorative back, often in the couple’s native language. Ketubah also have spaces where the date, couple’s names and the signatures of witnesses are to be written. This particular ketubah at the UTSA Institute of Texan Cultures is very ornate, with printed floral elements and grand columns. Today, ketubah can be manufactured or created by hand—in both cases, the intricate designs and symbolism behind those designs become a work of art. Popular images include biblical scenes and images of nature, and geometric patterns. Some modern ketubah are even created with a variety of art media—photographs, watercolors, and lace!