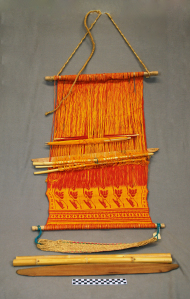 Weaving has been a valuable art practiced around the world for thousands of years, across many cultures. Although now widely replaced with mass production textile factories, the art of weaving has played a significant role in shaping the textile industry in Texas and other parts of the world today. Some of the earliest types of loom were believed to be the warp-weighted loom and horizontal ground loom. The warp-weighted loom gets its name from the small weights that were attached to the warp (vertical threads) of the weaving, to provide tension. Horizontal ground looms are extremely portable and require only a few stakes in the ground to create a simple loom, they have been particularly popular in nomadic societies since prehistory. Similar to the horizontal ground loom, back-strap looms are also very portable and have been in use in South America since at least 5800 B.C. Weaving, in its many forms has been an important part of New World culture for centuries, and looms of my types have been used by native peoples throughout the Americas. Back-strap looms like the one at the UTSA Institute of Texan Cultures, made in Fonart, Mexico are still common in Central and South America today. This type of weaving is particular popular amongst the Highland Maya, who produce impressive brocaded fabrics using these simple looms. A back-strap loom is comprised of several sticks, rope and sometimes a wide strap. The  loom is used by attaching the upper portion of the loom to something sturdy, like a tree or post, and the other end is strapped around the waist. The weaver can then adjust the tension in the fabric by moving nearer or farther from the tree or post.

Other styles and techniques are used all over the world. Frame style looms allow for complex techniques and patterns and is the preferred style of loom in many cultures. Frame looms come in a variety of different sizes and use the structure of the loom to create tension rather than the position of the weaver. In one variation of a frame style loom, called a treadle loom, the pattern of the weave is determined by harnesses operated by foot pedals. The loom holds vertical threads while the weaver interlaces the horizontal threads through in a variety of different patterns. They are very versatile and, depending on size, can produce large pieces of cloth. Looms of this type tend to be used to produce lighter, thinner, fabrics than those produced using a back-strap style loom.