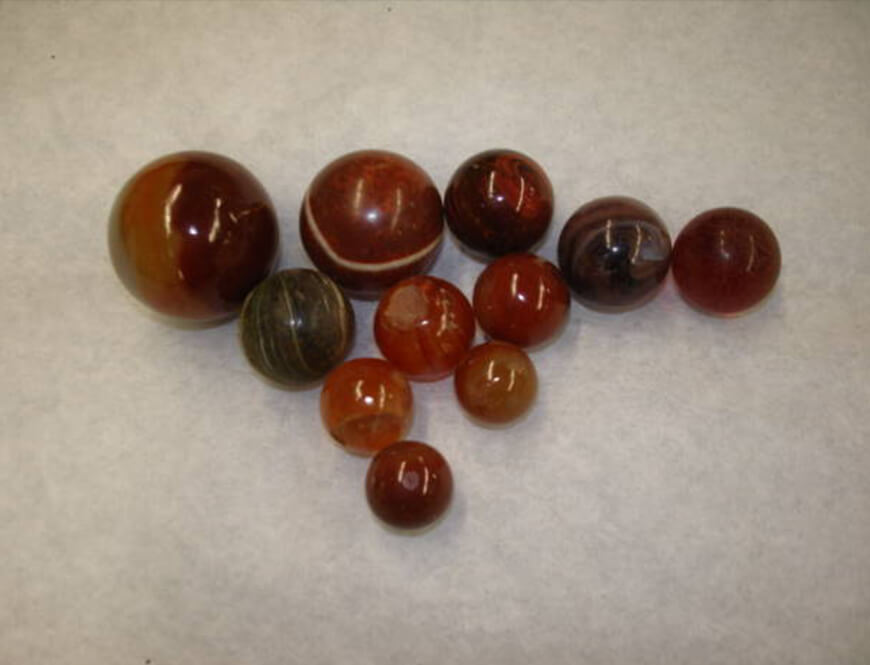 Marbles are one of the oldest games. It’s a game that has taken on various names and rules across the globe, but one thing remained the same, their shape and sizes. This object is a set of eleven glass marbles, ranging in color from brown to green through orange and purple. Marbles can be used in a variety of games. Marble games teach patience, tactic and skill.

Rome, Italy has some of the earliest evidence of marbles. These early Roman marbles were made of clay or stone. One game the Roman children played with marbles involved building a castle or pyramid out of nuts to which they would then launch the marbles at it until it came tumbling down. Another game, more like what we see played today, was to create a triangle or a square on the ground and try to get as many of your marbles into it as possible. Other early evidence of marbles has been found in Egypt. Archaeologist unearthed similarly shaped clay spheres in Egyptian children’s tombs. These buried keepsakes were placed in the tomb for the children to have in the afterlife.

Marbles are played with across the globe and have been made of many materials: glass, porcelain, clay, stone, even wood. As glass and porcelain marbles started to be made they were collected and played by the wealthy. The time and skill needed to hand-make the glass and porcelain marbles was costly. It was not until the 1840s that Germany began to mass-produce glass marbles. It was several years later, in the 1880s that the United States started to mass-produce as well. So instead of a few skilled craftsmen making a handful of glass marbles, there were factories with machines producing thousands of marbles at a time. Samuel C. Dyke owned one of the United States first toy companies to begin mass-producing marbles, the American Marble & Toy Manufacturing Company. This marble manufacturing company opened the door for many other companies, just after the peak of the industrial revolution, to a niche market in children’s toys. Marbles are now a game for anyone, of any age or class around the world.

Yet, marble games are not just for children. With time the rules and regulations became more extravagant and the avid players continued to play and perfect their skills at the game they loved even after childhood. The World Marbles Federation manages the international rules and regulations for the official game of marbles and hosts the world marble championship. There are three types of official marble games you can play: classical, short and extended. Each game needs at least ten marbles and they cannot be made of metal. The most common marble materials today are glass and porcelain.

Players must use different colors than one another to avoid confusion during the game. To decide who goes first, instead of flipping a coin, players have a ‘throw-up’. This is when players flick their marble toward the center hole of the playing ground and the one who comes closer to the hole wins the throw-up. The playing ground starts with a hole 3.5-4.5 inches in diameter and at least 2 inches deep. Then there is a circle around the hole called the throwing line, this line is at 3 feet away from the hole all the way around. The championship game uses a large playing space and is highly regulated.