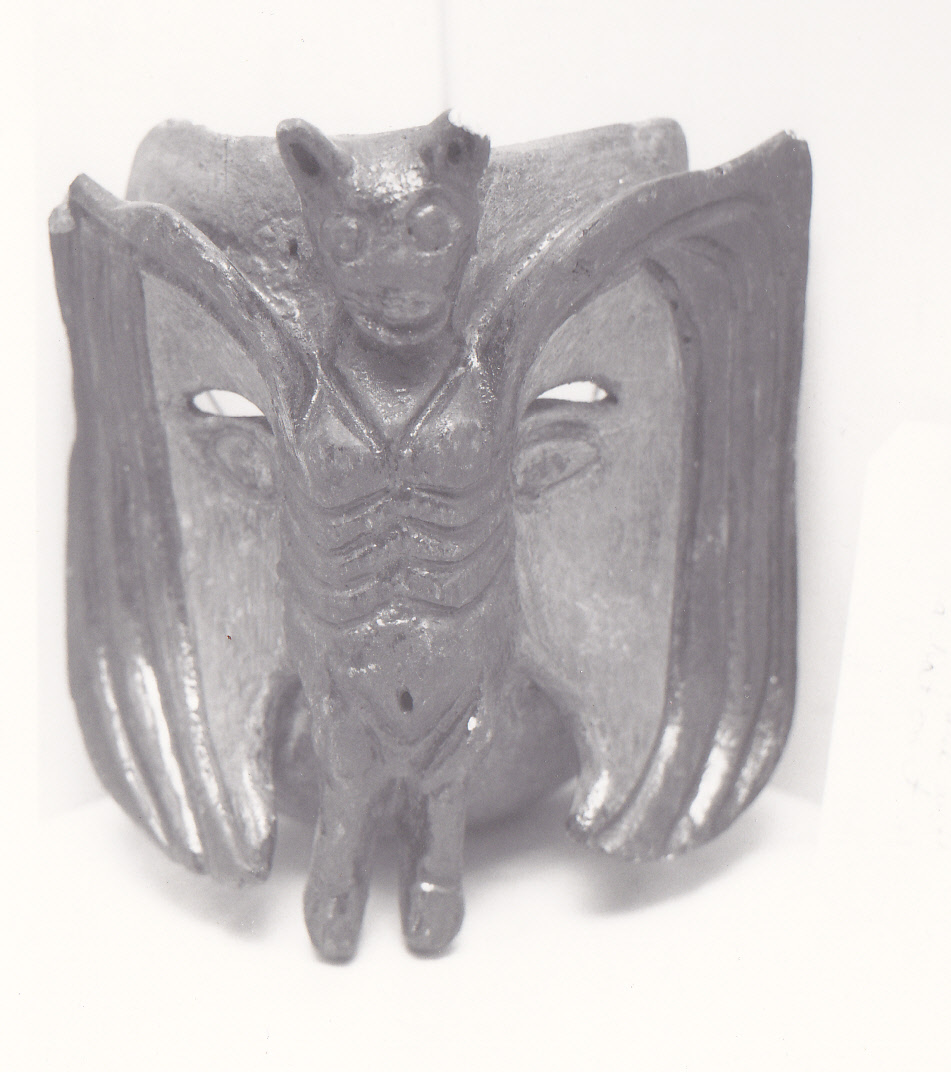 This wooden mask is carved from wood and painted red with a black bat on it.  This mask was made to be used for a performance of Los Pastores and was meant to be worn by the actor portraying Lucifer.  Los Pastores is a morality play that takes place around Christmas time and is about the shepherds’ journey to Bethlehem to see the infant Jesus Christ.  The character Lucifer attempts to temp the shepherds with sinful diversions, so as to keep them from adoring the child.  The play has humorous scenes, sound effects, bright handmade costumes and masks that are used to keep the audience entertained.  The audience will sometimes be huddled up in blankets or dressed as shepherds themselves.  This type of play is a Pastorela, which is a play that was used during the Spanish Colonial Era to teach the Bible stories to the native inhabitants of Mexico to help convert them to Christianity.  After the Missions closed, troupes of actors would still go around the villages performing these plays. Today these plays are generally performed by volunteers from the community portraying the different characters.

The Colonial Era of Mexico and the southwestern United States starts with the conquest of the Aztecs and other native cultures.  With the conquest there was the introduction of Catholicism and the start of the conversion process of the natives.  Since most of the natives were illiterate and were not fluent in Spanish, the missionary priests would explain biblical stories through performances.  The intention of these performances was to teach the stories and lessons from the Bible in such a way that they were simplified and easy to follow.  These performances would later evolve into the types of plays that are put on today, like Los Pastores.

In San Antonio Los Pastores is performed every year at Mission San Jose, as well as other churches throughout the city.  Our Lady of Guadalupe Church here in San Antonio has been performing Los Pastores since the early 1900’s using a version of the play that was translated and edited by Fr. Carmelo Tranchese.

— By Jennifer McPhail. Edited by Kathryn S. McCloud.
Back To Collection Blog
Join Our Newsletter!
Get the latest news & updates about ITC.
Sign-Up Today!