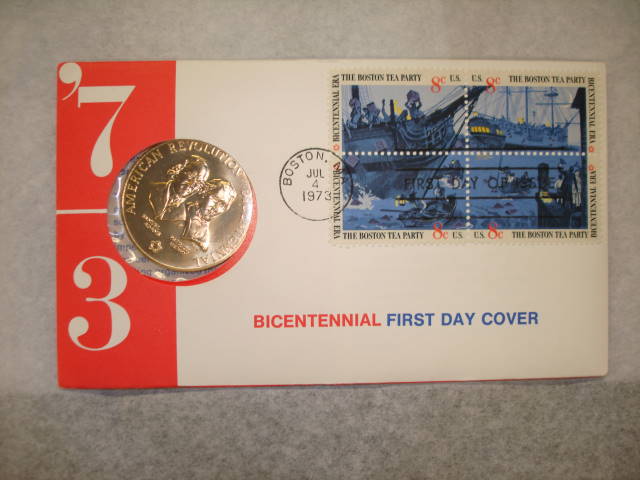 This object is a commemorative medallion issued by the United States Department of the Treasury in honor of the Bicentennial of the American Revolutionary War. This is the second medallion issued in a series of five, for information about the first medallion, please see our other blog post. The front side of the medallion shows a profile of Samuel Adams and Patrick Henry, while on the other side there is an image of a man on horseback speaking to two individuals. Around the edge on the backside it reads “Committees of Correspondence to Unite the Colonies.” The medallion was issued with two information cards and another medallion inside an envelope that had four commemorative stamps on the front. The second medallion is made of plastic and shows the official logo of the American Revolution Bicentennial.

Samuel Adams and Patrick Henry were both important in the protest movement that was going on in the American Colonies during 1773. Adams was a leader of the “Sons of Liberty” as well as a leader of the Committees of Correspondence. Henry was also a member of the Committees of Correspondence, as well as a statesman from Virginia. Both Adams and Henry were great orators (public speakers) and both delivered many public addresses to encourage and show their support for Independence from Britain. One of the most famous speeches is Henry’s “Give Me Liberty or Give Me Death” speech which he delivered on March 23, 1775 at St. John’s Church in Richmond Virginia.

The Committees of Correspondence was created in March of 1773 and was a way for those who believed in independence to inform each other and the populace as to what the British policies were. The first meeting was held in Boston in November of 1772 and was formed by Samuel Adams and others. The meeting in 1773 took place in the Virginia House of Burgesses and had such members as Thomas Jefferson and Richard Henry Lee. It was also a way for the populace to organize against the British. By 1774 all but two colonies had such committees operating. These committees were instrumental in paving the way for Independence from the British.

The four commemorative stamps that are on the front of the envelope are in honor of The Boston Tea Party which took place on December 13, 1773. During the early part of 1773 the British passed the Tea Act which was another taxation that the patriots feared would make colonial governors less accountable to the legislators. The patriots dressed as Native Americans, went on board the ships at night, and broke open the tea chests on board the ships and dumped it into the bay. There were several such tea parties held on down the coast, but the one in Boston is the most famous of these as it was the first.

This medallion was launched in 1973, which was the 200th anniversary of the Boston Tea Party. There were a total of five medallions issued with one medallion being issued for each year of the American Revolution.