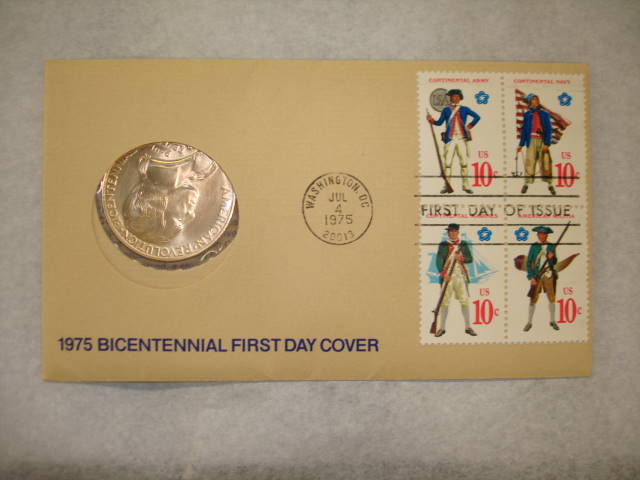 This object is a commemorative medallion issued by the United States Department of the Treasury in honor of the Bicentennial of the American Revolutionary War. This is the fourth medallion issued in a series of five, for information about the first, second, and third medallions, please see our other blog posts. The front side of the medallion has a profile of Paul Revere and on the backside is an image of the Minuteman Statue that stands on Lexington Common. Around the edges of the back, the top reads, “Lexington – Concord” and on the bottom reads, “The Shot Heard Round The World.” The medallion was issued with two information cards and another medallion inside an envelope that had four commemorative stamps on the front. The second medallion is made of plastic and shows the official logo of the American Revolution Bicentennial.

Paul Revere was born in 1734 in Boston, MA. Revere learned the art of gold and silversmithing from his father. When Paul was nineteen (and nearly finished with his apprenticeship) his father died, leaving Paul as the family’s main source of income. Two years later, in 1756, Revere volunteered to fight the French at Lake George, New York, where he was commissioned as a second lieutenant in the colonial artillery. During the years prior to the Revolutionary War, Revere was a rider for the Committees of Correspondence in Boston. Committees of Correspondence were colonial groups that organized events and information needed to work against the British and their policies. Revere was also a prominent member of the “Sons of Liberty.”

Revere is most famous for his “Midnight Ride” where he warned the Colonial Minutemen that the “British were coming.” While this makes an exciting story it is an exaggeration of the real events that took place. The story was written by Henry Wadworth Longfellow and he started the legend that Revere rode to warn the colonials about the British. The actual events were less dramatic, Revere was not the only one to ride the night of April 18, 1775, William Dawes and Dr. Samuel Prescott also were riding to warn that the British were advancing. Revere was able to get to Lexington where he warned Samuel Adams and John Hancock that British troops were marching to arrest them. Dawes, Revere and Prescott then decided to ride ahead to Concord where munitions and arms were being stored. All three men were captured by the British, but Prescott was able to escape almost immediately and he was the one to finish the ride and warn Concord. Revere was released much later, but he made it back to Lexington in time to see part of the battle on the Lexington Green. Revere had 16 children and died on  May 10, 1818 at the age of 83.

The Battles of Lexington and Concord changed everything in the fight for Independence. Both battles were fought on April 19, 1775, with the first one taking place at Lexington and the second at Concord. At dawn around 700 British troops arrived on the Lexington Green and ordered the 77 colonial militiamen to drop their weapons. The commander of the militiamen had ordered them to disperse when a shot rang out. The British fired several volleys and when order was restored there were 8 dead colonials, with 9 injured, only one British soldier dead. No one knows who fired the first shot and both sides accused the other. The British continued on to Concord to recover the munitions depot they had been informed about. When the British arrived at Concord almost all of the colonial arms and munitions had been removed and secured elsewhere. The British decided to burn what was left; the fire got slightly out of control. The Concord militiamen were watching from higher ground and they thought the British meant to burn the town, so they headed to Concord’s North Bridge. The British fired first, but when the militiamen returned fire the British started to retreat. This return of fire is known as the “Shot heard round the world” and this phrase was coined by Ralph Waldo Emerson who penned the poem “Concord Hymn.” As the British were heading back to Boston, the colonial militiamen attacked from behind trees, walls, and buildings. The British suffered only 250 casualties, while the militiamen had around 90 casualties. The image on the back of the coin is “The Lexington Minuteman” statue designed by Henry Hudson Kitson and erected in 1900.

The commemorative stamps on the front of the envelope are in honor of the 200th anniversary of the United States Armed Forces. On June 15, 1775 the Continental Congress commissioned George Washington as the “Commander in Chief” to ready the Continental militia into a fighting force that could stand against the British. Each stamp shows the typical uniform that was associated with each branch during the Revolutionary War and for sometime after.