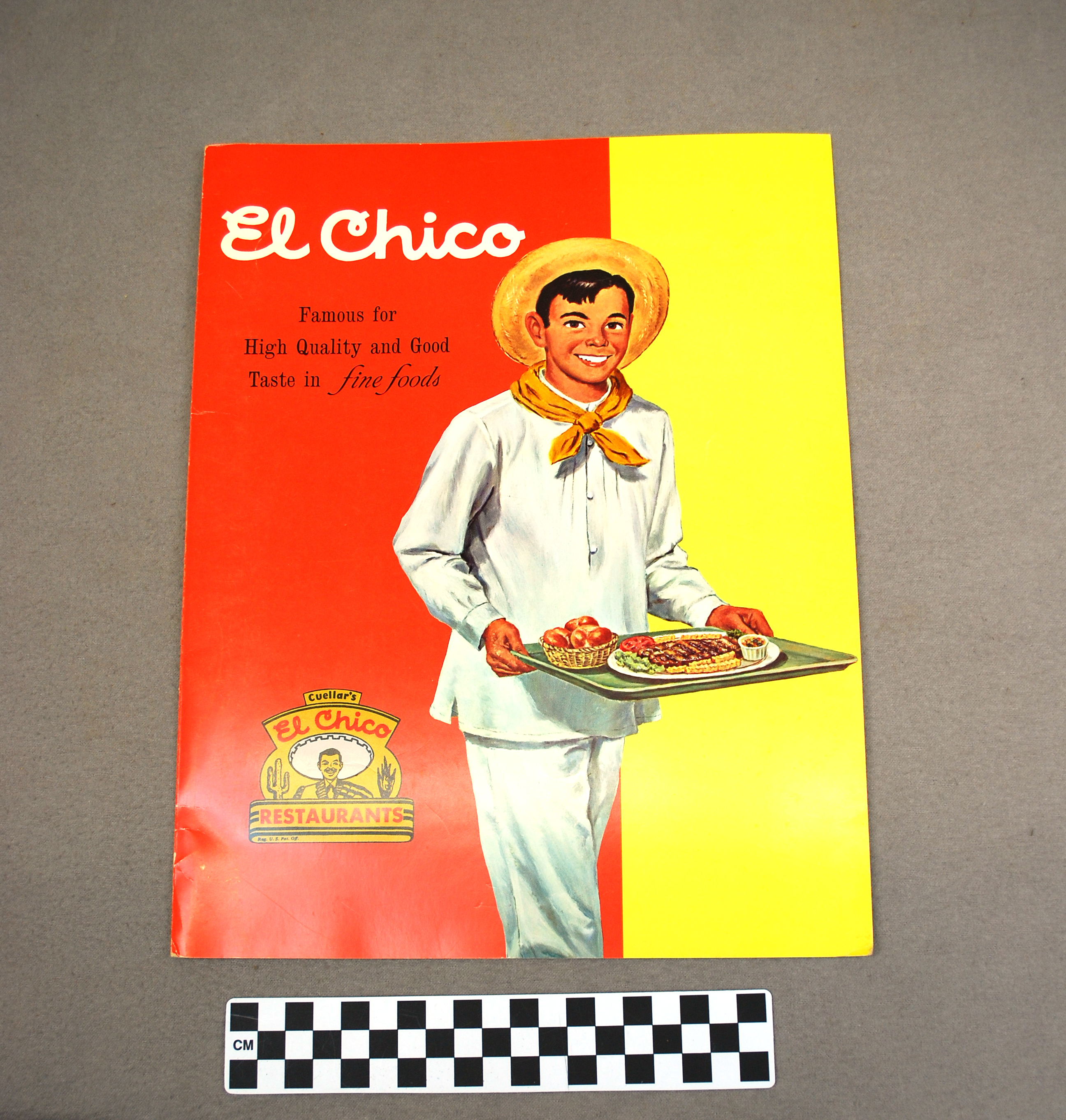 This item is an El Chico menu from the 1960’s. El Chico is a Mexican restaurant chain in the southern United States. The history of the El Chico restaurant begins with the Cuellar family in the late 1800’s. Adelaida Cuellar was born near Matehuala, Nuevo Leon, Mexico on May 30, 1871. In 1892, Adelaida moved to Texas with Marcario Cuellar, where the couple eventually married in Laredo, Texas. Speaking only Spanish, the couple worked on farms near Laredo, Lockhart, Rosebud and San Marcos. In 1913 Adelaida and Marcario relocated their 11 children to Kaufman, Texas where they found work as sharecroppers.

By 1926, they had 12 children that Adelaida needed to help support. In order to make extra money, she sold homemade tamales at the Kaufman County Fair. She was so successful that she did the same thing the next year. Other working-class Mexican immigrants also found they could make additional cash by selling food, often during festivals. In San Antonio during the 1880’s, vendors (often Mexican women) called “Chili Queens” would set up stalls in the city square. Some stalls would sell chili con carne with bread for only a dime. In the 1890’s tamale men would push their carts around town selling their wares. The city of San Antonio banned tamale men from certain neighborhoods around town. Eventually they allowed street vending in the 1940’s as long as they met certain criteria. These were not the only difficulties vendors of Mexican food encountered.

In Los Angeles, between 1900 and 1925 the city council tried to pass legislation barring tamale wagons. In 1903, vendors joined together to present the city council with a petition signed by 500 of their customers. The city council succeeded in banning them, but they continued to sell their food nonetheless. Those men came to be known as loncheras. Vendors were sometimes exceedingly popular, like the vendors at the San Antonio Chili Stand selling food at the 1893 World’s Fair in Chicago.

At first, some Americans viewed Mexican food as dangerous. Spicy foods were stigmatized and companies started to sell their own versions of canned Mexican food with ingredients advertised as better than the original. It wasn’t until the 20th century with the arrival of family restaurants that Mexican-Americans were able to redeem their culinary culture.

In 1928 two of Adelaida Cuellar’s adult children, Frank and Amos, borrowed $350 from her to open a restaurant in Kaufman (it closed after 2 years due to the onset of the Great Depression). Adelaida cooked for the restaurant. By the time their family restaurant opened, Mexican food had been in the United States for some time. The first business to offer Mexican food was San Antonio’s Original Mexican Restaurant in 1900.

In 1933, Adelaida revived the family restaurant in Kaufman. Her sons opened several other restaurants in the 1930s but none enjoyed success until they opened El Charro, later known as El Chico, in 1940. Opened in Dallas, the restaurant featured air-conditioning, which allowed the restaurant to stay open during the summer when others in the area usually had to close. As they grew more successful, they expanded their restaurant chain and Adelaida’s sons earned the nickname “Mama’s Boys.” In 1955 the family entered into the frozen food business. By the time Adelaida died on April 13, 1969 in Dallas, Corporation had extended their interests into 20 different business ventures which ranged from restaurants to canning.

The food industry allowed a number of Mexican immigrants to find success in the United States, including Larry Cano of Los Angeles. He got his start as a dishwasher before eventually purchasing El Torito, a restaurant chain that popularized sit-down Mexican dining in America. The popularity of Mexican food increased so much that by the 1990’s, Mexican food became one of the top 3 varieties of ethnic foods in the United States. In 1991 Salsa replaced Ketchup as the top selling condiment in the U.S. Today, Mexican food has become an integral part to American culture.