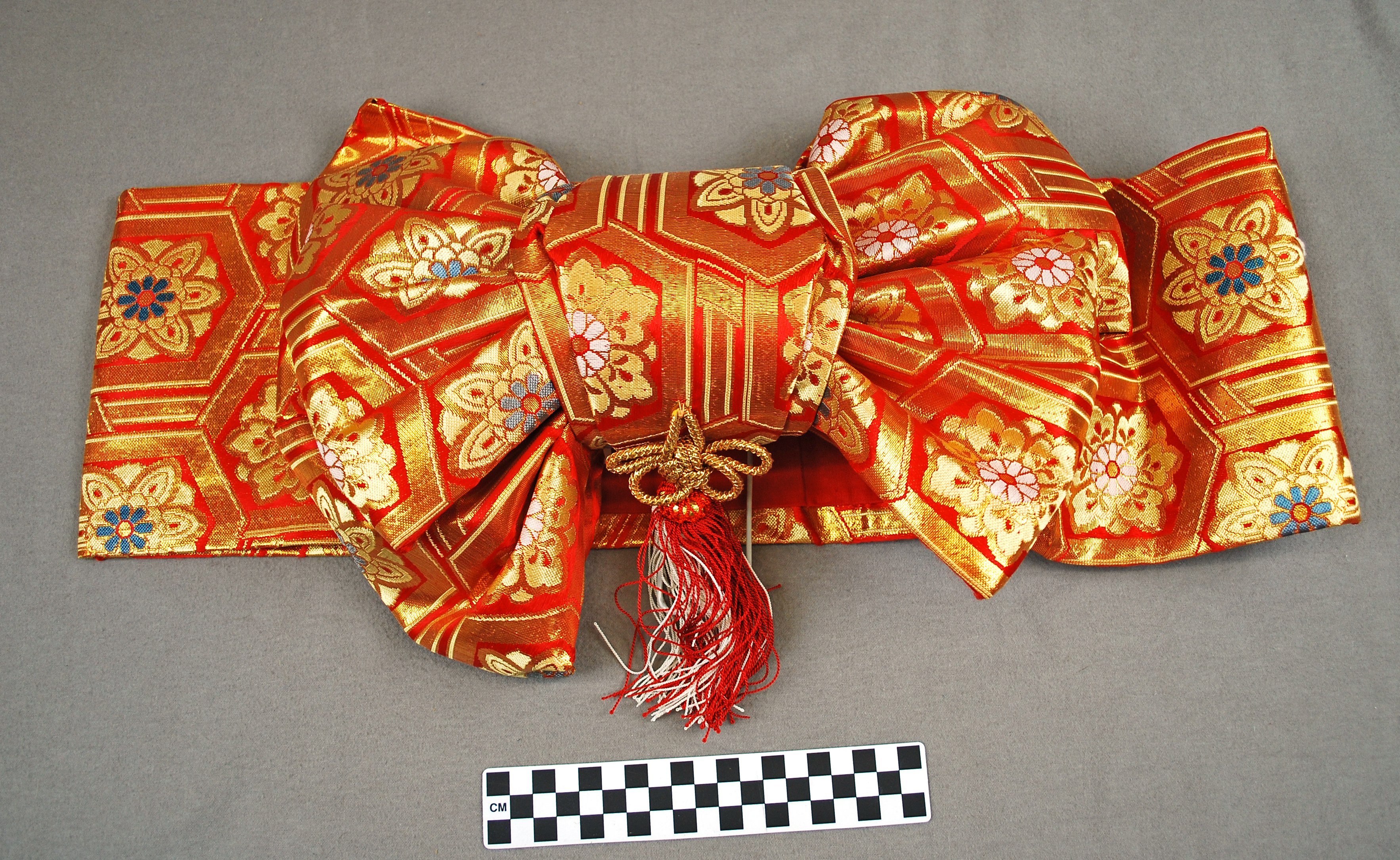 This item is an obi (oh-bee), a large sash used in traditional Japanese clothing for women. The obi functions as the tie used to keep traditional Japanese robes, known as kimono (kee-moh-no) secured in place. The obi is wrapped around the woman’s waist over the kimono and is tied in a large knot behind her back. The general Japanese word for this knot is musubi (moo-sue-bee), but there are many different names for the different shapes and ways the obi can be tied.

Obi come in various sizes, shapes, colors, and material depending on the type of kimono worn or the complexity of the knot the obi will be tied in. More formal obi, for formal kimono, are often made of luxury materials such silk or brocade, and tend to be more decorative to match the kimono. More informal obi that are used with everyday kimono, known as yukata (you-kah-tah), are often made with cotton, polyester, or less expensive materials. These kinds of obi are usually plainer in design. In traditional Japanese culture, men who wear yukata for relaxation also wear obi— but these obi are usually much smaller, darker in color, and less ornate than the women’s version.

What are the different types of obi? How are they tied?

In Japanese culture, there are many different types of obi for different occasions. The length of an obi can indicate what kind of kimono it can be worn with, the type of knot it can be tied in, the age of the wearer, and even the event that the wearer is going to.

There are five different lengths of obi that are the most used and commonly recognized today.

How a Maru Obi looks when worn. Image via leolaksi.wordpress.com

From formal to informal, the first one is called the maru obi, and it is the most formal. Maru obi can be up to 15 feet long! Because they are so big, they are often only used for tying the largest, most ornate knots such as those used for brides in a Japanese wedding ceremony (which are covered) or for traditional performing artists known as geisha (gay-sha).

The most popularly used formal obi today is the fukuro (hoo-koo-ro) obi. At 15 feet long it matches the maru obi in length, but is often less decorative and usually only used by younger, unmarried women for special occasions such as the Coming of Age Day at age 20. The fukuro obi is most often worn with the furisode (hoo-ree-soh-day) kimono, which is characterized by its long sleeves. The fukuro obi is often tied in the tateya (tah-tay-yah) musubi style to resemble the wings of a sparrow.

The semi-formal nagoya (nah-go-yah) obi is the most used obi in modern Japan. It was invented in the 1920’s by a young woman in Nagoya, Japan and is named after the city. It’s about 10.5 feet in length with a very distinguishable pattern: one half of the obi is less wide than the other! This gives the nagoya obi more flexibility, which allows the wearer to create many informal and semi-formal knots. The most famous knot tied with the nagoya obi is the taiko (tai-koh) musubi, which translates into the drum knot.

The informal obi known as the hanhaba (hahn-hah-bah) obi is most often worn with the informal kimono known as yukata. They are usually thin and made out of more common fabric, but come in large, stylized patterns and can be tied in various ways. The most popular knot for a hanhaba obi is the chouchou (choh-oo-choh-oo) musubi which looks like a butterfly.

Tsuke obi or the work of a master? It can be hard to tell! Image from hanamiweb.com

Lastly, the shortest obi is the tsuke (soo-kay) obi also known as the ready-tied obi. These obi are the shortest because they only give the appearance of a full obi without the work of tying a full-length obi and knot. Depending on the fabric of the obi, and the pre-tied knot, the tsuke obi can be formal or informal. Today, many of the more intricate obi knots are pre-tied in stores and sold as separate pieces of the obi itself – this is because many Japanese people today don’t wear kimono as a regular part of life. This means that pre-tied obi or a more knowledgeable person (such as a professional kimono stylist or older member of the family) are the few options for people who want to wear more sophisticated obi styles.

Obi can be even more expensive than the kimono they’re paired with. The price of the kimono and its obi depend on the material, age, quality and style of the clothing. While traditional, vintage kimono can be as expensive as cars (around $20,000 USD), obi can be equally expensive. Today, a modern formal kimono can cost as little as $100 USD. Formal obi, on the other hand, can cost three times that amount.

However, despite these costs, obi are an important part of traditional Japanese clothing that continue to illustrate the colorful heritage of Japan.