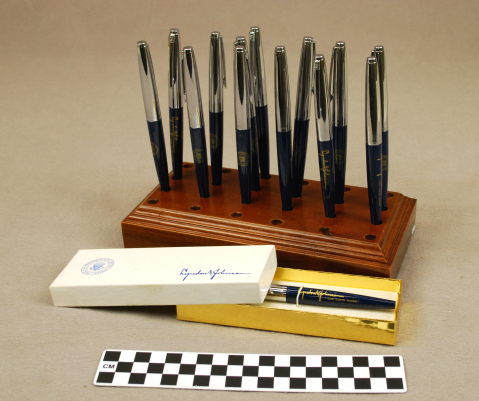 This object is a set of fifteen pens with Lyndon Baines Johnson’s name on each one. The pens are individually boxed in gold foil boxes with white lids that also bear the President’s name.

Presidents often use multiple pens to sign a bill and then give those pens to the people involved in getting the bill passed. There is a famous photograph of President Johnson handing several pens used to sign The Civil Rights Act into law to Dr. Martin Luther King, Jr. It is believed that the custom began during Truman’s Presidency. President Obama recently used twenty-two pens to sign the Affordable Health Care Act. President Clinton used forty pens in 1997 to sign the Taxpayer Relief Act. President Lyndon Baines Johnson holds the record for the most pens used to sign a bill. He used seventy-two pens to sign The Civil Rights Act of 1964.

President Johnson was born and raised near Johnson City in the Texas Hill Country. He graduated from what is now known as Texas State University. He worked as a teacher in Cotulla, Texas before serving in the Navy during World War II where he earned a Silver Star Medal. He then served six terms in the House of Representatives before being elected to Congress in 1948. In 1960, Johnson was elected Vice-President along with President John F. Kennedy. After President Kennedy was assassinated in 1963, Johnson assumed the role of President and was then re-elected for one term as President in 1964.

While we have no information about whether these fifteen pens were used to sign a bill, President Johnson signed many important bills into law during his Presidency, including the Civil Rights Act, Medicare, and the Voting Rights Act, to name a few. Thanks to President Johnson and his Public Broadcasting Act, we have Public Television which brings us educational shows like Sesame Street and NOVA. Because of President Johnson’s War on Poverty, the Head Start Program was created to allow disadvantaged four and five year-olds to attend pre-school. The list of his landmark bills is several pages long.

Johnson’s term as President was filled with controversy due to the United States’ involvement in the Vietnam War. Even though he accomplished so much for the American people, his inability to resolve the Vietnam conflict caused him to refuse to run for another term as President. After finishing his term, Johnson moved back to Texas to retire on his ranch in Johnson City. He died on January 22, 1973.