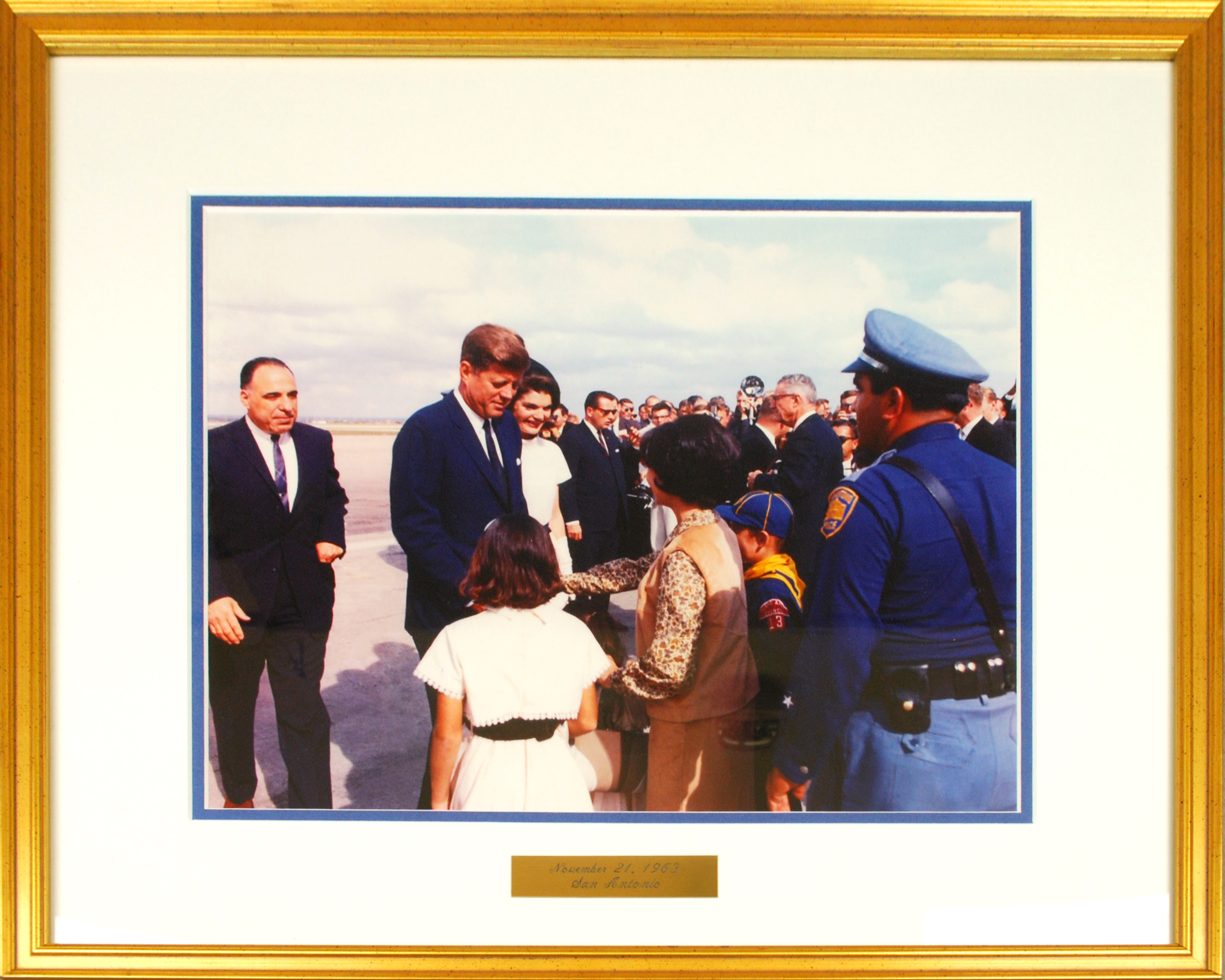 When looking at a photograph, many people will remember how they felt the exact moment it was taken. Since the invention of photography, photographs have been capturing select moments and events, such as the aftermath of battles, a President’s inauguration, and even tragedies like September 11. However, photographs have also become an important part of the historical record, allowing people to travel back in time. This object is a framed presentation photograph of President John F. Kennedy and Jackie Kennedy, taken on November 21, 1963. The photograph shows the President being greeted by an unidentified woman and three children at the San Antonio International Airport. In the image Congressman, Henry B. Gonzalez and San Antonio Mayor, Walter W. McAllister Sr. are also present. President Kennedy visited San Antonio as part of five city tour of Texas in 1963. The photograph is important because only a day after it was taken President Kennedy was assassinated in Dallas, TX. The assassination of President Kennedy shocked America and many people still remember the effects the President’s death had on them.

John F. Kennedy nicknamed “Jack” became the 35th president of the United States of America on November 8, 1960. JFK was elected president in one of the closest elections in U.S. history. He was the youngest man ever elected as President, as well as the first Roman Catholic. JFK also took part in the first televised Presidential debates against Richard Nixon. When he ran for President in 1960 many people believed he was inexperienced due to his age. However, after the televised debates the public changed their mind. JFK showed support for Martin Luther King Jr. when he was arrested, although because of this he lost some support in the south, he also gained support from those who supported the Civil Rights Movement. One of John F. Kennedy’s famous quotes, “ask not what your country can do for you — ask what you can do for your country” was spoken during his inaugural address on January 20, 1961. John F. Kennedy and his wife Jaqueline Bouvier Kennedy would go on and capture not only America but the world with their youth and glamor.

In the fall of 1963 John F. Kennedy was getting ready to start his reelection campaign and knew that Texas was a key state. On November 21 the President and First Lady started their two day, five city tour, through Texas. The first stop was San Antonio, a city John F. Kennedy had only visited once before in 1960. The photograph above captures one of many moments of President Kennedy’s arrival in San Antonio in 1963. When the President and his motorcade left the airport they headed to downtown San Antonio where they were greeted by thousands of spectators. The President then headed to Brooks Air Force Base, now Brooks City Base, where he gave a dedication speech for the Aerospace Medical Center. He spoke about the importance of space and stated, “This nation has tossed its cap over the wall of space, and we have no choice but to follow it. Whatever the difficulties, they will be overcome; whatever the hazards, they must be guarded against.” After the speech President Kennedy spoke to four airmen who were inside an altitude chamber. The President and his entourage then made their way to Kelly Air Force Base where Air Force One departed to Houston, TX to continue the tour.

Even though President Kennedy only spent a few hours in San Antonio, 50 years later San Antonians still remember his visit to the Alamo City. Many people witnessed President Kennedy pass by in his motorcade, some shook his hand at the airport, and others saw him at Brooks Air Force Base. For some, they felt seeing the President was one of their most memorable life experiences, others were stuck by the beauty of the day and the vitality of the young President. So when news of JFK’s assassination made its way to San Antonio, his death had a great impact on the people who had seen him just the day before. One of the four airmen who had been visited by President Kennedy in the altitude chamber remembered, “There was nothing but tears. We felt such closeness to him.” Although, President Kennedy’s visit to San Antonio was just a small piece of history, for those in San Antonio the visit will always be a special day.