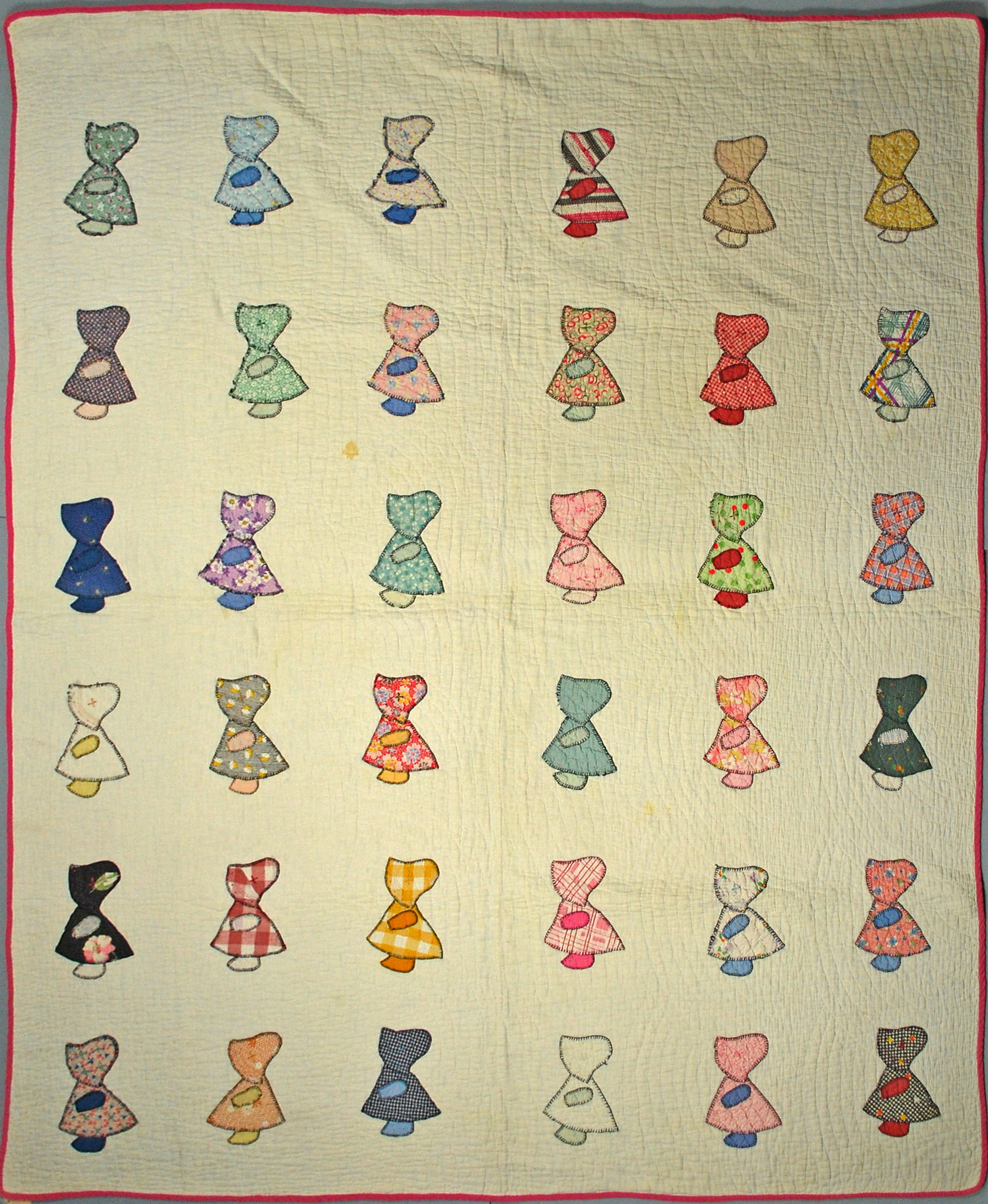 This object is a quilt that was made using the “Sunbonnet Sue/Dutch Doll” pattern. The images of “Sunbonnet Sue” are sewn on to the quilt in a technique that is called applique. Applique is the process of attaching one or more smaller pieces of fabric to the top of a larger background piece of fabric. This technique is different from a piecework (or patchwork) quilt top, where the top of the quilt is made from many pieces of fabric that have been sewn together near their edges. In both styles of quilt the batting is sandwiched between the back piece of the quilt and the top, and then all the layers are quilted together to form the quilt.

This is Melcher’s rendering showing Molly (left) and May (right) reading a page from The Sunbonnet Babies’ Primer. Image from Winter Park Public Library

The pattern “Sunbonnet Sue” was inspired by illustrations of little girls in bonnets, first seen on greeting cards in the late 1800’s. These illustrations were drawn by British editor Kate (Catherine) Greenaway (1846 – 1901) and they inspired Victorian women to place similar images on their quilts, creating the first “Sunbonnet Sue” quilts. An American illustrator by the name of Bertha Corbett Melcher (1872 – 1950) is often credited as the “Mother of the Sunbonnet Babies.” Melcher illustrated children’s primers and published her first book in 1900 titled “The Sunbonnet Babies,” which depicted young girls with their faces hidden by bonnets. After this first publication, writer Eulalie Osgood Grover hired Melcher to illustrate primers written by Grover. In 1902 the primer, “The Sunbonnet Babies’ Primer” was published and introduced Molly and May as the original Sunbonnet Babies. In 1905 Grover wrote “The Overall Boys” after repeated requests for little boys to be included in the primer stories. This series of primers continued for years with several stories and songs written about the the Sunbonnet Babies and the Overall Boys.

The name, “Sunbonnet Sue,” first began to be used late in the Depression era. Though in the southern part of the United States the pattern was also referred to as “Dutch Doll” until the 1970’s. There was also a boy pattern created, though there are several names for this pattern, such as “Overall Bill, “Overall Andy,” “Sunbonnet Sam,” “Suspender Sam,” “Fisherman Jim,” and many others.

“The Sun Sets on Sunbonnet Sue.” Image from The Quilt Index.

In 1979 there was a quilt produced by the quilters of Lawrence, Kansas who had named themselves “Seamsters Union Local #500,” which was entitled “The Sun Sets on Sunbonnet Sue.” In each block of this quilt Sue is shown being murdered in a different way. This inspired other quilter’s groups to create similar quit designs which showed Sue being killed or behaving in very non-traditional Sue type behavior, such as smoking, drinking, stealing, and other taboos. There is even a modern collection of embroidery patterns called “Sinbonnet Sue” that uses Sue to illustrate the Seven Deadly Sins and show her rebelling against societal norms.