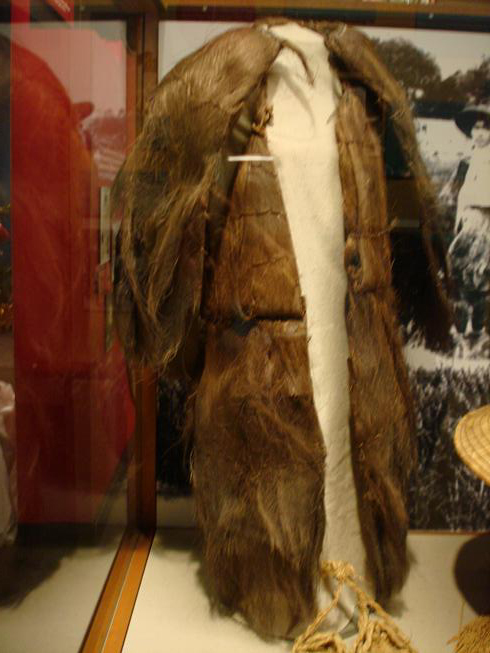 This object is a Japanese raincoat outfit that was typically used by Japanese farmers and fisherman to protect themselves from rain, the cool weather, and the heat. It consisted of a palm straw raincoat a conical “coolie” hat and sandals. This type of raincoat was made using either leaves from palm trees, straw, or seaweed. The plant fibers were typically folded in half and stitched together into sheets of material, the sheets were then layered and stitched in an overlapping pattern to direct rain off the wearer, similar to shingles on a roof. Raincoats and capes of this type have been used in many Asian cultures for centuries and variations of this type of garment were also used as camouflage for Japanese soldiers during World War II.

Japanese immigration to Texas started in 1902 due to overpopulation and limited farm land in Japan.  At that time, Texas rice production was under developed. The Houston Chamber of Commerce and officials of the Southern Pacific Railroad asked Japanese consul general Sadatsuchi Uchida to tour the gulf coast region of Texas for areas of potential rice production. Local Texan farmers welcomed Japanese rice farmers to the area in order to advise them on how to grow and harvest rice. These early immigrants even brought a gift of rice seed with them from the emperor of Japan.

Two families successfully setup prominent rice farm sites. The Houston chamber of Commerce invited Seito Saibara to settle a community of Japanese-American Christians in 1903 in Webster near Houston and Kichimatsu Kishi had attended Hitotsubashi University in Tokyo before arriving. He founded the Kishi colony near Terry in 1907 in Orange county near Beaumont, Texas. Both Seito Saibara and Kichimatsu Kishi brought families to help work the fields and the male tenants sent for their wives. In time the two colonies prospered and attracted more Japanese who owned and operated rice farms nearby.

The introduction of imported Japanese seed in 1904 was an important development of the Texas Gulf Coast rice industry. Previously, seed rice had come from Honduras or the Carolinas, due to government regulations making Japanese import more difficult. The first three years harvest, which produced almost double the amount per acre compared with the average production from native rice seed, was sold as seed to farmers in Louisiana and Texas. Seito Saibara, along with the many of the original Japanese-Texan immigrants began rice production in Webster, TX in Harris County, and is often credited with establishing the Gulf Coast rice industry. Though Japanese-Texans also came to urban areas and had different types of jobs their biggest contribution is certainly to be credited in the development of rice patties.

Another wave of Japanese-American families came from the west coast driven by a rising anti-Japanese movement in California and the west coast. They settled mostly in Cameron and Hidalgo Counties in the lower Rio Grande Valley, while some chose El Paso and Bexar Counties.  At first these Japanese immigrants were welcomed but by April 1921 the Texas legislature, following other western states, passed a law prohibiting the owning or leasing of land by foreign-born Japanese. Discrimination against Japanese-Texans would continue for many years, reaching its height during World War II when many Japanese-Texans were imprisoned in Internment Camps, along with others deemed a danger to national security. After the war ended anti-Japanese sentiment in Texas began to fade, partly due to the renowned efforts of the all-Japanese American 442nd Regimental Combat Team (RCT) in saving the 1st Battalion of the 36th Infantry Division, Texas National Guard, the so-called “Lost Battalion.” Their heroic efforts were credited with saving more than 200 Texans in southern France. Additionally, Japanese immigration to Texas was once again allowed by the G.I. Fiancées Act (1946) and the McCarren-Walter Act (1952). These acts allowed American soldiers who had married Japanese women while stationed in Japan to bring their wives back with them to the United States.

Nowadays the importance of Japanese-Texan influence and tradition can be seen and celebrated in events such as the Asian Festival at the UTSA Institute of Texan Cultures.