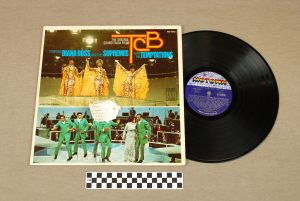 This object is a 33-rpm record album stored in the original record jacket for T.C.B. featuring music from the television special of the same name. T.C.B. stands for ‘Taking Care of Business’ and aired December 9, 1968 on NBC. This was the first of two television specials that starred Diana Ross and the Supremes with the Temptations. The broadcast was nominated for a Primetime Emmy for Outstanding Individual Achievement in Electronic Production. The record of the original soundtrack knocked the Beatles out of the number #1 LP sales slot.

Diana Ross (born Diane Earle), Mary Wilson, and Florence Ballard met while living in Detroit’s Brewster housing project. Due to segregation, African-Americans were obligated to live in separate parts of the city from Anglo-American citizens, often in unsafe conditions. In response to the need for safer housing, Brewster Homes broke ground in 1933 as the first federally funded housing project for African-Americans. The original property featured several town-homes. Eventually in the 1950’s the homes were converted into six towers called the Frederick-Douglass Towers with 14 stories each. The initial process to approve residency was highly selective. Residents were required to meet a number of requirements like income standards and marital status. However, as early as the 1960’s the process became less rigid. As more people moved to the suburbs and as racial tensions increased, the Brewster projects fell into decline. They experienced high levels of drug and criminal activity. The buildings themselves started to fall apart. By 2008 the towers were no longer occupied by any residents and in 2014 the buildings were torn down.

After meeting, the girls formed a quartet, first including Betty McGlown and then Barbara Martin as teenagers. The group was named The Primettes because they started as a sister act to The Primes. Two members of The Primes, Eddie Kendrichs and Paul Williams, later formed the Temptations. Originally, Florence Ballard was the lead singer of The Primettes. However, as time moved on, it was Diana Ross who eventually became the leader the group.

The Supremes on The Ed Sullivan Show, May 1, 1966. Via Wikimedia Commons

The girls had their big break in January of 1961 when the group signed with an all black-owned record label, Motown Records. They changed their name to the Supremes, and by 1964, they had received 7 gold records. Their tenth release “Where Did Our Love Go?” sold 2 million copies and became their first number one hit in the summer of 1964. That same year, they topped the charts with their songs “Baby Love” and “Come See About Me”. In fact, the group had 5 U.S. number one hits in a row between 1964 and 1965.

The Supremes were the most commercially successful female group and among the top 5 pop/rock/soul acts of the 1960’s. They were the first group to have 5 consecutive records reach the top of the bestseller charts. During this decade, the Civil Rights Movement was at its height and the Supremes were embraced as a symbol of African American achievement. They appeared multiple times on mainstream TV with guest appearances on the Tonight Show. In 1967 the group released “Reflections,” the first song to be credited with the groups new name, Diana Ross and the Supremes.

In 1969, Diana Ross left to start her solo career. She starred in several films, including Lady Sings the Blues in 1972, Mahogany in 1974, and The Wiz in 1984. In 1972, she won a Grammy for Top Female Singer and later was named female entertainer of the year. The Supremes last top 40 single after Ross left was “I’m Gonna Let My Heart Do the Walking” in 1976. Diana Ross and the Supremes were inducted into the Rock and Roll Hall of Fame in 1988. No Motown act matched their success and Diana Ross and the Supremes were the second most successful singing group of their decade, next to the Beatles. 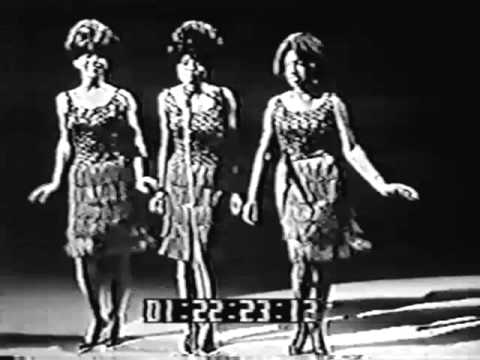 Click the video above to view ‘The Supremes “Come See About Me” on Shindig 11/64’.