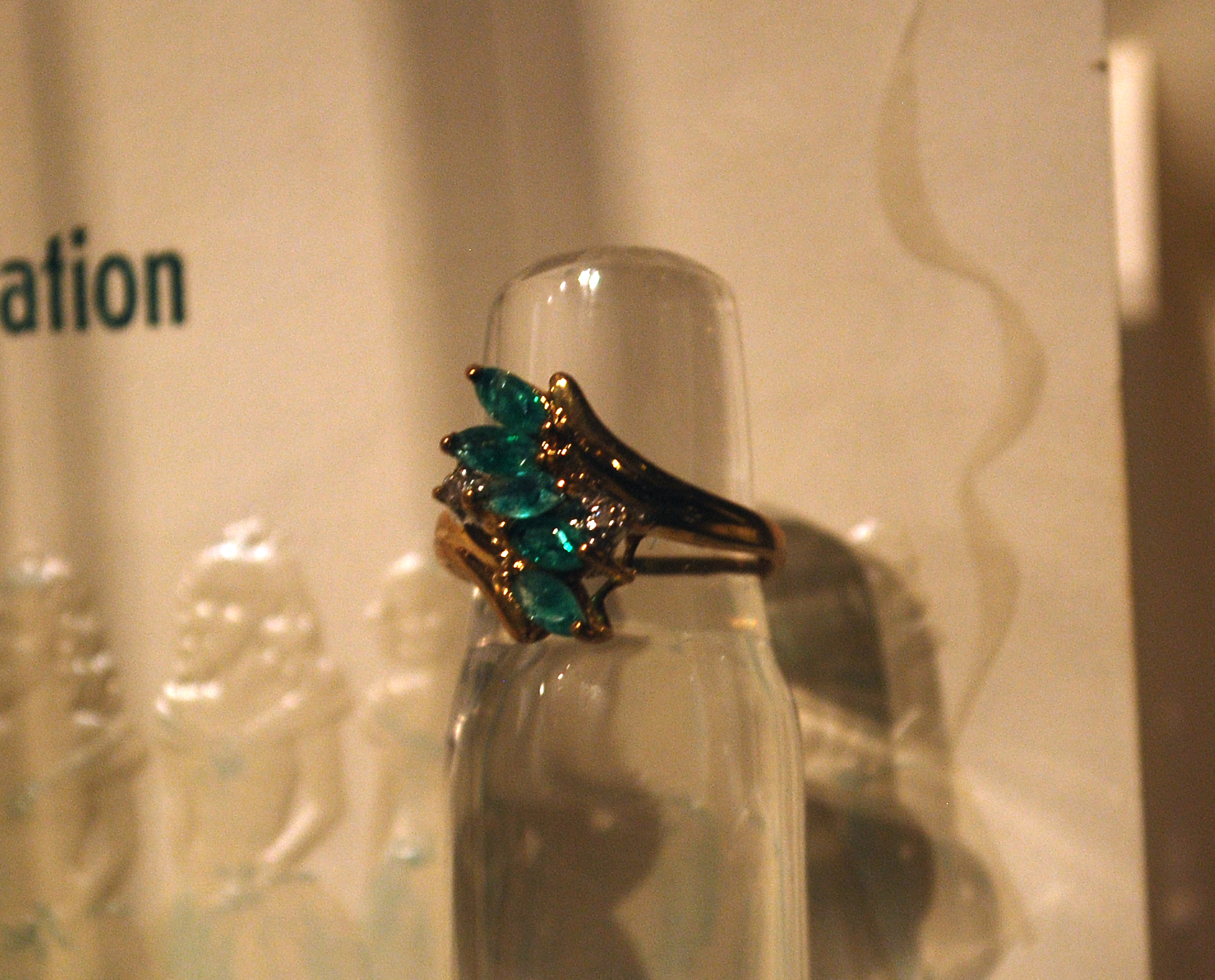 When visiting the San Antonio Riverwalk you might see the occasional teenage girl dressed in a ball gown. Usually she will be with other young boys and girls, also dressed in formal attire. Unless you happen to be visiting during prom season, you have likely stumbled into a celebration called a quinceañera, or a girl’s fifteenth birthday party. The birthday girl is also referred to as the quinceañera. During the quinceañera the young girl will usually wear a ball gown, a tiara, and other forms of jewelry. This object is a 10ct gold birthstone ring; it has 2 rhinestone and 5 synthetic emeralds.

A quinceañera is an elaborate celebration marking a girl’s 15th birthday. This birthday party is a milestone in the young girl’s life. The celebration involves a mass and an extravagant party afterwards. Throughout the mass and party different traditions are performed. The tradition of the quinceañera is practiced in the Mexican culture but also seen in Central and South America, as well as places like Cuba and the Dominican Republic. The origin of the quinceañera is not known, but has been associated with ancient Aztec, Maya, and Toltec traditions. In the Aztec culture a girl turning 15 meant she was ready for marriage. During this time, different ceremonies were performed to ensure the young woman was prepared for her duties in society. When Maximilian I and Carlota occupied Mexico, it is said that the court atmosphere influenced the tradition of the quinceañera and aspects of a traditional European debutante “coming out” were incorporated into this coming of age event.

In the Mexican culture a quinceañera is planned months in advance. Things like the reception hall, music, food, and decorations must be picked out early. The young girl and her mother will pick out the dress that she is to wear far in advance of the event, so that it can be specially tailored to the girl’s figure, if needed. The dress is typically a solid color ball gown. The color of the dress depends on the girl’s preference. The ball gown is supposed to be the first adult gown worn. However, in the modern world, most girls will have probably already worn adult style dresses.

The first event to take place on the day of the quinceañera is a Catholic mass in which friends and family accompany the girl to renew her baptismal vows. This is meant to show that the girl is committed to God by her own free will. During the mass she also takes a bouquet of flowers to the Virgin Mary and asks for guidance. A quinceañera mass has evolved over time. In earlier traditions the whole ceremony would only consist of the saying of the rosary, a prayer and meditation session.

There are other items the girl receives for her quinceañera. For example a birthstone ring like the one shown here is often given to the girl by padrinos (godfather) and madrinas (godmother) or sponsors. The birthstone ring symbolizes the girl’s commitment to her community and to God. The family of the girl anticipates the ring eventually being replaced by a wedding band during her next stage in life.

After the mass, a party or fiesta is held in honor of the young girl. During the party the girl has a first dance with her father, or a father figure. The girl also dances with her court of damas (dames) and chambelanes (chamberlains). A toast is made in honor of the young girl and her accomplishments up until this point in her life. The birthday girl also makes a small speech to thank everyone for accompanying her on the special day. Some traditional activities performed during the party involve the changing of the shoes. This is where the father gives the girl her first pair of high heels. In this event the father takes the girls flats off and replaces them with heels. Another tradition involves giving the quinceañera her last doll. The doll represents the girl leaving childhood and entering a new stage in her life, which is basically what the whole celebration is about.

A quinceañera is one of many coming of age traditions practiced in different cultures. For example in the Jewish tradition a Bar and Bat Mitzvah is celebrated when a boy turns 13 and a girl 12. In this tradition a young man or woman demonstrates their commitment to their faith and recognize Jewish law. In places like the Brazilian Amazon the Satere-Mawe Tribe have a coming of age ritual in which a boy places his hands inside bullet ant lined mittens. This ritual is said to transform young boys into men. The young boy must leave his hands inside the mittens for 10 minutes and repeat the ritual a total of 20 times. The ant bite is said to be as painful as being shot by a gun, which is where the name bullet ant comes from. In Amish communities a period called Rumspringa is practiced. This is a time between the ages of 14-16 in which a young boy or girl are allowed certain freedoms. These freedoms vary by community, but often include being allowed to dress like a non-Amish person, going to the movies, or buying electronic devices. At the end of Rumspringa the young boy or girl must decide to either get baptized and stay in the Amish community, or leave the community altogether.

The celebration of a quinceañera has evolved and continues to evolve as the years go by. Many young girls who live in the United States have even changed the year and celebrate a “sweet sixteen” with the traditions of the quinceañera. For a young girl, her quinceañera is one of the most special events in her life and a day she will never forget.