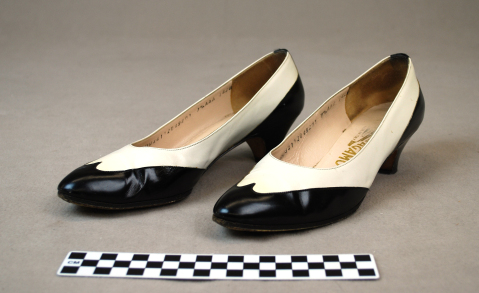 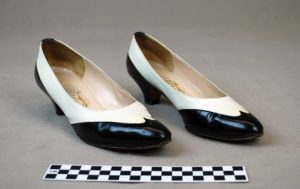 This object is a pair of black and white leather spectator pumps, designed by the Italian designer Salvatore Ferragamo and owned by Lady Bird Johnson. They were loaned to the UTSA Institute of Texan Cultures for a temporary exhibit called “Footprints and Imprints” showcasing famous and influential people through their shoes, and later donated to the museum.

Lady Bird Johnson became the 36th First Lady of the United States when her husband, Lyndon B. Johnson, was sworn in as president following the assassination of John F. Kennedy.  Born Claudia Alta Taylor, Lady Bird received her nickname at an early age, when a nursemaid stated that she was “as purty as a lady bird.” The nickname stuck, and for the rest of her life she was known as Lady Bird. Though her father and brothers called her “Lady,” her husband called her “Bird,” and that’s what she signed on her marriage certificate.

In the 1930s, Mrs. Johnson attended the University of Texas in Austin, earning degrees in History and Journalism. During that time, she met Lyndon B. Johnson, and in 1934 they were married in San Antonio at St. Mark’s Episcopal Church.

When Johnson became President in 1963, Lady Bird focused her energies on her first love- the environment. The country was facing uncertain times, and Washington, D.C. was in need of a facelift.  Having grown up in the outdoors of far East Texas, Lady Bird had an appreciation and respect for the natural beauty of landscapes and wildflowers.

As First Lady, she embarked on a beautification project, which was named the Society for a More Beautiful National Capital. The project consisted of planting millions of flowers throughout Washington, D.C., including tulips, daffodils, roses, and the dogwood and cherry blossom trees that the Capital is so well known for. She stated at the time that “where flowers bloom, so does hope.”

Cherry blossoms and the Washington Monument. Image by Wendy Harman, via Wikimedia Commons.

This proved to be just the start of what became a national campaign, and in 1965, the Highway Beautification Act was passed. Through this Act, Lady Bird was instrumental in restricting junk yards and limiting billboards along highways throughout the country, in addition to promoting wildflower plantings along interstates all over the country.

Mrs. Johnson wasn’t just interested in beautification, but also in conservation. One method she used to bring attention to her campaign was to visit historic sites, national parks, and scenic areas. By taking along the head of the National Parks Service, dignitaries, and media, Lady Bird was able to shine a spotlight on the natural beauty that was in danger of being destroyed all over the country.

After leaving Washington, Lady Bird Johnson focused her attention on Texas. She was the force behind developing ten miles of beautiful hike and bike trails around Town Lake in Austin. In 1982, she teamed up with her friend, actress Helen Hayes, to found the National Wildflower Research Center. In 1995, it was moved to 279 acres in southwest Austin and renamed the Lady Bird Johnson Wildflower Center. The center is dedicated to conservation, education, and beautification through the use of locally available plants and flowers. It is now one of the country’s most credible research institutions, and is run by The University of Texas.

Lady Bird Johnson saw a need to preserve and protect our nation’s natural beauty before it was destroyed by industry. Her imprint can be seen every spring, driving the roads of Texas, or visiting the nation’s Capital. She was instrumental in making environment issues a priority for our country. She lived a legacy foretold by her nanny when she was given the nickname “Lady Bird.” Lady Bird Johnson truly left a lasting impact through her work, and because of her, we can still call our country “America the Beautiful.”