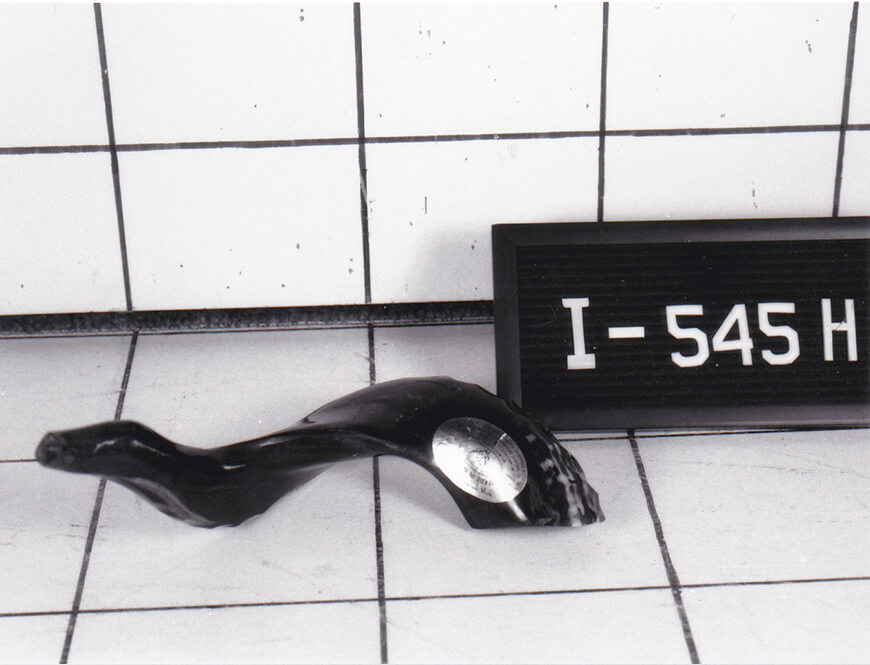 This object is a black shofar made from a ram’s horn. According to the sticker attached to it, this shofar was likely made by the Bar Sheshet family in Israel. The shofar is a Jewish musical instrument that makes a trumpet-like sound. It was traditionally used to announce the start of a holiday, and today is most commonly used on Rosh HaShanah, the Jewish New Year. Because the shofar is such an important part of the Rosh HaShanah tradition it is sometimes referred to as Yom Teruah, or “day of the shofar blast” in Hebrew. Rosh HaShanah lasts two days and the shofar is blown one hundred times each day!

There are four specific blasts associated with Rosh HaShanah:

However, the shofar is not sounded if Rosh HaShanah falls on Shabbat, known as the Sabbath in Christianity.

A Baal Tokea is a person who blows the shofar. “Baal Tokea” literally translates from Hebrew to “master of the blast.” The Baal Tokea often wear a prayer shawl, or tallit, while blowing the shofar. Tallit are worn by men during morning prayer services and all services during Yom Kippur.

During Rosh HaShanah, Jewish people spend the majority of their time in the Synagogue, or Temple. A special expanded prayer book called the ‘machzor’ is used during Rosh HaShanah and Yom Kippur because of the liturgical changes for these holidays. When Jewish people are not in the Synagogue during Rosh HaShanah, they practice other customs and traditions for the holiday, which include: eating apples dipped in honey as a symbol of their desire for a sweet new year and Tashlikh, or casting off, when they empty their pockets into flowing water to symbolize casting off their sins.

The first Jewish people moved to Texas in the 1500s. However, until 1821 people who openly practiced Judaism could not be residents of Texas because Spanish authorities required residents of Texas to be Catholic. Today, there are about 110,000 people practicing Judaism in Texas and there are many more people of Jewish heritage.