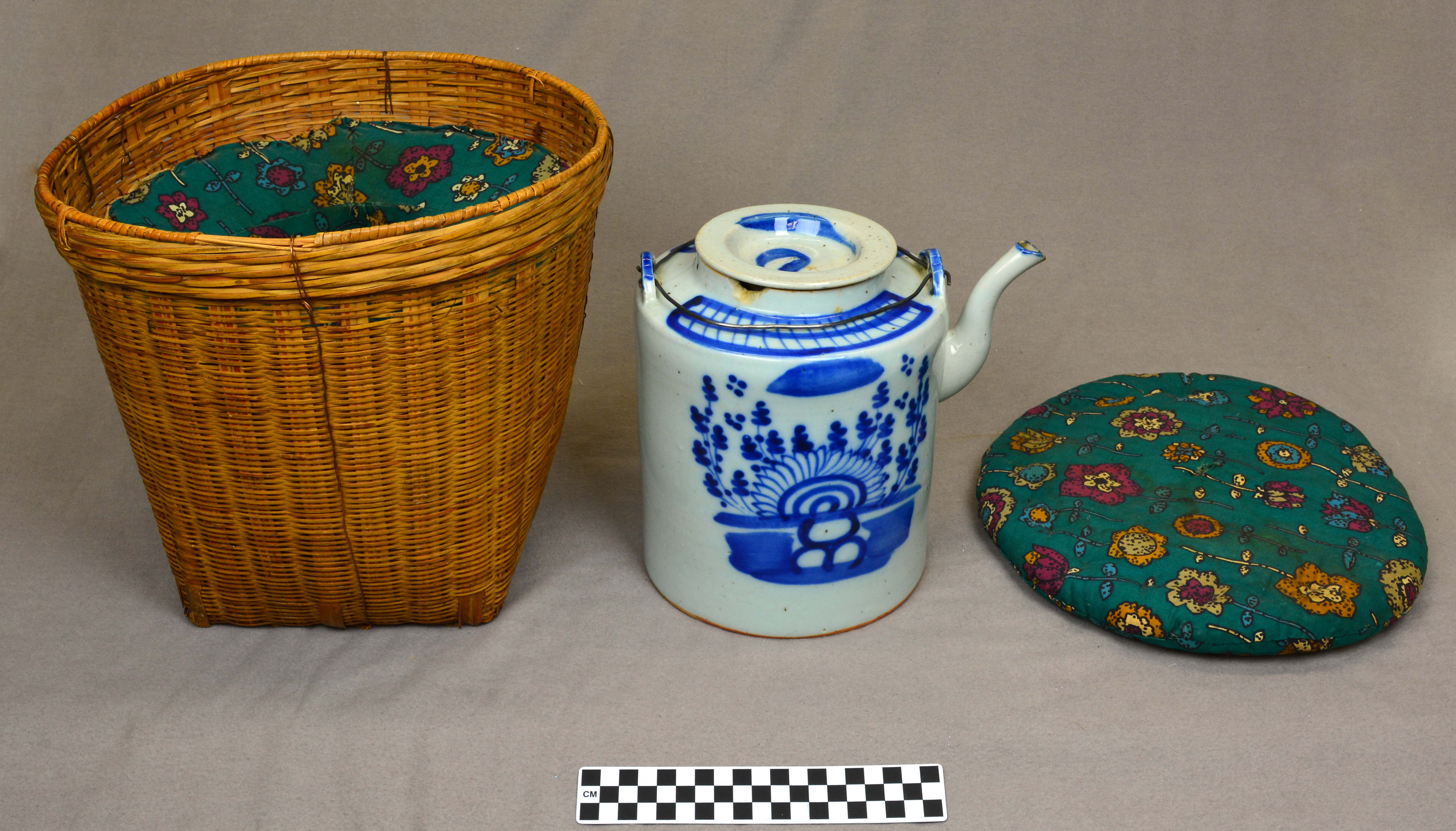 This is a Chinese teapot which was brought over from Southern China by the donor’s father’s family in 1926. The teapot is porcelain with a blue and white design which is similar to “Chinese Export Porcelain”  and was a common way to decorate ceramics during this the early 1900s. The teapot fits inside a custom “cozy” which is a basket lined in straw with a fabric covering. The fabric was replaced by the donor’s grandmother, and is not original the basket. These types of baskets are thought to have been more popular in southern areas of China and were used like modern thermos, to help keep the tea warm.

Tea is a common beverage around the world now, but it is thought to have originated in China. All types of tea come from the Camellia sinensis plant. Camellia sinensis can grow to over 30 feet in height but is usually trimmed to waist height so it is easier to harvest the leaves. The plants generally take about three to five year to mature and be ready for harvest.

Many different types of teas are made from the leaves of the Camellia sinensis plant, the type of tea is determined by how the leaves are processed. White tea is the least processed of any tea produced. Tea “buds,” immature leaves, and the youngest tea leaves of the plant are selected for this type of tea for their mild and delicate flavor. The leaves are simply picked, steamed, and then dried. Green Tea is another non-fermented type of tea, and when prepared has a green to light yellow color, a mild aroma and a natural taste. For the production of Green Tea, the tea leaves are picked, dried, and heat treated to stop the fermentation process. A slightly more processed type of tea is Oolong Tea. This type is produced by partially fermenting the leaves. The exact amount of fermentation will effect the taste of the finished tea. The tea leaves are picked, then intentionally bruised by shaking, and then dried. During the drying process the edges of the bruised leaves turn reddish in color and the surface becomes light yellow due to fermentation and oxidation. After fermenting, the tea leaves are pan fired to stop the fermentation process and create a semi-fermented tea. Oolong is a cross between green and black tea in color and taste. Black Tea is the most processed type of tea and is made by fully fermenting the tea leaves. The tea leaves are picked, allowed to whither and then are either crushed or chopped. Next the leaves are laid out to oxidize and once this is completed they are dried to complete the process.

Camellia sinensis was first cultivated in China possibly as early as the 4th century. Tea was traded to Europe via ship and the East India Company, though the plant itself and the process of how to cultivate the leaves was a guarded secret. During the early 19th century Chinese tea seeds were brought to India in an attempt by the British to break China’s monopoly on tea production. By the 1880’s the tea production and manufacturing in India was well established. Today tea is still a very popular drink, the United States alone is thought to consume over 79 billion servings of tea each year. While once a closely guarded Chinese secret, tea is now produced as far away as Argentina, Kenya, the United States, and Sri Lanka.