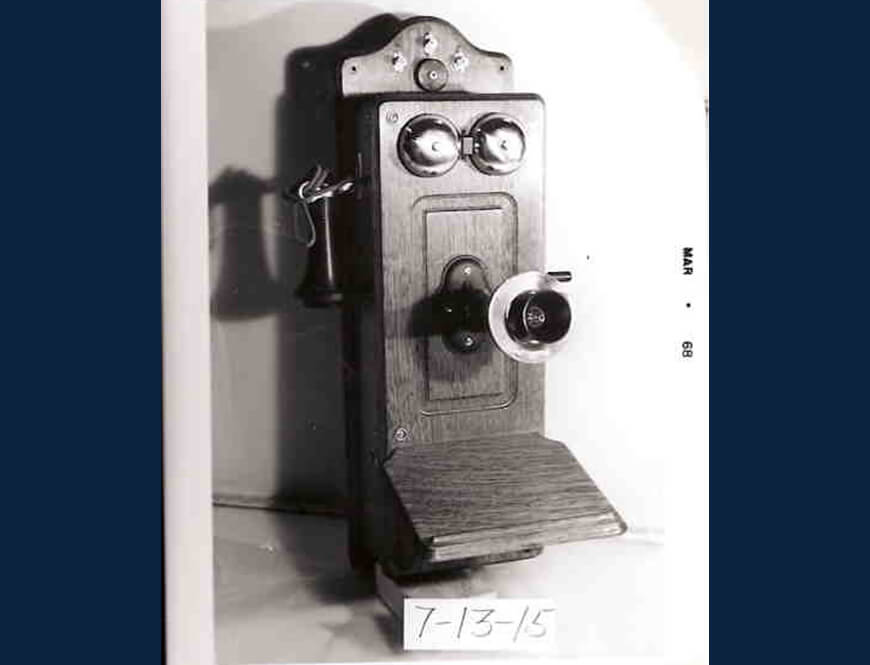 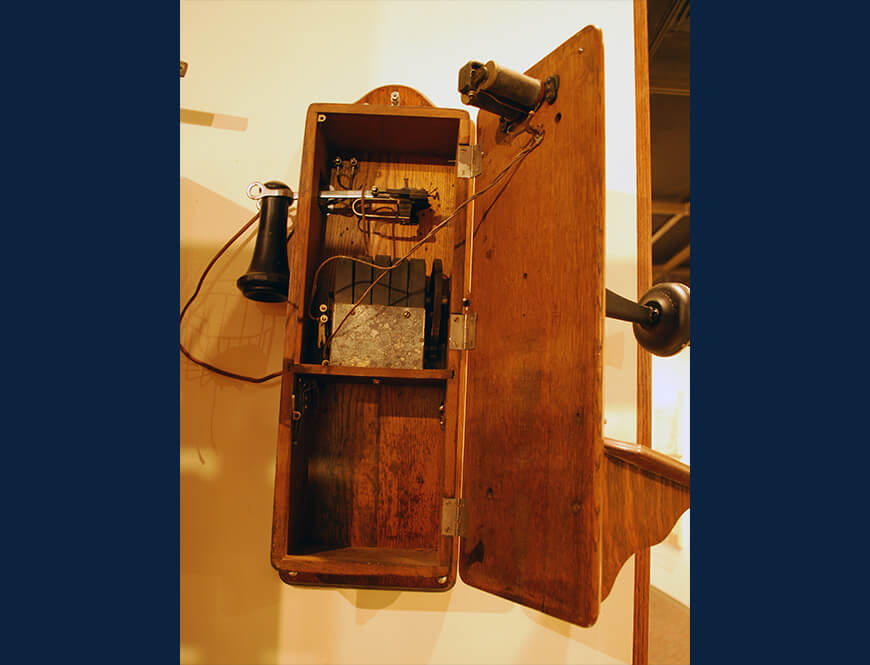 This is a crank-type telephone, in the single box style. This style of phone is sometimes called a “picture frame front telephone” by modern collectors because of the rectangular design surrounding the mouthpiece. The peaked top of this style of phone is sometimes referred to as a cathedral top.  The museum doesn’t have any information on the manufacturer of this particular phone, but based on patent dates and the designs of various pieces, we believe it may have been made sometime between 1908 and 1915 by the Kellogg company. Picture frame front phones were made by many manufacturers from around 1900-1930. Eventually this style of phone would be replaced by dialed phones. One of the challenges in correctly identifying the phone is that it appears that some of the parts have been replaced over the years.

The telephone was invented independently by two groups of individuals, focusing on the electrical transmission of speech. Elisha Grey filed his patent just hours after Alexander Graham Bell and Watson sent in their patent in February 1876. The telephone caught on quickly, beginning to replace telegraphs for communication, first in the business community, then in residential homes. Telephone technology spread fastest in urban centers and gradually into rural regions.

At the most basic level, all telephones must have several key components in order to operate. These include a microphone to pick up sound, a device to convert those sounds to electric signals, a way to transmit the electric signals, and a receiver that converts the electric signals back into sound. In this type of telephone, one would speak into the mouthpiece on the front of the phone and listen through the receiver earpiece, sometimes called a pony receiver, which was attached to the side of the phone by a cord.

Crank-type telephones work by turning a hand crank on the side of the phone, this crank spins a magneto inside the phone. The magneto produces an alternating electrical current, this current then travels through the phone line to ring the bells of the other phones on the same line and, after the introduction of the switchboard, was used to contact the switchboard operator. How long the crank was turned affected the length of the ring, each phone along the line was assigned a specific pattern of long and short rings so that each household could tell if the incoming call was meant for them or not.

The first telephone lines were called party lines, where multiple households were all connected on the same line. Anyone wanting to use the phone would need to wait until the line was available, and privacy was limited, as any household on the same party line could eavesdrop on others conversations. By 1878, the first switchboards opened, allowing phone customers to make calls to people who weren’t on the same party line. Today switchboards are automated, but in their earliest form they required a human operator to physically connect one line with another. Rather than simply dialing a number, early callers needed to verbally tell the operator the city, state and phone number of the person they were attempting to call in order to be connected. As long distance service grew, the lines might be handed off to other operators to make the connections from one system to another.

Initially, phone operators were boys as young as 13, much like telegraph operators. However, due to various issues with such young workers, beginning in the 1880s, phone companies began hiring women to be switchboard operators or “Hello Girls.” In 1900, the phone companies hired unmarried women between the ages of 17 and 26, often directly from high school. Companies even turned to motion pictures to help recruit new female switchboard operators. Phone companies created recruitment films in order to attract potential applicants, such as  “Her Rightful Place” from 1929. These films were meant to show how a career in the telephone industry was a respectable career choice for women.

By 1920 there were over 170,000 operators in the United States, many working in Texas. While the dial system was installed in 1919, manual operators were still necessary in some areas until the late 1970s, especially smaller towns and rural regions. For instance Mrs. Edna Cowey of Westhoff, TX was the town’s only operator, until 1961. Unlike the larger city central offices, the switchboard was located in her home, and she worked at it 24 hours a day, 7 days a week with the help of her children and a neighbor.

Innovation has been a key component of the telecommunications field. Eventually phones would go cordless, at first for military purposes, then in homes. Most people in the United States now have cellular phones, which completely free the user from wires bound to the central office. For more than a century the telephone has changed our lives, the nation’s workforce, and the way we communicate and connect with each other more than any other invention until the arrival of the internet. How has the telephone impacted your life?