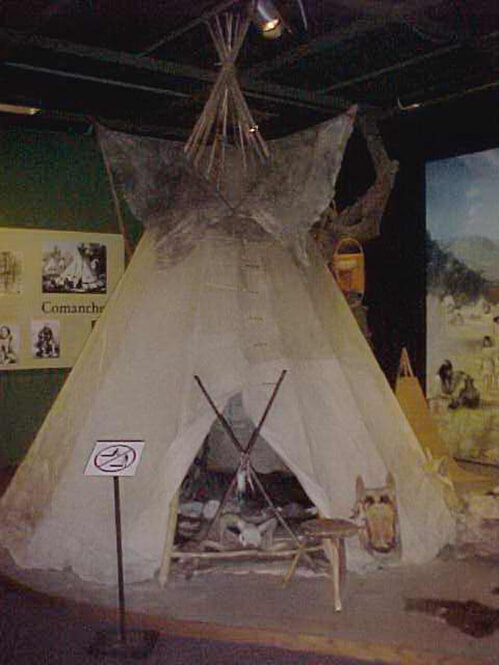 This reproduction tipi was made in the style of the Sioux tribe of Native Americans, by the internationally recognized buffalo expert and tanner, Larry Belitz of Hot Springs, South Dakota. Belitz has been making tipis in the traditional Sioux style since he first began working near Pine Ridge Reservation in the 1970’s, and is one of the best known buffalo hide tipi craftsman of the 20th century. His work has been displayed in over 30 museums around the world. Belitz also served as the technical adviser for a number of  movies, including: Dances with Wolves, Hidalgo, Maverick, and Wyatt Earp.

Belitz utilized ten and a half buffalo hides in the making of this tipi. The hides were sewn together using an awl with sinew for thread. The structure consists of fifteen tipi-poles. Lodgepole pine is often used to make these poles because it is long, straight, strong and lightweight. When making his bison hide tipis, Belitz tries to only use materials and equipment that would have been available to Native Americans prior to 1880. After 1880 most Native Americans had been forced off of their lands and away from their traditional way of life, and as a result may have utilized different types of products and tools. In order to ensure that his reproductions are as historically accurate as possible, Belitz buys buffalo hides from ranchers who do not use brands and skin the animals in the field to reduce the risk of bruising. Following his acquisition of the hides, Belitz preserves the hide in a process called tanning. One traditional tanning technique used by Belitz, that was common among Native American groups, uses animal brains. In this process, called “brain tanning” the tanner mixes brains with water and rubs the mixture onto the hide. This mixture preserves the hide as well as making it soft and supple.

The Sioux nation includes three main divisions: the Lakota (or Teton), the Dakota (or Santee), and the Nakota (or Yankton). These divisions reflect differences in dialect between these different sections of the Sioux nation. Each of these divisions are then sub-divided into smaller groups, sometime called bands. The Lakota has seven bands, the Dakota has four bands, and the Nakota has three bands. Each band has its own leadership and makes decisions independently of other Sioux bands. All of the Sioux are considered Plains Indian people, and their traditional way of life has some similarities to other Plains Indian tribes, like the Comanche. The Comanches were one of the dominant tribes the Southern Plains (and Texas) in the 18th and 19th centuries. The Comanche lifestyle was highly nomadic and depended on the use of horses. Comanches constructed tipis that were made of buffalo hide and stretched over poles, very similar to the tipis constructed by the Sioux.

The Plains Indians lived on the Great Plains in the area from the Mississippi River to the Rocky Mountains and from Canada to Mexico. The arrival of the horse, following European contact with the New World, made life on the vast plains much easier. The Plains Indians learned to be expert riders and utilized horses for raiding and expanding their territory. The use of horses also enabled advancements in buffalo hunting. Buffalo were utilized by the Plains Indians for bedding, canteens, clothing, food, fur robes, glue, parfleches, horse tack, spoons, and many other items. The Plains Indians lived in tipis because they were easily disassembled, allowing for a nomadic lifestyle.