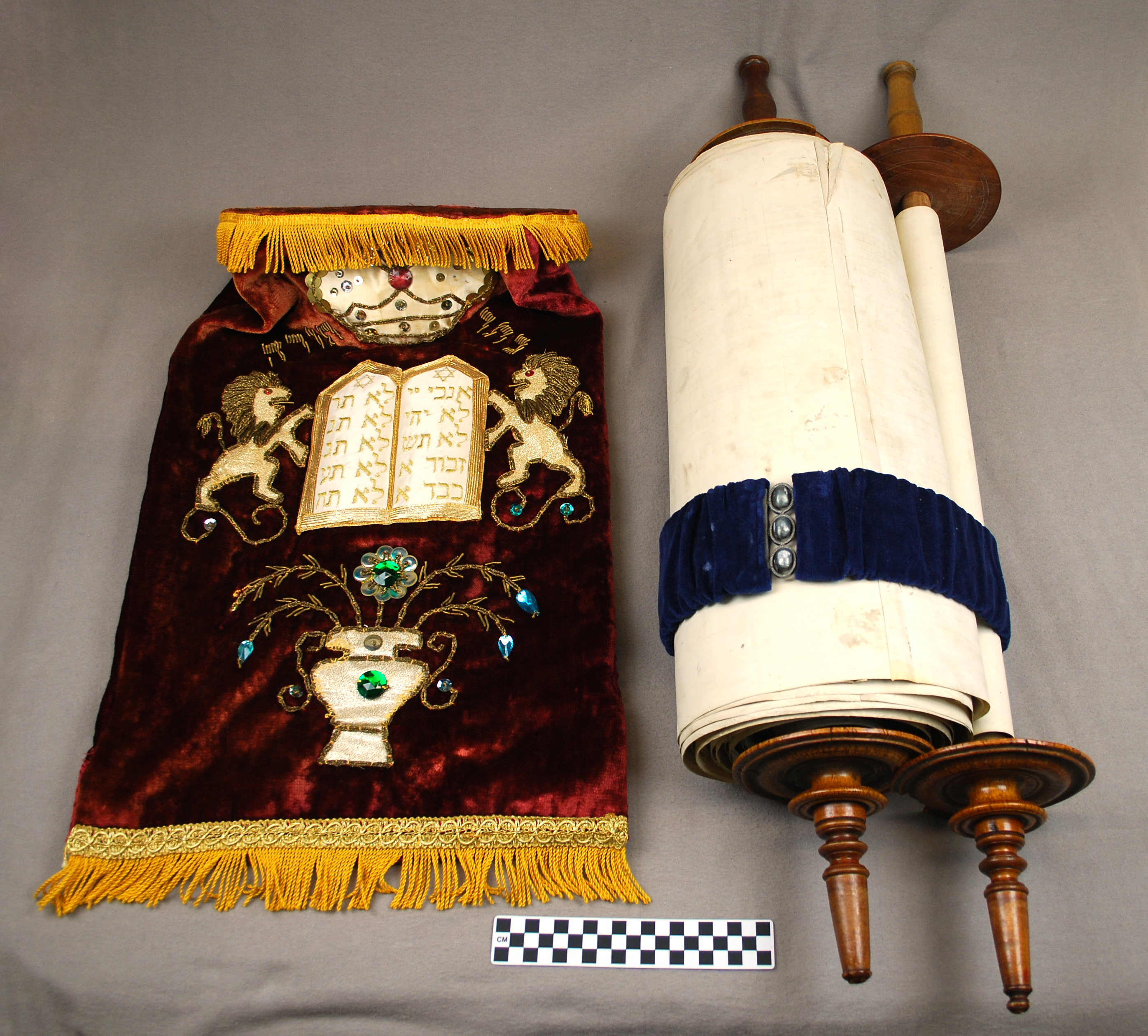 This object is a Torah (Sefer Torah), which is a sacred text for Judaism. The Torah is a scroll that is made of parchment and the pieces of parchment are sewn together with thread. The spindles of the scroll are wood and when stored the scroll is held together by a piece of cloth, traditionally silk, that goes around it and latches to itself. The Torah has a cloth bag (Mantle of the Law) that it is “dressed” in, which is decorated. Typically the cloth used to make these types of covers high quality and is decorated with elaborate embroidered images and other decorations. The bag as two holes at the top for the wooden spindles of the scroll to go through, so that the parchment is completely covered by the bag. This particular Torah was used by the Congregation B’nai Abraham of Brenham, TX and the Jewish congregation of Navasota, TX.

The Torah is written in the Hebrew language and contains the Five Books of Moses (Chumash or Pentateuch) which are: Genesis (Bereishis), Exodus (Shemos), Leviticus (Vayikra), Numbers (Bamidbar) and Deuteronomy (Devarim). The five books that make up the Torah are also the first five books of the Christian Bible. The Torah and the Old Testament contain the same books, but they are presented in a different order. The Torah is one of three parts of the Jewish Bible (Tanakh), the other sections are the Nevi’im (Prophets), and Ketuvim (Writings). The Torah is referred to as the Written Law while the Talmud and Mishna make up the Oral Law. The Oral Law books help to explain the laws of the Torah and how they should be carried out in Jewish daily life. They deals with many topics, including: agriculture, sacred times, women and personal status, damages, holy things, and purity laws.

Due to the religious importance of the Torah, scrolls used for religious services are made from only kosher materials. The animal hide that is used to make the parchment must come from a kosher animal, generally calf hide is used. However, the animal can not be killed specifically for its hide but must either die of natural causes or be slaughtered for food. The sinew of the animal is typically used to sew the parchment pieces together to form the scroll. The needle used to sew the pieces together must be either a silver or gold-plated kosher needle, though gold-plated is the preferred choice. No other metal may be used in the production of a kosher Torah since metal is also used for the production of weapons for war and violence. The feather for the quill that is used to write the text comes from either a turkey or a goose. The ink must be black and again there is a special formula that is used to make the ink kosher.

The materials used to create a Torah are only one part of creating a kosher Torah. The scribe who writes the Torah must be a specially trained individual who is devout and knowledgeable in the laws governing the proper writing and assembling of a Torah scroll. This person is referred to as a sofer or stet (title of a female scribe), which translates from Hebrew as “to count.” For a Torah to be used in a religious context it must be written by a sofer. Part of the scribe’s job while writing a Torah is to count the letters and lines while writing to ensure that nothing has been added or omitted. This counting ensures the accuracy of the Torah text. The sofer/stet must copy directly from a completed kosher Torah. The scribe may not write one letter from memory, they must have a text in front of them at all times when they are writing. There are several other guidelines that must be followed when writing a Torah to ensure that it is kosher. It takes one year to complete a kosher Torah, following this method. Traditionally women were not allowed to become soferim, but in modern times women have become rabbis, which has led to a push for women to become scribes. This is still not a common practice and the most traditional Jewish communities still do not allow women to become rabbis or scribes.

Once the scribe has finished writing, they review and double check their work to ensure the text has no mistakes. A person who is trained in Hebrew may also assist in proofreading the text, this helps to ensure the accuracy of the Torah but also fulfills a Jewish person’s obligation to write a Torah in their life, which is the final commandment of the 613 Mitzvot. Due to the lengthy process and difficulty in writing a Torah, there are other ways for people to fulfill this obligation. A person can proofread a Torah, or fill in a single letter, or help to pay for the writing of a new Torah. These are not universal practices, each Jewish congregation decides what is the best way for a person to fulfill this commandment. Even though women traditionally are not able to write a kosher Torah, they could still copy a Torah for personal use, but there are some who believe that women are exempt from this commandment.

If there is a mistake found when proofreading a Torah, then it must be corrected before the Torah may be used. There are complicated rules that govern corrections to certain words, the name of God being the most critical. To correct a mistake, the scribe painstakingly scrapes dried ink off the parchment, and then removes the rest of the ink residue with an architectural eraser. Finally, the scribe applies chalk to the spot to restore the color and then makes the correction. The Sefer Torah donated to the UTSA Institute of Texan Cultures has an inscription added at the end which states that the Torah was corrected in 1897. A translation of the inscription, provided by the donor, reads, “I corrected this Sefer [Torah] for the Navasoto congregation in the month of Menachem Av, 5657 [1897]. Chaim Schwartz, watchman of the House of Israel in Texas.” We do not know what the correction was, but it is interesting to see this inscription in the scroll.