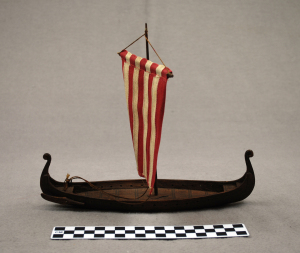 Today Vikings are quite popular, this is in large part due to television and movies. A Viking’s greatest weapon, other than his ferocity, was his warship. Viking ships were not only strong and durable, they were also lighter and faster than other ships. Due to the speed of these ships, Vikings were able to travel vast distances. These superior ships allowed them to establish a vast trade network and even colonize new areas. Ships like the toy above were called drekar, or dragon headed long ships. The secret to these ships was the way in which they were built.

Some famous men who used these ships to travel vast distances in the Atlantic Ocean were Erik the Red and Leif Erikson. Erik the Red was born in Norway in 950 CE. He was most likely given the name of Red because of the color of his hair. Erik’s father was exiled to the Nordic colony on Iceland. Along with his father, Erik’s whole family made the move. However, it wasn’t long before Erik was then exiled himself from Iceland. After his exile, Erik traveled to an uncharted island to the west of Iceland, he would eventually call the island Greenland. Erik, impressed with the country’s land and resources returned to Iceland to spread the word. Able to persuade many to make the move, Erik took 25 ships and headed west. On these 25 ships 500 men and woman were on-board, along with livestock, to establish a new colony. Out of the 25 ships only 14 ships made it. When they arrived two small settlements were established and were known as the east and west settlements.

Like his father, Leif Eriksson was an explorer, but not out of necessity like his exiled father. Leif was the second of three sons of Erik the Red. It is not known when exactly Leif was born but it is agreed that he grew up in Greenland. According to the “Saga of Erik the Red” on his way from Greenland to Norway he stopped in Hebrides and fathered a daughter. Once in Norway, Leif was converted to Christianity by King Olaf I Tryggvason and tasked him with spreading Christianity to Greenland. On his way to back to Greenland it is believed his ship got lost and he ended up in North America in area he named Vinland. However, scholars consider other accounts such as the “Groenlendinga Saga” more reliable, this account states Leif heard of Vinland from a trader who spotted it from his ship but never actually set foot on North America. The exact location of Vinland is unknown and many sites have been cited as the location for Vinland. In the 1960s an excavation at L’Anse aux Meadows turned up evidence of what could be a Viking base camp. This find however, is also contested because it is too far north. Leif Erikson’s time in Vinland would have happened 500 years before Christopher Columbus, that is why many Nordic Americans celebrate Leif as the first European explorer in the New World. Today, October 9 is dedicated as “Leif Eriksson Day.”