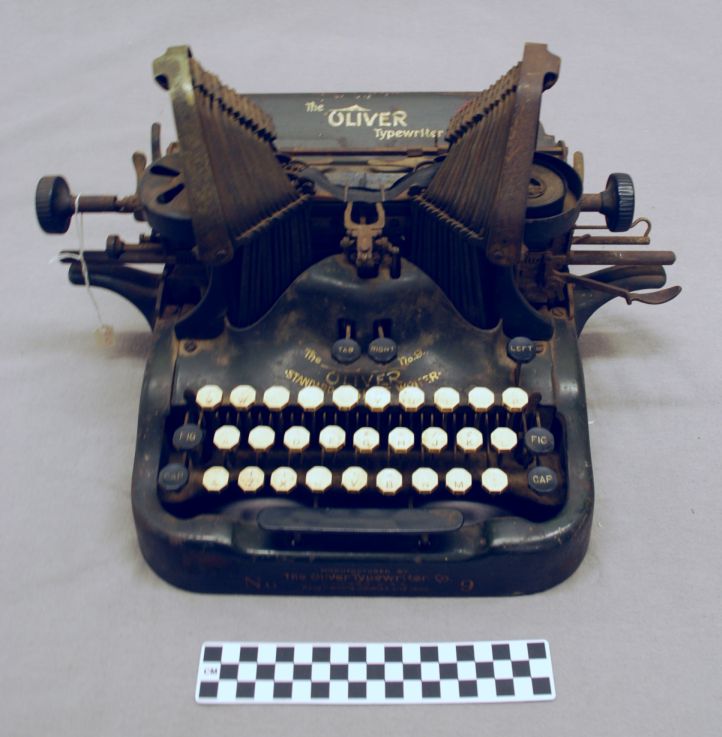 The Oliver Typewriter Company was active from 1895-1928, but licensed its designs to other international firms. It was one of the first “visible print” typewriters, in other words as the typist hit the typewriter keys; they could see what they were typing on the page.

This is an Oliver Model 5, which was in production from 1907 to 1914. It uses a method called down strike, which means the keys strike down instead of from underneath or from the front. This made Oliver typewriters particularly good for carbon copy typing. The “u” shaped bars were larger with each row, swinging down in a unique manner. Eventually down strike and up strike machines would become less popular as more modern front strike machines entered the market.

These typewriters are rather durable, and one can still purchase ribbons in order to use them today, over 100 years after they were built. The particular model we have has the standard olive finish and white keys, and has a metal case cover. Based on the model number, it was made before 1911, after the back space button was added but before 1912 when the serial numbers began with 350000. This was one of the more popular models made by Oliver, and there is also one on display in the Clara Barton Historic site. For more images of Oliver typewriters, you can see a gallery here including an example of the typeface.

There is a strong connection between the typewriter and the introduction of women into office work. By 1880, the typewriter had gained wide acceptance in American businesses. In 1870, before the introduction of a commercially successful typewriter, there were relatively few stenographers and women made up less than 5% of that group in the US. By 1880, the number of stenographers skyrocketed to approximately 5000 and women made up 40% of that number. By 1889, there were over 30,000 stenographers and typists, and more than 60% were female and finally by 1900 women made up nearly 80% of clerical jobs of this nature. This is a remarkable rise in just 30 years.

There are a few contributing factors in the rise of women in clerical positions. The jobs that the typewriter opened up were relatively low-paying, making them less attractive to men. Another key element was the introduction of typing classes at the Young Women’s Christian Association (YWCA). Typewriter companies also began their own typing classes, training young women to type. Women would work in offices to type up official documents from either voice recordings or handwritten materials. Early typists were also tasked with make copies of documents, prior to the widespread availability of copiers and scanners. In larger businesses these workers were part of a typing pool – or a group of typists assigned to mass produce typed documents. These positions emphasized speed and accuracy, and often required typist to type more than 100 words per minute.

Texas was no exception to the trend of women working as typists; and the challenges of using a typewriter inspired one clerical worker in Texas to invent a way to correct the inevitable typos. Since there is no “auto-correct” or “spell-check” on the typewriters, and no “delete” key, mistakes were often obscured with other letters and re-typed. Bette Nesmith Graham of Dallas, TX decided to use tempera paint colored to match the paper to cover her typing errors. By 1967 she had a million dollar business selling Mistake Out, which she later renamed to Liquid Paper.

Though electric word processors and later personal computers edged out the typewriter from home and office use in the 1980s, for 100 years typewriters were a fixture in the business world. Some companies still make typewriters, and recent security concerns have caused some governments to return to typewriters for sensitive documents.