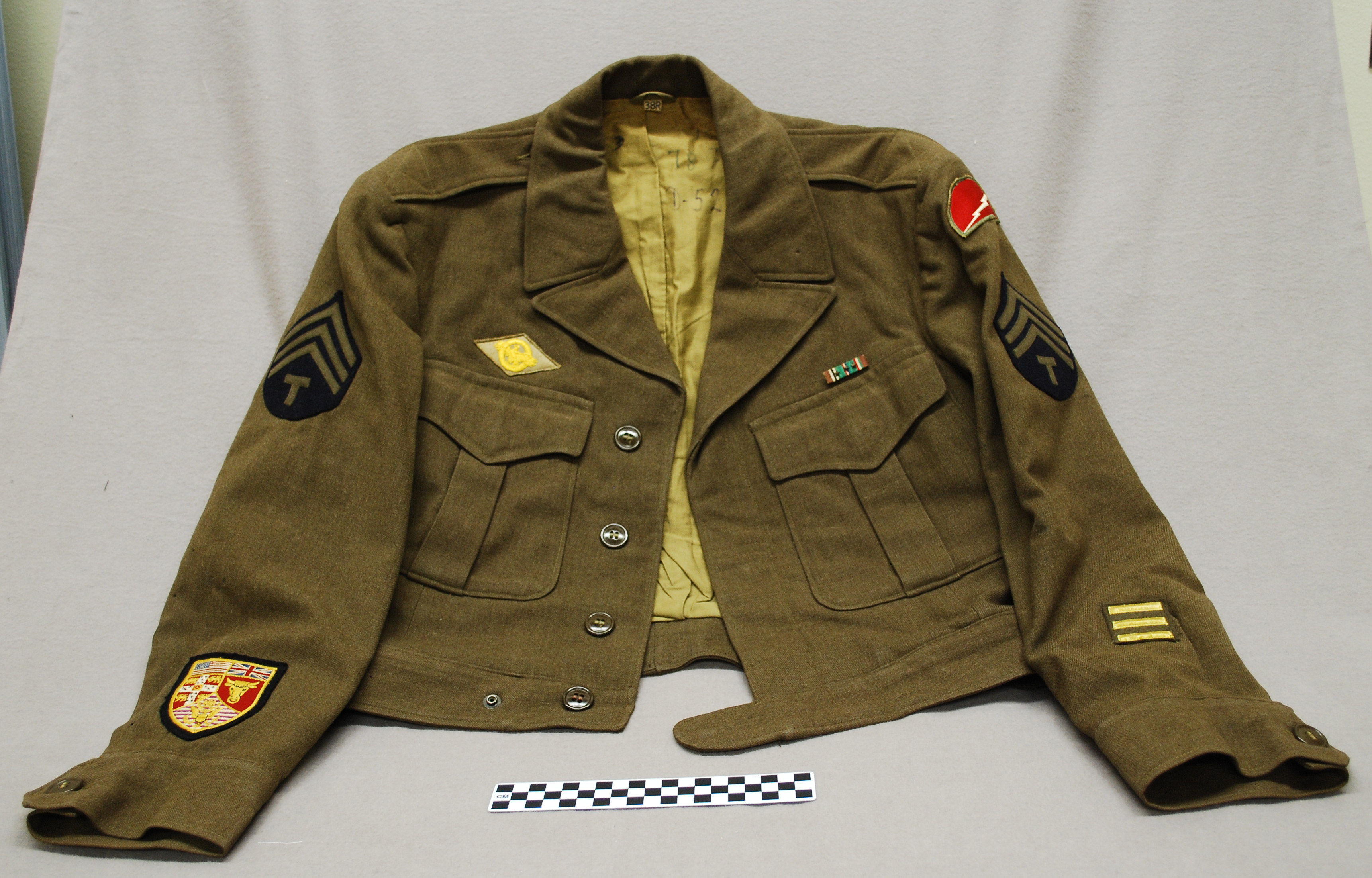 This uniform is from World War II and contains: hat, jacket (pictured), tie, pants, and belt. The uniform belonged to native Texan, Dr. Harold W. Diserens, M.D. who served in the United States Army from 1943 to January 1946. During this time, he was deployed to Europe from late 1944 till late 1945. Dr. Diserens served in the U.S. Army 78th Division Infantry “Lightning” Band.

Military uniforms, like this one, can provide a great deal of information about their owners. For instance, this jacket has a number of patches and ribbons on it that identify the soldier’s rank and tells of some of his experiences. The patch on both arms that has the three stripes over the “T” symbolize Dr. Disernes’s rank of Technician 4th Grade. The European-African-Middle Eastern Campaign Ribbon with it’s three bronze stars over the left breast pocket indicates that he served in 3 campaigns, which we know from his service record were served in the European theater. The three gold bars on the bottom left sleeve represent three 6-month tours. The diamond shaped patch over the right breast pocket with a golden eagle with a circle around it is known as the “Ruptured Duck” and was only issued to those who were honorably discharged. The patch on the left shoulder that is a red semi-circle with a white lighting image is the unit insignia patch for the 78th Division Infantry.

The 78th Division Infantry was first activated on August 23, 1917 and  consisted of four infantry units and three artillery units. During World War I the 78th served in France and was involved in two of the major campaigns of WWI: St. Mihiel and Meuse-Argonne. The St. Mihiel campaign was fought southeast of Verdun, France and took place from September 12 to September 16, 1918. The Meuse-Argonne campaign was fought immediately north and northwest of the town of Verdun on September 26 to November 11, 1918. At the end of WWI the 78th was demobilized in June of 1919. It was during WWI that the 78th became known as the “Lightning” Division. The French likened the battles of the 78th Division to a bolt of lightning, leaving the field blood red. Thus the insignia for the 78th became a single streak of lightning across a red field.

When the United States entered World War II, the 78th was reactivated on August 15, 1942 and was used as a training unit for two years before entering into combat in the European Theater. The 78th took part in the European-African-Middle Eastern Theater which was treated as a separate war from the Asiatic-Pacific Theater. There were three campaigns that the 78th took part in during the war and they were Rhineland, Ardennes-Alsace, and Central Europe. The Rhineland campaign took place from September 15, 1944 to March 21, 1945 and was along Germany’s defensive line from Holland to Switzerland. The Allies were able to break the defensive line due to the success of the Ardennes-Alsace campaign which is better known as the Battle of the Bulge. This campaign started on December 16, 1944  and concluded on January 25, 1945. The Ardennes forest is located primarily in Belgium and Luxembourg, but it also extends into France and Germany. The Central European campaign took place following The Battle of the Bulge, from March 22, 1945 to May 11, 1945. When Germany officially surrendered on May 7, 1945, the 78th became part of the occupational forces that stayed in Germany. The 78th was then deactivated again on May 22, 1946. In November of 1946 the 78th was reactivated and in May of 1959 it was reorganized as a training division.