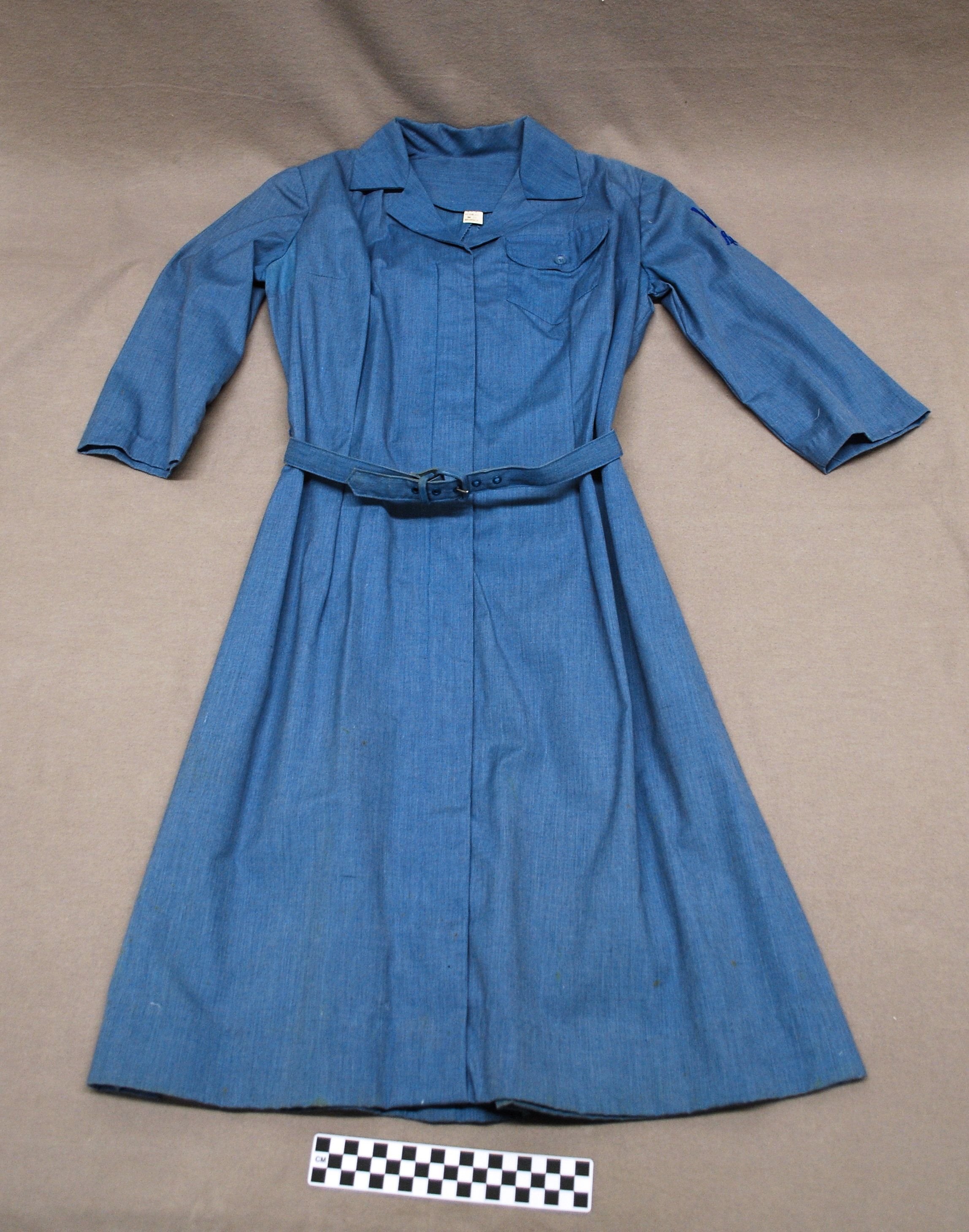 This uniform is from the Ladies’ Auxiliary of the Veterans of Foreign Wars (VFW) organization. The dress is made from blue polyester. It has ¾ length sleeves and is approximately knee-length. This uniform belonged to a member of the Ladies Auxiliary VFW Post # 8786 in Freer, Duval County, Texas. Freer is located south of San Antonio, halfway between Laredo and Corpus Christi.

The VFW is an organization that supports veterans who have served in foreign wars. It dates back to the turn of the 20th century as veterans of the Spanish-American War and the Philippine Insurrection found themselves in need of aid and benefits. There were no pensions or medical care for the veterans of these wars, and by 1915 the membership was in the thousands. By the 1930s membership was over 200,000. This organization advocates for health care, education, and when necessary, compensation for military personnel.  They also participate in a number of service projects and provide a space for veterans to gather together with others who understand them. Their mission is to “Foster camaraderie among United States veterans of overseas conflicts. To serve our veterans, the military, and our communities. To advocate on behalf of all veterans.”

While the donor’s mother was a member of the Ladies’ Auxiliary, she helped to raise money for community projects by selling barbeque, running bingo games, and holding bake sales. These funds were used to fund scholarships for local Freer residents, and purchasing supplies for veterans. Each year they used to put together boxes for the veterans in the VA hospital in San Antonio. Lastly the funds were used to help out the families of veterans in need. The uniform is accompanied by a matching belt, hat, medals and membership cards from 1968 – early 2000s. [Christine Moscardini-Hall, edited by Kathryn S. McCloud]

Bottoms, Bill. 1991. The VFW: an illustrated history of the Veterans of Foreign Wars of the United States. Rockville, Md: Woodbine House.

_____. 2008. Women at war from the Revolutionary War to the present: a special publication of VFW magazine. Kansas City, MO: VFW Magazine