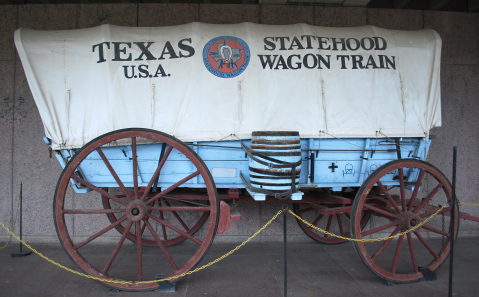 This object is a reproduction of a 19th Century covered wagon. It was gifted to the museum on November 20, 1976 by the American Revolution Bicentennial Commission of Texas. It was the second wagon in line as part of the Southern route wagon train for the Bicentennial Pilgrimage.

In 1976, the United States celebrated its 200th birthday with festivities across all fifty states. In a monumental effort to bring the nation together, an idea was created that would involved every state, a year-long nationwide wagon train pilgrimage. A pilgrimage is a journey in search of moral or spiritual significance.  For the Bicentennial Celebration, it was a way to reaffirm the founding morals of the country. Each state sponsored an authentic covered wagon, which would be represented on a wagon train to Valley Forge, Pennsylvania.

In total, there were five separate trains, recreating five distinct historic routes in westward expansion– the Northwest route, the Southwest route, the Southern route, the Great Lakes route, and the Colonies route. The Texas covered wagon was part of the Southern route, along with nine other wagons. The Pilgrimage represented a replay of history in reverse, with all of the wagon trains meeting up at the birthplace of the nation in Valley Forge, on July 4, 1976.

During a time when the country was frustrated and tired from government scandals, the Bicentennial wagon train was designed to reach out to communities and rededicate the country to the founding ideals and principles of the United States. This was a way to bring people together at every level- federal, state, local, and within communities. Participants could commit themselves to the entire duration of the wagon train, or they could join for shorter periods of time. The idea was particularly to get entire families involved- some families even pulling their kids out of school to participate.

The wagon now housed at the UTSA Institute of Texan Cultures was a gift from that pilgrimage. It is the original Texas wagon, which was driven by Hazel Bowen, a native Texan and horse-handling expert. After the Bicentennial celebrations ended, Hazel drove the wagon back to Texas, and a few months later, was able to drive it once again through the streets of San Antonio. On November 20, 1976 Hazel, escorted by the 1st Cavalry of the United States Army, drove the wagon from Freeman Coliseum, through the streets of downtown San Antonio, and parked it on the grounds of the UTSA Institute of Texan Cultures. This historic covered wagon has been on permanent display since then.