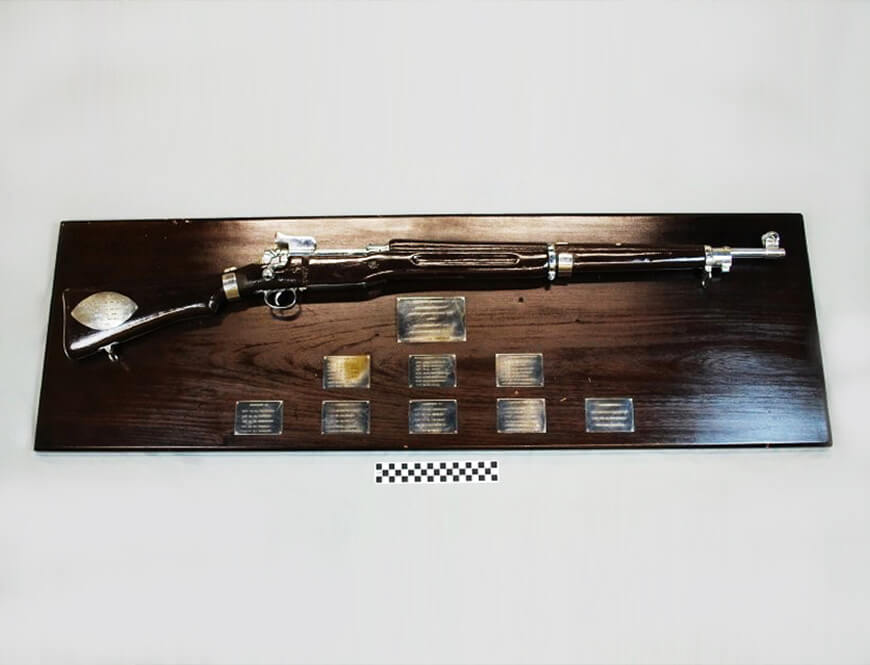 This object is a M1917 Enfield rifle mounted on a commemorative wooden display donated to the ITC by Colonel William Mastoris Jr. The object was originally gifted to Colonel Mastoris by his company in honor of his leadership as a lieutenant colonel during the Vietnam War in 1968.

Ten metal plates on the gun and the wooden display board tell us more about the leadership of Colonel Mastoris and the respect he earned from his company. A large silver plate on the rifle’s stock reads, “Captured by Co B, 4th Battalion, 12th Infantry, 199th Infantry Brigade on 7 April 1968, Near Tay NINH, Republic of Vietnam.” Nine other square plaques are mounted to the display board below the gun. The largest of these reads, “LTC William Mastoris, Commanding Officer January 1968 to July 1968, from the Officers of the 4th Battalion, 12th Infantry, 199th Infantry Brigade.” The smaller eight plates list the names of the officers from Col. Mastoris’ Company who gifted the rifle. The rifle and the commemorative plaques offer a lot of information to be explored, including the origination of the M1917 model rifle, the life history of this particular rifle, and the life and leadership of its eventual owner.

When the United States entered the First World War in 1917, the US military needed guns and ammunition to support the troops they were sending to the Wars’ the Western Front in central Europe. The United States rifle companies, Winchester and Remington, had been manufacturing infantry rifles for British allies since entering the War in 1914. The US Army Ordnance Department supervised these two companies to manufacture a new model of the rifle with a .30-06 caliber ammunition. The M1917 Enfield rifle was manufactured by Remington Arms. This particular rifle was made at the Eddystone Rifle Works in Eddystone, Pennsylvania and used by US infantry troops in 1917 and 1918.