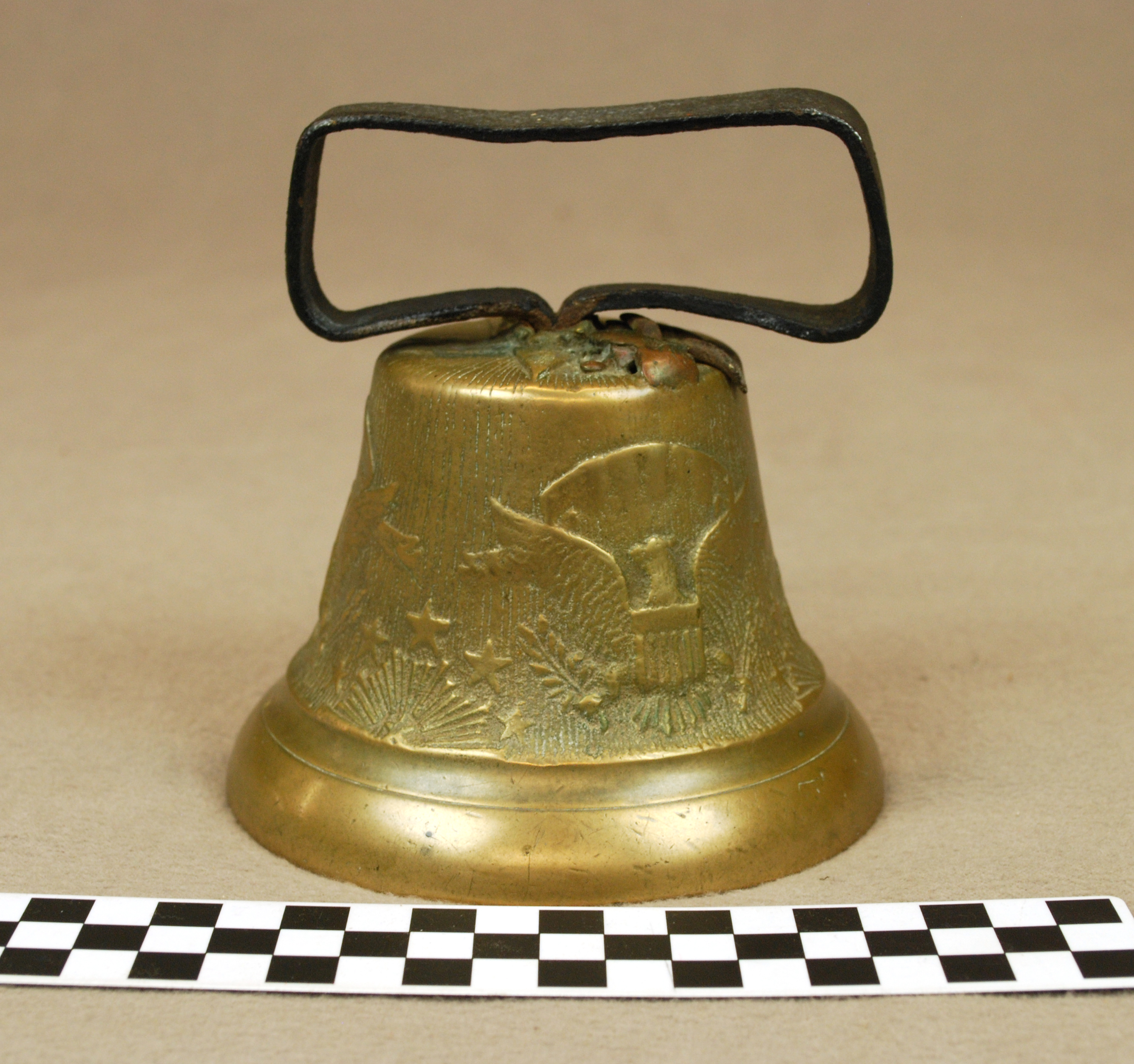 Today cars, buses, planes and ships have made it fairly easy to travel from one place to another. As technology advances so do the speeds of many of these transportation devices. However, in the mid 1800s getting from one point to another was difficult. For the United States Army who had to travel from one place to another on foot or horseback, travel was long and hard. Travel time on horses depended on a variety of factors, such as water and terrain. The route the army had to take depended on where water was located for the animals but this often made the journey longer. Seeking a solution to the transportation problem, the United States Army tried an experiment using camels instead of horses for a brief period of time. This object is a reproduction bell like the ones that were used on these camels.

Before railroads crisscrossed the nation there were very few routes available to transport goods and people in the sparsely populated western states. It was thought that camels, being specially adapted to going long distances in harsh terrain with minimal water needs, might be an ideal solution. So in 1853 Jefferson Davis, at the time serving as the Secretary of War, put out his annual report suggesting that camels could be a potential solution to the transportation problem. He was not the first person to suggest this, in 1836 Major George H. Crosman first suggested the use of camels after his experiences in the Black Hawk and Second Seminole wars. Also advocating the use of camels was George R. Glidden an archaeologist who had spent time working in Egypt wrote to the Senate Committee of Military Affairs in support of the use of camels. His main argument for using camels instead of mules was that camels would drink almost any kind of water, even brackish water.

It was not until Davis became Secretary of the War Department that camels were seriously considered for military transportation. However, he first tried to solve the water shortage problem along the routes by building additional wells, but failed. Davis stated that camels were used in other parts of the world where the environment was less than ideal. He believed that the dromedary camel could be used in the “carrying of expresses, making reconnaissance, and moving troops rapidly around the country.” So in the early months of 1855, Davis was granted 30,000 dollars to be used in the camel experiment. Davis was able to send a ship to North Africa and the Levant to purchase the camels that would be put to the test. The project was overseen by Major Henry C. Wayne.

Major Wayne learned a lot about the camels while on the expedition. He learned about the camel’s hump and how it was made up of gelatinous fat which provided the camel with sustenance when it was deprived of food. The camel was able to travel long distances, almost 60 hours non-stop if need be. He learned that the camel traveled well on leveled land and did fair on mountain and valley travel. Camels had calloused soles which enabled them to travel on sandy soils but weren’t well suited for wet clay and mud. Traveling through different terrains and plant life, the camel ate almost any kind of shrubs, even thorny ones. Camel meat was edible and resembled beef, and the milk it provided was similar to a cows. A camel was able to travel six to seven days without water which would solve the issue of not having water on the routes used in the United States.

After hiring people to serve as camel attendants and saddle makers, 33 camels made their way to the Texas coast on February 11, 1856. Having money left over from the expedition, Davis sent for more camels and on February 10, 1857 forty one more camels landed in Indianola, Texas. The camels were sent to join the first shipment northwest of San Antonio. Most of the camels were in overall good health except for few camels who had swollen legs from the long journey. The camels were marched west several miles at a time to help them get adjusted to their new home. The camels were moved from camp to camp until a perfect settlement was found in Camp Verde, Texas. The camels overall proved to be useful, being able to carry up to 600 pounds, and got accustomed to the terrain. There was also some mishaps with the camels as some got sick, and others had bad tempers. Many horses panicked around camels and soldiers did not want to be near them.

In February 1861 Confederate forces took over Camp Verde and with the U.S. Civil War about to break out, no one knew what to do with the animals. For a while the camels were used to travel to Arizona and California and carry supplies and messages. Some of the camels were used to give rides to children, and some were put on auction. Even though the camels proved to be useful, the people who were going to be using them were not convinced. They believed the camels could not make a difference and thought of them as a nuisance. Jefferson Davis who was the main advocate for the camels became President of the Confederate States and could no longer focus on the camels. The camel experiment ultimately failed and the soldiers continued to use horses, eventually upgrading transportation devices as technology advanced.