Object: Book (From Bethlehem to Golgotha) 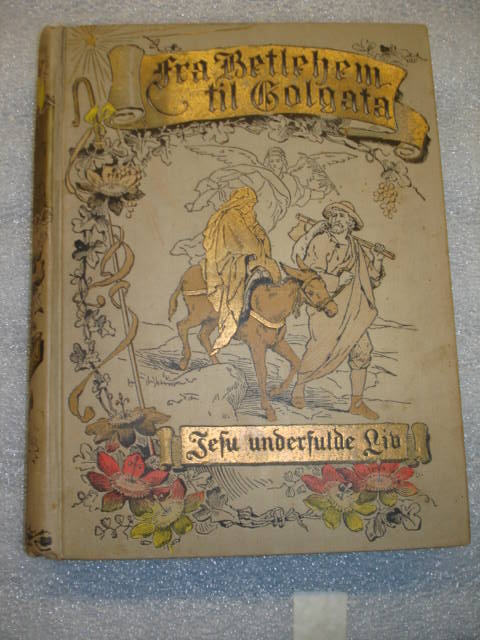 This is a book of religious stories written in the Norwegian language. Norway is predominantly a Christian nation, with its established Church of Norway. This book was printed in 1893, and is titled Fra Betlehem till Golgata, which translates to “From Bethlehem to Golgotha”, the sites where Jesus Christ is believed to have been born and crucified. The cover of the book depicts Joseph leading the donkey that carried the Virgin Mary while she was pregnant, on their journey to Bethlehem where Jesus Christ was born.

Similar to other European immigrants that came to Texas, Norwegian immigrants came to the state and settled as farmers as they were rural farmers back in Norway. They came looking for economic opportunities in Texas as there was still large amounts of farm land available. Johannes Nordboe was one of the first known Norwegian to settle in Texas. Norwegian immigration and settlement continued from the 1840s until 1872, with one of the most important Norwegians settlements in Bosque County. But the first real Norwegian settlement was Brownsboro in Henderson County, established in 1845.

From the late 19th century through the early 20th century, Norwegian-Texans continued their traditional culture and way of life of their ancestors. However, the Norwegian language has since died out amongst most Norwegian-Texans, as their descendants integrated into Texas life and culture. However, this book is written in Norwegian, and was published in 1893. Demonstrating how Norwegian-Texan communities still followed their traditional culture, including speaking Norwegian language rather than English even after immigrating to the United States.